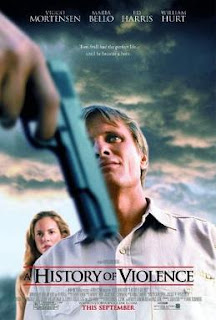 Cronenberg’s films redefined ideas around body horror. And one of his most accessible – and perhaps one of his richest and finest – films takes these ideas to another level by looking at the lasting – and damaging – impact of violence. That’s not just the immediate, visceral impact either – and lord knows Cronenberg doesn’t shirk on that here – but also the intense, long-term psychological impact and how it shapes entire lives. A History of Violence is a brilliantly told and superb piece of film-making that mixes thought-provoking content with a gripping, Western-tinged plot. It’s got a claim to being one of the best American films of the Noughties.

Tom Stall (Viggo Mortensen) is a regular Joe in a very small town in rural America. Running a small café, he lives a blissfully happy life of Americana with his wife Edie (Maria Bello), a lawyer, and their two children Jack (Ashton Holmes) and Sarah (Heidi Hayes). Their world changes forever though when Tom’s diner is held up late at night by two ruthless killers (Stephen McHattie and Billy Orser) and – with an instinctive ruthlessness – Tom ruthlessly dispatches the killers and saves the lives of his co-workers and patrons. His heroism makes him a local hero and brings plenty of excited press attention – but why does Tom seem so uncomfortable with this? Could it be linked to the swift arrival in the town of big-city criminal Carl Fogarty (Ed Harris) who claims Tom is none-other than Joey Cusack, psychopathic hoodlum from Philadelphia who gouged out Fogarty’s eye? Are Tom and Joey one and the same? And how will the doubts affect Tom’s family?

Cronenberg’s film brings brilliant tension to this question of identity, setting it in a very modern-feeling Frontier town, which has more than a sense of a classic John Ford western town, complete with disturbance from murderous figures from outside, shattering the peace. But the film adds that distinct Cronenberg touch by suggesting that, behind the quiet diners and picket fences, the real danger may already be at the heart of the town. Is Tom who he claims to be? Or is he a malignant dark force at the centre of the town (and his family) bringing destruction to everything? What other dark truths, you can’t help but think, might be hiding behind those shutters?

But then that’s what you get with violence. It taints and ruins everything it touches. Innocent lives are shattered. Families and loved ones are left mourning. But it also twists and shapes the personalities of its perpetrators. It marks them and changes them, washing out positive qualities and leaving those who use it the most drained, empty and uncaring. The film opens with a chilling long shot as McHattie and Orser check out of a motel. Cronenberg keeps the camera still and holds the camera still to study the casual body language and chilling lack of engagement of its killers (“Why the delay?” “I had a little trouble with the maid”). The scene continues for an agonising length, making us dread the reveal of what these clearly dangerous, amoral men have done in this motel – the reveal eventually shown with a clinical precision, which serves as an entrée to even greater horrors.

The final killing in the motel is the last time the film will shy away from the immediate horrors of violence. Even Tom’s heroic slaughter of the killers to save lives doesn’t shirk from showing us the impact on the bodies of the killers as Tom dispatches them – bodies torn apart by bullets, with McHattie’s killer left with most of his lower jaw destroyed beyond recognition. Later we’ll see the impact not only of bullets, but also the jerking death spasms of those who have had their noses smashed into their faces, necks snapped or bullets pass through their heads. Never is this glorified – and never are we allowed to simply categorise some killings as good or bad. No matter who it is, the human body will still suffer staggering trauma.

But violence’s impact isn’t only physical. As Tom’s increasing comfort with using his natural propensity for brutal killing (“Have you never asked, why is he so good at killing people?” Fogarty asks an Edie still in denial) grows, so violence takes over his family and starts to shape the actions and decisions of those around him. Arguments become more regular and more visceral. Tom’s gentle son brutally beats his bully at school. The loving father Tom suddenly slaps him across the face. Edie and Tom’s blissful life – we see them playfully making love on a date night – degenerates into conflict, distrust, flashes of violence and finally an angry, intense and passionate sex scene on the stairs that is an exact mirror image of their earlier love scene.

Edie is, for all her horror at Tom, partly excited by finding her husband has such a capacity for danger and brutality. That’s the dark attraction of violence in this film: it reveals secrets about ourselves. Tom seems to subtly shift within conversations from the gentle Tom into the chillingly distant Joey. Worst of all, the more that muscle is stretched the more Tom seems to take comfort and enjoyment in it. Taking what we want, with no regards for the consequences, is liberating and makes us feel strong. No wonder it’s so attractive. And no wonder violence has so shaped and defined humanity’s history. It tends to get people what they want and it can feel good. And it looks cool. Because despite the horrors of the impact of the violence, Cronenberg is also honest enough to admit that it’s exciting.

At the film’s centre is a superb performance of cryptic unknowability from Viggo Mortensen, in possibly his finest role. Mortensen uses micro expressions, small beats and body language that moves between casual and chillingly precise to show two personalities in one body. And Mortensen also demonstrates the struggle between these – between the man he wants to be and the man he might well be. He’s equally matched by Bello, wonderful as a woman who finds her whole life destroyed but can’t shake an unnerving attraction to this man of danger who has suddenly emerged.

The entire cast are pretty much faultless. Ed Harris gets a decent role of gruff menace, but the film is almost lifted in a final act cameo by William Hurt. Oscar nominated for (what amounts to) less than five minutes of screen time, Hurt is simply a force of nature as a Philadelphia crime boss kingpin, purring out his lines with all the fury of a caged lion, mixing a readiness for violence with a darkly comic menace. It relaunched Hurt’s career as a leading character actor – and arguably he should have nabbed the Oscar for it.

Cronenberg’s film engages with ideas of identity throughout. What defines us? The things we’ve done? The choices we’ve made? How many years need to pass before we can say that we’ve changed? What makes us better? And can we decide the sort of people we want to be? It’s impossible to say for sure. If your whole family life is founded on a lie, how do you know what about yourself is true or not? These are fascinating questions and the film offers no easy answers at all. Can Tom return to the life before a violent history shook everything up – perhaps he can, perhaps he can’t. But one thing’s for sure (and Cronenberg makes clear) it won’t be a simple overnight fix and a Hollywood ending. For all the hoodlums Tom dispatches, the real damage is on the workings of his family and the real casualty is the life his family thought they had. And those wounds don’t heal.