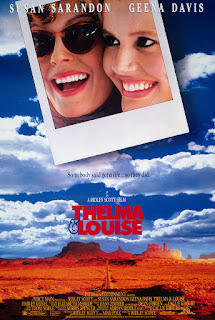 Two people on the run, dodging the police and doing what they can to survive. It’s a well Hollywood has gone back to time and time again. But in most cases the people were either two men, or maybe a man and a woman (romantically involved naturally). It was unheard of to make that most masculine of genres, the outlaw road movie, into one led by women. But that’s what we get here, in a movie that has become iconic in more ways than one, Thelma and Louise.

Louise Sawyer (Susan Sarandon) is a tough, independent-minded waitress. Thelma Dickinson (Geena Davis) is a shy housewife, whose husband Darryl (Christopher McDonald) is a jerk. With Darryl away for the weekend, Thelma and Louise head off for a weekend away together, to let their hair down and feel a bit of freedom. Unfortunately, disaster happens when Thelma flirts with a sleazy guy in a Texas bar (Harlan Puckett), who tries to rape her in the car park. Louise saves her – but guns the guy down. The two women now find themselves on the run from the law, terrified that no one will believe their side of the story. But as the women find themselves on the road, the experience changes them, with Thelma flourishing in an environment where she can make her own choices and Louise becoming more able to open herself up emotionally. But can they stay ahead of the law?

With a terrific (Oscar-winning) script from first-time writer Callie Khouri, Thelma and Louise offers a dynamic and daring twist on the Hollywood road movie. By placing women at the centre of a story like this, a fascinating new light is shed not only on the law, but also on the culture of the American South. It also gives what would otherwise be familiar situations, a fascinating new light as two underestimated people are forced to prove time-and-time again how ahead of the game they are.

Ridley Scott directs the film with a beautiful, confident flourish. The John Fordian iconography of the West is a gift for a painterly director like Scott, and this film hums with the sort of eye for American iconography that only the outsider can really bring. The film brilliantly captures the dusty wildness of the West as well as the neon-lit grubbiness of working class American bars. It looks beautiful, but also vividly, sometimes terrifyingly real. Scott then, with a great deal of empathy, builds a very humane story around this, with two characters it’s nearly impossible not to root for.

He’s helped immensely by two stunning performances from the women in the lead roles. Susan Sarandon’s is perfect for the brash and gutsy Louise, not least because she’s an actor brilliantly able to suggest a great emotional depth and rawness below the surface. Louise is a women juggling deeper traumas – past experiences (its implied a historic rape) that leave her in no doubt that the justice system will not be interested in hearing about a woman’s suffering. It’s the hard to puncture toughness that softens over the course of the film, as Louise becomes more willing to explore her emotions and allow her vulnerability to show. 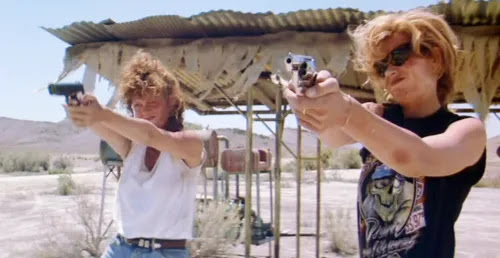 Placing these two women at the centre of a story like this puts the feminine perspective front-of-centre – and it’s alarming to think how little some things have changed. Can we imagine today that there wouldn’t be policemen and lawyers willing to blame Thelma – or claim she asked for it – for her near rape in a bar? Or that there wouldn’t be a fair crack of the whip in the system for Louise for gunning down an unarmed rapist? On top of that, the majority of the police tracking the two women (with the exception of Harvey Keitel’s decent cop – Keitel is very good in this) find it hard to take “these girls” seriously, finding it hard to imagine them being anything other than a joke.

Mind you the attitudes of men are laid bare at every turn. Thelma’s husband Darryl (a very good performance of selfish patheticness by Christopher McDonald) is a waste of skin, a man who can’t imagine a world where Thelma could be his equal. Timothy Carhart is all charm until Thelma denies him the sex he believes he was due for in exchange for a night if flirting and drunks, and promptly turns extremely nasty. The cops – gun totting with itchy trigger-finger – just seem to be waiting for an excuse to throw the ladies down. Even JD (a star marking early performance by a deeply attractive and charismatic Brad Pitt), who seems so charming – and proves the sort of generous and skilled lover Thelma has never experienced in her life – has no qualms about robbing the ladies of their life savings, leaving them hung out-to-dry.

Many men at the time complained (pathetically) about the presentation of men in this film (as if men haven’t had any films where they were sympathetically placed front and centre), but I think it’s a pretty clear judgement that women are not held to the same standards. Khouri’s script shows time and time again the casual sexism (and sexualisation) the women encounter – to the extent that when they finally confront (and pull guns) on the sexist, aggressive truck driver who has been following them for most of the film, you cheer along with them when they shoot out first his tyres, then his oil tanker. We’ve even had a warm-up with Thelma turning a tough intimidating cop into quivering jelly by taking control of the situation.

But that’s what this film is about – the unexpected taking control. Because this isn’t just a feminist statement because it puts women into a male genre. It does so by showing how few choices these women have in their lives before they take into the road and how liberating it is to be able to make their own choices. Because these characters have had all their choices made by men, from Thelma’s smothering marriage to Louise’s undefined past as a victim. And their futures are as much out of the control, likely to find themselves on death row for shooting a rapist. On top of all that, men continue to see them both as sex objects.

How could you not be moved by this? It’s why the films iconic ending carries such impact. These are women discovering they have the power to make their own choices and their own mistakes. It has an undeniable power to it. It’s a power that runs through the entire film, perfectly shepherded by Scott’s astute and sharp direction, with Davis and Sarandon superb. It will still give you shocking insights today into what life is like for women in a world still dominated by men.

More recently its writer and stars pointed out that the film actually ended up changing very little for women in Hollywood. There was no new wave of daringly different female-led movies, with “women’s drama” still mostly restricted afterwards to family drama and romances. There are still few exciting opportunities for female filmmakers. (And it’s a sign of the times back then that the very idea of a woman directing this feminist film was never even raised as a possibility.) Perhaps that’s why Thelma and Louise remains such an icon, because it’s still such a one-off. Either way, it’s a film that hasn’t aged a day since it was released.