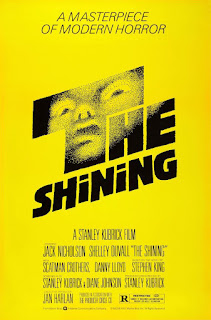 I’ve often had mixed feelings towards Kubrick’s films. He’s impossible not to admire and there is no doubt many of his films are landmarks in cinema. But I’ve also often found him a brilliant technician, a striking intellectual but an emotionally cold and distant director, who seizes the brain and sense but doesn’t always engage the heart. It’s perhaps unsurprising that a director who has such control over the tools of cinema should be able to use it to create one of the greatest horror films of all time. Because what else is horror but the expert use of technique to unsettle and scare the audience? It’s like the genre Kubrick was destined to try – and succeed at.

The Shining was itself partly born out of Kubrick’s disappointment at the reception given to Barry Lyndon, his cinematically rich, but emotionally unengaging (to many) Thackeray adaptation. It garlanded awards, but praise that was more respectful than fulsome – while audiences had largely stayed away. Kubrick may be an artist – but he still wanted people to see his work. He decided to direct a film based on a poplar horror novel – after all people have been seeing slasher and fright pics for decades, so why not get a piece of that action? Stephen King’s novel was one of the few that engaged him (allegedly the famously highbrow Kubrick spent months reading part way into various horror novels before flinging them across his office in contempt). Sure Kubrick – much to King’s annoyance – junked many of the author’s themes in favour of his own. But in doing so he created a terrifying and deeply unsettling experience that stands as his most effective late work.

In the abandoned, and snow isolated, Overlook Hotel during off-season, writer Jack Torrance (Jack Nicholson) is hired as caretaker to keep the building running. Accompanied by his wife Wendy (Shelley Duvall) and young son Danny (Danny Lloyd), Torrance hopes to use the isolation time to come up with a draft of his new novel. However, dark forces are at work at the hotel. Ten years ago the caretaker butchered his whole family there, and the deaths have left a psychic legacy on the building. This is picked up on by the ESP-powered Danny, but also begins to play on the psyche of Jack who slowly begins to become ever more short-tempered, twitchy and unhinged as time goes on.

The Shining is one of the most frightening and unsettling films I’ve ever seen. And I attribute that completely to Kubrick’s mastery of the language of cinema. Every single frame, every single note on the soundtrack, has been perfectly shaped to inspire dread in the heart of the viewer. There are no cheap tricks, no jump scares, no obvious cinematic parlour games. Instead this is Kubrick using his technical artistry. What else can you say when one of the most disturbing things in the film is the changing sound of Danny’s tricycle as he cycles round the hotel (in a single, low angle, tracking shot), going from near silence as he cycles over carpet to bursts of sound as he cycles over wooden floor? When the score overwhelms with discordant sound and high notes as Danny simply stares at a door? 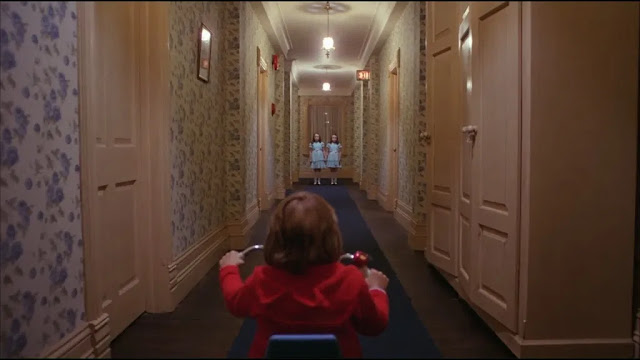 But Kubrick’s genius is everywhere. He understands how the human brain is unsettled by symmetry. Watch the film again and see how so much of it is perfectly framed, how still the camera often is, how images – such as shots of corridors or rooms – are set in such a way to make the image look symmetrical. Something is off in our minds about seeing a building that looks so precise. It transfers as well when the actors are caught in the middle of the frame, with the set either side of them looking identical. Our mind keeps telling us it’s wrong. It feeds into our own doubts and fears. It disturbs us completely. Stillness and quiet mix with bursts of colour. For every elevator door opening to deposit a tidal wave of blood, there is the quiet intimacy of Philip Stone (absolutely chilling) as a ghostly representation of a past janitor, urging Jack to “correct” his wife and child.

That fear of symmetry extends as well to Kubrick’s use of two girl twins as ghosts of the former caretaker’s murdered children (and their stillness and softness of voice is equally terrifying). The ghosts throughout this film that urge Jack on in his murderous rampage are almost uniformly softly spoken, calm and polite – qualities that carry more and more menace. Even when the horrors begin to erupt, Kubrick keeps the camera movement and editing slow, gentle and frequently employs tracking shots (naturally leading to the invention of a new type of Steadicam). Where jump cuts are used they are to give us flashes of Danny’s ESP visions of the hotel (sudden cuts to the murdered girls or other horrors), enough to jolt us and working all the more in the rest of the film’s measured pace and gothic chills.

Kubrick also brilliantly makes use of the psychological impact of isolation. Out in the middle of nowhere, it’s clear time quickly loses meaning. The film is punctured throughout with title cards that seem increasingly random, either naming days (with no indication of how much time has passed between them) or time jumps that seem unconnected with the previous scene. It’s quick to see how much the Torrance’s perception of time has been lost in never-changing surroundings. The impact of constant isolation on a fragile psyche is perhaps something we are even more acutely aware of in 2020, and it’s clear that it has a catastrophic effect on Jack, who becomes ever more susceptible to his bad angels.

Those bad angels are partly where Kubrick begins to deviate from King. Not surprisingly, with Kubrick’s often nihilistic view of humanity, he introduces the idea that Jack has a history of violent temper and even striking Danny. This is very different from King’s idea of a good man and father being bent out of all recognition by the hotel’s evil into a would-be murderer. It’s possibly the main objection King had against the film’s changing of the novel. That and Kubrick’s clear disinterest in “shining” – the name given to the ESP qualities some of the characters display. For Kubrick, what was more important was the unsettling impact environments can have on people’s psyches – amplified in this case by terrifyingly bloodthirsty ghosts. For King the corruption of the good from evil among us was crucial. Both are fascinating ideas – but you can see why the book’s author would not be pleased to see his concepts sidelined.

Part of this may also have stemmed from the casting of Nicholson. Probably the greatest American actor of the 1970s (his hits during that decade are astonishing), this was the first chapter in a new era. Now Nicholson became JACK, part actor but part personality, so larger-than-life that you only had to say his first name for everyone to know who he was. Sure, Nicholson is (like in A Few Good Men) a ticking time bomb, but the performance works. It’s the film where Nicholson embraced for the first time the demonic grin and leer of cruelty he would use so well. But seeing him attack the film’s gothic qualities, while still having a touch of humanity for its quiet moments, works a treat. Could any other actor in the world have pulled off “Here’s Johnny!” and still have us absorbed in the character and the film? It’s pantomime, but brilliance.

More controversial is Shelley Duvall’s weepy, slightly pathetic wife. Much of Duvall’s wetness in the role is surely connected to the reportedly miserable time she had on set. To draw the “right” reactions from her, Kubrick essentially bullied her on set, putting her through hell. Sometimes hundreds of takes were done of even the most trivial scenes to get them right (this film perhaps cemented Kubrick’s reputation for ludicrous perfectionism), a regime that reduced Duvall to a state of near psychological collapse. While this was perfect for her performance, it was hardly conducive to her well-being. And was in itself perhaps another sign of the lack of heart in Kubrick, a director concerned only in the end with effect not emotional truth.

So it’s a black mark against the film. But The Shining is still a masterpiece, perhaps one of Kubrick’s greatest films. The film was so dependent on its technical wizardry, detailed perfection and preciseness that its impact becomes almost unbearable. It focuses on all Kubrick’s strengths and almost none of his weaknesses – indeed his basic dislike of people becomes crucial to its effect rather than running counter to an audience’s need to invest. Tense, unsettling, troubling and in the end deeply scary, while never feeling cheap or exploitative. It’s a landmark in both its genre and its director’s career.