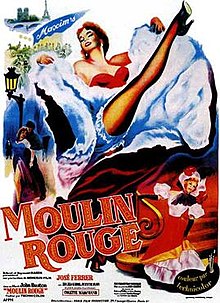 John Huston’s biography of Toulouse-Lautrec is less well known than its exclamation marked name-sake. It would be easy to say there is little in common, beyond the name and setting, between Huston’s film and Luhrmann’s operatic jukebox musical. But that’s to overlook the sprightly and confident shooting that Huston gives many of the scenes in the Moulin Rouge, and the mood of depression and corruption that underlies all the glamour of the club. These are two films very much drinking from the same well – even if the aesthetic and style of both are drastically different.

This artist biography focuses mostly on the last decade of Toulouse-Lautrec’s life. Played by José Ferrer (who also does double duty as the artist’s patrician father), it’s an exploration of the self-loathing and depression that drives the artist and funnels itself into his art. Art which is bold, animated with strikingly unique use of colours and movement. It’s all very different from the more timid, self-conscious crippled artist, the growth of whose legs was arrested after an accident in his childhood. Huston's film front-and-centres Toulouse-Lautrec’s quest for love, but it has enough to say about the rest of its subject’s life.

Similar to his later work on Moby Dick, Huston aimed for a very particular look for his film, inspired by the colours used in the artwork of its subject. Shooting in Technicolour – and much to the objection of that company, who believed all films should showpiece it’s particularly striking bold colours rather than the muted colours Lautrec at times used – he manages to assemble a picture that fills like it completely captures not only the style of the artist, but also captures something of the more grimy and seedy side of the Parisian streets he walked. There is a neat little scene in the middle of the film where Lautrec argues with a printer over mixing his own specialised colours, rather than the more traditional colours he works with. Hard not to see that as a commentary on Huston’s own struggles with Technicolour.

It gives the film though its own very distinctive look, in which Huston uses a number of cinematic approaches that really capture the vibrancy of the Moulin Rouge. The opening scenes, that showcase a flashy can-can dance at the club is shot with an immediacy, with the camera roving in amongst the dancers, throwing us into the atmosphere and excitement of this ground-breaking night club. Alongside which – within the confines of the Hay’s Code – we get a sense of the sexuality of the nightclub, captured in the tempestuous clashes between the dancers and the pettiness and suddenness of feuds that spring up over every subject matter. 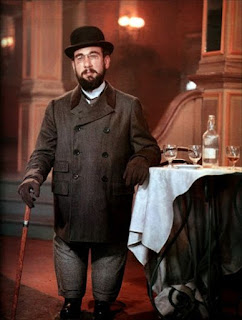 The film doesn’t quite continue all this vibrancy into the rest of its length as it focuses more on Lautrec’s own personal life. José Ferrer, always a distantly patrician actor, is perhaps a little too stilted to really invest us in the emotional pain of a man who didn’t believe he was worth loving. However his commitment to playing the part physically can’t be faulted. To play the diminutive Lautrec, Ferrer wore a contraption that folded his lower legs up behind him (he could only wear it for about 15 minutes before he had to restore the circulation to his legs), wearing this even in scenes he could not be seen full length, so as to get the posture of Lautrec correct. It’s a shame that Ferrer’s slightly reserved manner and precision leaves you feeling like the character is being studied at arms length rather than up-close and personally.

This affects slightly the focus on romance that the film takes – art gets its place, but the style very much looks at these in context of romantic struggles. Lautrec is presented as man convinced of his own ugliness and the barrier of his disability, who could never find a woman who would love him. This drew him, it seems, either towards destructive relationships (in particular with a ‘prostitute’ – not that you would know thanks to the Hays Code – played with an Oscar-nominated richness by Colette Marchand) or to relationships he convinced himself could only be hopeless, platonic obsessions (Suzanne Flon as an art-lover who only the most self-loathing of men couldn’t tell is devoted to Lautrec).

The film interestingly rather misses a sense of fun that you might expect from a nightclub scene. Lautrec is of course miserable for most of his life, self-medicating his physical pain and depression with drink. His parents are either guilty at the accident that crippled him, or frustrated at his choice to spend his life painting the dancers of the Parisian night-life. Huston does get a great sense of the compulsion of the artist – Lautrec is rarely seen not sketching something – and his film is very successful at capturing the loneliness that can accompany art.

If the film does sometimes become a slightly old-fashioned a-to-b story of an artist and his inspiration, it counter-balances this with the flashes of creativity and vibrancy Huston brings to the film. Huston was himself critical of the film in the future, thinking it a missed opportunity – I would suppose due to the general lack of sex in a story set in an environment soaked in it – but working within the limitations he had, it’s a fine piece of work. While you could wish for a slightly more engaging lead performance, it certainly works very effectively to bring its setting and story to life.