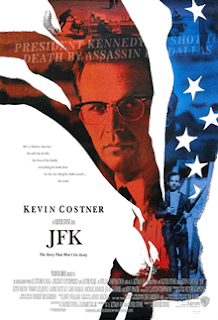 When great events happen, it’s hard for us to accept they might take place for random reasons. Rather than freak occurrences or boring individuals, we’d rather see them taking place due to an impenetrable web of shadowy figures. There is something in us that rejects randomness and embraces order. Conspiracy theories are the (ironic) result of these, with their exponents often the most passionate believers in the all-pervading genius of big government. Events like the death of President Kennedy can’t be because some nobody shot him. Instead it must be part of a wider junta of baddies, with every man you see merely a front for a cabal of the wicked. It’s hard not to be swept up by the lure of the conspiracy theories (they invariably have the best stories after all) – and Oliver Stone’s JFK is perhaps the definitive mainstream conspiracy theory essay.

Taking the campaign of Louisiana DA Jim Garrison (Kevin Costner) to find out the “truth” about the murder of President Kennedy, Stone’s film is part a fascinating presentation of half-truths and “might-have-beens” and part a sprawling mess of irresponsible nonsense. Either way it’s assembled with astonishing panache, a level of filmic skill that makes it (literally) almost impossible to tell whether what you are seeing is true and what is invention. Stone’s film superbly interweaves a variety of film stocks and effects to seamlessly splice together newsreel footage, Zapruder film and his own reconstructions so brilliantly it frequently becomes hard to tell which is which.

The same logic also applies to the script. JFK is frequently engaging and fascinating. But you have to remember that it is the equivalent of meeting the most literate and articulate street corner “End-of-the-Worlder”. Such is Stone’s skill he could, I am sure, have created an equally compelling film which would have you questioning the Moon Landings or the shape of the Earth. JFK throws an army of questions, objections and theories at the screen. And while it rarely provides much in the way of answers, only points that it wants you to think about, these theories frequently fascinate. Imagine JFK as a sort of video essay, linked together with dramatic scenes, with its points delivered by authoritative and trusted actors like Donald Sutherland, Jack Lemmon and Walter Matthau.

There is absolutely no doubting the technique of Stone here, or his mastery of the language of cinema. The work of Robert Richardson’s photography, with its myriad styles, and of Joe Hutshing and Pietro Scalia’s editing, pulling together a host of images, snapshots and flash cuts into an insidiously convincing whole, is breathtaking. Light in particular is superbly used, casting some characters in shadow, flaring up to (literally) blind others - light frequently plays across Garrison's glasses, a visual metaphor for his own struggle to see the light. The speeches he writes for his characters are superbly done, and make their points with great skill – Sutherland (superb) has a hugely convincing story of military black ops action (and inaction) before and after the assassination that fills almost 20 minutes of screentime.

There are compelling arguments made about the ability of Oswald to fire the shots, the triangulation of fire, the spurning of an easier shot before the fateful turn, Oswald’s seemingly illogical movements after the shooting etc. etc. There is decent reasoning behind all of this, and the points are marshalled very well. But, like all extremist theories, suddenly it will turn into something just a little batshit (Lyndon B Johnson ordering the hit or some sort of cabal of Cubans, CIA, FBI and Secret Service working together to conduct a coup).

Much of Stone’s passion for finding the truth (the film’s mantra) is rooted in his own romantic view of Kennedy, as some sort of lost “Prince Who Was Promised”. To Stone, Kennedy would have withdrawn us from Vietnam (news I am sure to the President who started and escalated America’s involvement in it), ended the military industrial complex (contrary to his platform when elected of a stronger US military), bought the Cold War to an end (again, running against his sustained opposition to the Soviet Union) and introduced full Civil Rights (a cause he was lukewarm on at best – unlike his brother or his successor Johnson).

But Kennedy was a romantic figure who had the ability to invite people to invest him with whatever qualities they wanted (both good and bad), a magic cemented forever by his untimely murder. In reality there is no indication that JFK would do (or want to do) any of the things JFK argues he was assassinated for. But that’s all part of the magic of the conspiracy. Facts and events can be marshalled into whatever you want them to be. (Tellingly the only member of Garrison’s investigative team who questions these theories is shown to be a creep in the pay of the conspirators.)

So Kennedy can be a saint, and the film can outline (with no evidence at all beyond a series of coincidences and unlikely or random events) a grand vision of master schemers reshaping America over the body of a dead President. Does it really stand up? Well no of course not. But I will say it is compelling viewing – even if it is essential to keep an open mind about it. Stone later wished he had made clearer that much of the work here was pure fiction (and speculative at best). Certainly it’s a point to keep in mind.

Perhaps Stone should also have looked again at some of the other beats in the film. The film’s version of Jim Garrison as a kind of saintly campaigner for justice flies in the face of many (then and later) who believed the Louisiana DA a shameless self-promoter – an argument made easier to believe by the real Garrison’s cheeky cameo in the film as his ‘nemesis’ Earl Warren. No mention is made in the film that the case he brings against Clay Shaw was dismissed by the jury after less than an hour, and the film avoids explicitly showing his lack of evidence. Costner delivers the final speech, with its famous “back and to the left” commentary on what seems like Kennedy’s unnatural movement after being hit by a bullet and breakdown of the “magic bullet” (both theories now largely discredited), with aplomb, but the film puts a halo on Garrison which doesn’t really stand up.

But again at least it’s entertaining. Other parts of the film don’t even manage that: the baseline narrative that links up the various compelling conspiracy lectures is frequently dull, insipid and lamely written. Sissy Spacek has perhaps the most thankless role in film history as Garrison’s wife whose nearly every line is a variation on “Honey please stop reading the Warren Report and come to bed”. Even that though pales against the exploration of the 1960s gay scene in Louisiana (which Clay Shaw and his “fellow conspirators” were leading members of) which has an unpleasant stink of homophobia, playing into a host of deeply unpleasant (and false) stereotypes of gay people as perverted, promiscuous and preying on the straight. One suspects there was more than a little truth in the idea that Garrison’s fury at Shaw was at least partly motivated by homophobia.

These sequences work considerably less well today – and frequently go on far too long – but when the film focuses on its Kennedy theories it is at least compelling, even if it’s all rubbish. The film made it mainstream to believe Kennedy was killed by a conspiracy in which Oswald was, if he was involved at all, only a patsy. How different would the world have been if Oswald had lived and been made to explain why and how he killed Kennedy? But then chances are, being such an average an unremarkable man, people wouldn’t have believed him anyway.

Stone’s film is a triumph of agenda-led fantasy. Stuffed with faults it makes you at least ask questions – even if you wisely use those questions to affirm many of its points are questionable at best. But any film buff will love the skill it’s told with and the beauty of its technical assembly. Costner was perhaps a little too bland to drive the thing along (although the film uses his innate morality very well), but there are several good performances not least from Gary Oldman who is brilliant as put-upon, used but unknowable Oswald. Nuts, crazy and packed with compelling nonsense, it at least always encourages you to find out more about the actual history.