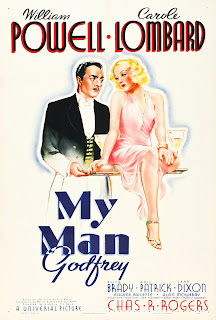 My Man Godfrey is one of the most beloved of all screwball comedies. It’s also the only film in history to be nominated in every acting category and the directing and writing categories at the Oscars and still not get nominated for Best Picture (proving comedy was devalued even then). Today it still carries a heck of a comedic wallop, splicing this in with an ever more acute and profound social commentary. It’s a gem of Golden Era Hollywood.

With New York in the midst of the Great Depression, affluent socialites the Bullock sisters – snob Cornelia (Gail Patrick) and ditzy, scatter-brained Irene (Carole Lombard) – are in hunt for a “forgotten man” so they can claim victory in their scavenger hunt. In a rubbish dump – turned home for the unemployed – they find the well-spoken Godfrey (William Powell). Godfrey is having none of the condescension of Cornelia, but finds the honesty and kindness of Irene more touching agrees to help her win the prize – whereupon he promptly admonishes the upper-class crowd at the Waldorf for their lack of concern for the working man. Ashamed, Irene offers him the job of Bullock family butler, which Godfrey accepts. But as he navigates the eccentric family, is Godfrey also hiding secrets of his own, secrets that suggest he is much more than he seems?

My Man Godfrey is a very funny film, centre-piecing the fast-paced comedic delivery of the era, the script never going more than a minute without a killer line or brilliant piece of comedic business. It’s helped as well by the casting, with every actor being perfectly selected for their roles, and each of them bringing their absolute A-game. Not least the partnership of Powell and Lombard – divorced in real life but still close – who spark off each other wonderfully and keep the will-they-won’t-they question beautifully balanced throughout the whole film.

La Cava’s film – wonderfully directed with imagination and visual chutzpah – matches this up with an extremely neat, but not too preachy, line in social commentary. The self-obsessions and petty concerns of the Bullock family are frequently contrasted with the poverty and struggles of the working man, while the families’ lack of concern for the struggles of the vagrants and down-and-outs only a taxi ride away from their mansion home is striking. Godfrey frequently points up this lack of empathy in this ‘classless’ country (which is in fact defined by class), stressing he found more decency and kindness at the rubbish dump than he did in the palaces of the mighty.

Sure Godfrey’s secret may well be that he is from loaded stock himself – but has given it all up in shame and self-disgust – but that only makes him all the better an observer of the whims of the rich treading on the poor. In fact My Man Godfrey could well be the film for today. The scavenger hunt dinner – a brilliantly directed, frenetic scene that looks years ahead of its time in its technical accomplishment – really captures this. The guests haw and shout over each other, clutching with an ironic glee their examples of poverty (from everyday objects to a goat to, of course. the ‘forgotten’ man, who has as much value as the goat to them). We get more of it at the posh clubs and cocktail parties the Bullock frequent, the guests (while not cruel) being as blasé and oblivious of their fortune as they are of the suffering in the rest of the city.

But that makes this sound like a civics lessons, whereas the film is first-and-foremost a comedy. It has a terrific performance from William Powell as Godfrey. Powell makes the part a mix of Jeeves and Wooster: the intelligence and calm of Jeeves with the warmth and tendency for scrapes of Wooster. Powell is brilliant at balancing the wry observer quality of Godfrey, while never sacrificing his warmer, generous soul. And also brilliantly suggests his wonderful judgement of situations and characters, without ever making him smug or a know-it-all. It’s a quite exquisite performance of unflappility covering emotional depth.

Lombard sparks off him very well as Irene, allowed to frequently head further over the top as Powell grounds Godfrey in normality (Lombard was a famously electric performer, and the outtakes reel for the film frequently show her screwing up her fast-paced dialogue with copious swear-words). Today the more ditzy Irene sometimes comes across as a more tiresome, less believable character – she is so obviously a narrative construction rather than someone who could be real that it becomes harder to connect with her (or to imagine Godfrey might find her attractive). But Lombard’s energy and drive carries the film through and the film highlights her electric qualities in several show-stopping scenes.

The entire Bullock household is in fact spot in, with gorgeous performances. Alice Brady (Oscar-nominated) is the quintessential disapproving society mother, archly self-obsessed. Eugene Pallette is wonderfully funny as the exasperated father of the household, barely able to understand either his family or his investments. Gail Patrick is a delight as Irene’s manipulative sister, proud and selfish. Mischa Auer (Oscar nominated surely off the bag of his extraordinary gorilla impersonation) is very funny as Angelica’s “protégé”, a preening, talent-free musician and freeloader who spends most of his scenes eating. Jean Dixon is smart and sassy as the maid Molly. There isn’t a bum note in this ensemble.

La Cava directs all this with great skill, framing the action with a beautiful sense of composition, pace and style. You know you are in save hands with the opening scene that show the credits appearing like neon bill boards during a slow, continuous tracking shot along the New York riverside. With dialogue that glides beautifully from humour to pathos, and delivery that creates comic archetypes that feel like real people, it’s a film that gets nearly everything right – which is why it’s still a classic today.
Email ThisBlogThis!Share to TwitterShare to FacebookShare to Pinterest
Labels: Alan Mowbray, Alice Brady, Carole Lombard, Eugene Pallette, Gail Patrick, Gregory La Cava, Jean Dixon, Mischa Auer, Screwball comedy, Social issues, William Powell