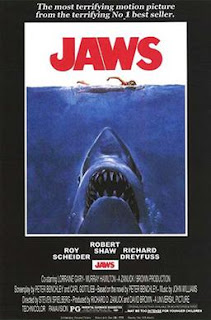 Necessity can be the mother of invention. Perhaps no film demonstrates this better than Spielberg’s sensational smash-hit Jaws. If “Bruce” the animatronic shark had not been so unreliable and unconvincing would the film have become such a big hit? If Spielberg had been able to show a convincing shark, would he have dropped the suggestiveness and unseen terror – not to mention the famous creeping dread of John Williams’ score – and gone for more traditional scares? We just don’t know – but he was certainly forced to be as inventive as possible and it worked a treat.

A quiet community on Amity Island suddenly finds itself falling victim to a terrifying series of attacks from a shark. As people panic – and the death toll rises – only local police chief Martin Brody (Roy Scheider) seems to want to close the beaches and declare an emergency (after all we can’t let the simple matter of a few kids ripped to shreds by the finned killer disrupt the holiday season). But when things eventually go too far on the first day of holiday season, Brody finally gets the go ahead to head to sea and take on the shark himself. Only problem is Brody has a fear of water and no idea how to hunt a shark. Just as well he’s teaming up with Marine Biologist Martin Hooper (Richard Dreyfuss) and grizzled old sea-dog and shark hunter Quint (Robert Shaw) for the mission. Though with this size of this sucker, they may need a bigger boat…

Spielberg’s film largely works so damn well because it pushes suggestion over what we actually see. The shark doesn’t appear on screen for well over an hour. Instead, we see only movement of the water, POV shots of the shark and the flailing terror of the victims, dragged hither and yon by the unseen opponent. Spielberg very generously – and perhaps accurately – attributed at least half of the film’s success to John William’s iconic score. The seemingly simple, but devilishly intoxicating music perfectly captures feelings of mounting dread and tension. It’s possibly the most instantly recognisable score in film history, and works an absolute treat to get across the terror.

Because that is what the film is all about. There is a reason why the tag line for the first sequel was “Just when you thought it was safe to go back into the water”. The film plays on the creeping concern with not knowing what is underneath the still surface of the waters. And the possibility that a monster lurks there ready to destroy us, taps into all those fundamental child-like terrors we have of monsters under the bed. The things we can’t see are terrifying. Spielberg taps into this brilliantly, with the frothing of water or the shark’s movement being substituted by other things – either a part of a pier being dragged in its wake, or the barrels that Quint attaches to it with harpoons to track its movement. A large part of the second half of the film revolves around Quint’s ship being chased by floating barrels – and it works never-the-less.

This sense of terror that the film captures so well – as well as the moments of shock of carefully chosen few beats of gore – is a surprise when you consider that Spielberg today is seen as a more sentimental, family-friendly director. But on this film, he was a young buck still out of the gate – this was only his second theatrical film. Spielberg wasn’t even first choice – although his TV movie Duel, which sees a driver chased by a giant truck, the driver of which remains unseen, was the perfect calling card. When he got on board, he made what he himself describes as a series of rookie mistakes, not least insisting on shooting at sea rather than in a tank or just off the coast. Not to mention the multiple delays from the shark. Despite the film’s nomination for Best Picture (and the millions it earned at the box office), Spielberg was denied an Oscar nod as suspicions abounded that the oft-delayed, over-budget film was “saved” in the editing suite.

While the film is superbly edited – again that creeping power of suggestion and the way the film leaves much to the viewer’s imagination – it’s much easier now to accept Jaws was Spielberg’s first real flexing of his cinematic muscle. The decision to film at sea – while causing no end of problems for the crew – brilliantly allows for wide shot vistas that creates a real sense of isolation for the boat. It constantly looks small, rattled and fragile in a massive environment, making it feel like even more of a mismatch against the size of the shark. Throw in Spielberg’s brilliance at building tension, and you get a film that seizes you by the scruff of the neck and doesn’t let go. He’s a master here and the film has more than enough famous shots – including the famous reverse zoom on Scheider as he realises the shark is in the water – to show he was just warming up.

It also helps that the film front-and-centres character and good writing alongside all the thrills. Part of the benefit of the films continued delays is that the original script was constantly tinkered and improved by Carl Gottleib from Benchley’s original. Others were bought in to work on it – most famously John Milius who took a redraft pass at Quint’s famous Indianapolis speech, which Robert Shaw himself then rewrote. What we end up with is a script with three well-drawn – and distinctively different but complementary – characters and plenty of sharp lines.

The three stars fill these roles with aplomb. Scheider gracefully accepts the quieter role, but carries the film with an unshowy ease as an everyday hero, eventually pushed to his limits. Dreyfuss gets the more plucky, overtly comic role as the expert biologist and plucky young gun, with a sharp wit and a chippy younger man’s perspective. Shaw meanwhile gets some of the films best scenes as a grizzled seadog with no time for the kids and a dangerous obsession for proving he’s right. The three actors play off each other extremely well, despite the troubles on set (which Shaw was usually at the heart of, from his drinking, to his clashes with Dreyfuss, to his constant flying back to Canada at any opportunity for tax reasons).

But these three actors work brilliantly together, and the film’s tense brilliance still makes it a compelling watch today. And yes, Spielberg was right – that Williams score does play a huge part in its success. Try imagining what you are seeing in the film without the score playing over it? Necessity is the mother of invention.
Email ThisBlogThis!Share to TwitterShare to FacebookShare to Pinterest
Labels: Carl Gottlieb, Horror film, Lorraine Gray, Murray Hamilton, Richard Dreyfuss, Robert Shaw, Roy Scheider, Steven Spielberg, Thriller