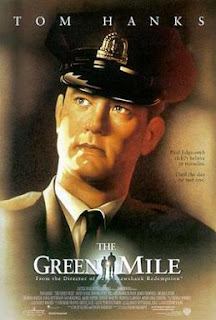 Stephen King’s novels are often thought of solely as horror novels – but that’s to forget that he also carries with him a profound sense of the human condition and a sharp ability to create moving and surprising human stories. That’s why his works can inspire films as diverse as The Shining and The Shawshank Redemption. The Green Mile, the second King novel bought to the screen by Frank Darabont, definitely falls into the latter camp – probably why it has continued to be met with warmth and regard decades after its making.

In present day Louisiana, Paul Edgecomb (Tom Hanks – played as an old man by Dabs Greer after Hanks’ make-up tests proved unconvincing) recounts his days in 1935, working as a prison guard on “the Green Mile”, the death row section of a prison. Paul’s life was changed forever with the arrival of a gentle giant, John Coffey (Michael Clarke Duncan), a seemingly simple-minded man found guilty of raping and murdering two young girls. However, John doesn’t match the personality Paul expects of a hardened criminal – and events soon prove he is far more than just an ordinary prisoner…

Frank Darabont’s adaptation of King’s novel – an adaptation King still lists as his favourite adaptation of his work – is long at almost three hours, and frequently takes its time. But it does so too carefully, and in detail, build the world it sits in – namely the prison – and the characters who live in it. Everything is carefully paced in order to create the sense of a real world, with (most of its) characters defying easy conventions or definitions.

We know of course that the guards on this cell are largely decent, hard-working and respectful of the prisoners – not least because they are led by Tom Hanks at his most everyday, grounded and quietly moral. Darabont is very good at letting the world breathe – and, as a skilled scriptwriter, also in sketching character quickly and clearly. Both guards and prisoners are fully crafted characters, and while some of them do verge a bit more on the cartoonish villainy, their motivations and feelings feel real.

You could criticise the film for the sentimental views built into this. All the guards are basically decent men – apart from Doug Hutchinson’s cowardly, whining bully Percy Whetmore, who owes his job to his family background, picks on the prisoners, reads porn and is motivated only by wanting to “see one cook”. While the film tries to give him some depth, a weakness of character, he’s basically easy for us to dislike. Similarly among the prisoners, all of them are polite, calm and resigned to the justice of their fate – minus an appalling, virulent racist hill-billy (played by Sam Rockwell with a manic intensity). There are very little doubts about who we are supposed to be rooting for here.

Racism as a whole gets only the barest of mentions. A few slurs are thrown at African-American John Coffey, but no real mention that in 1930s Louisiana there was little chance of a black man getting any form of justice at trial. Typically the only characters to espouse racist views fall squarely into the villain’s camp. Perhaps the intent is to show the prison as a melting pot of sorts – the final stop-off for people’s lives, where all men are basically equal, and the guards taking to heart their role as custodians for their final moments. But it’s also a bit of a cop-out.

We’re shown in detail the work Edgecomb and his team put into ensuring the prison is run smoothly and justly, and that the executions are committed as humanely as possible (frequent rehearsals – with Harry Dean Stanton rather funny as an eccentric stand-in condemned man – are called for). The good guards and good prisoners form bonds – and while this adds to the sentimentality, it perhaps makes sense in a system where the most extreme price is to be paid for their acts, and that any other judgement is unnecessary. We see three executions throughout the film, each carrying its own tone: one is a “how-it-should-be-done”, one is a horrifying, tortuous disaster, with Percy sabotaging the humane elements out of spite, the third sees Edgecomb finally questioning the role he has chosen for his life.

It’s not a film that touches a great deal on the morality – or otherwise – of legal executions, but it does use the setting to explore questions of faith and spirituality. Because what is going to put such things into your mind quicker than working in a place where life and death is literally your business? Some of this is more heavy handed than others – John Coffey’s initials should be a bit of a give-away – but the film does ask questions of what is important to us as people, and at what points should we question the decisions we take about how we live our lives.

These questions of faith don’t quite coalesce into something truly coherent, as it never quite feels if the film wants to deal with the implications of John Coffey’s gifts of healing. The possibilities of a wider world outside our understanding never really come together, and instead Coffey’s gift of healing by touch seems to be a blessed skill that he has developed rather than something more profound. There is also something troubling about the film’s sole black character (in 1930a segregated Louisiana of all places) serving the purpose to heal white people and be sacrificed.

But when the film focuses on story and character rather than its rather unclear themes, it does well. Hanks is very good in the lead role – Darabont wrote the film specifically for him – with solid support from Morse, Pepper and DeMunn as the main “good” guard characters. Michael Jeter gives some heartfelt work as eccentric prisoner Delacroix. But the stand-out – in every way – is Michael Clarke Duncan, whose John Coffey is sweet, naïve, polite, gentle but also carries a suggestion of pain and guilt beneath his surface which is expertly sketched out.

The Green Mile may be overlong, but it’s hard to work out what you would cut as it’s a film that relies so strongly on mood, atmosphere and careful world creation. Well scripted and confidently directed by Darabont, it may be hard to work out exactly what it wants to say – but it has a richness and confidence to it, as well as an emotional force, that sometimes makes you feel that doesn’t really matter.
Email ThisBlogThis!Share to TwitterShare to FacebookShare to Pinterest
Labels: Barry Pepper, Bonnie Hunt, David Morse, Frank Darabont, Graham Greene, Harry Dean Stanton, James Cromwell, Jeffrey DeMunn, Michael Clarke Duncan, Michael Jeter, Patricia Clarkson, Prison drama, Sam Rockwell