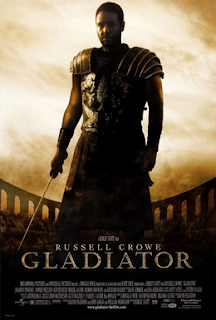 When Gladiator hit the big-screen the swords-and-sandals epic genre was dead. A relic of the early days of technicolour Hollywood, where the widest possible screens were designed to tempt audiences away from the television and into the movie theatre, Roman epics were often seen as stodgy things, usually carrying heavy-handed Christian themes while gleefully throwing as much of the decadence of the empire on the screen as possible. Gladiator changed all that, bringing an emotional and psychological complexity to the genre, as well as a rollicking good story and some brilliant film-making. An Oscar for Best Picture confirmed the genre was back.

In 180 AD General Maximus Decimus Meridius (Russell Crowe) commands the final battle of the Roman forces to conquer the German tribes and bring them under the control of the Emperor Marcus Aurelius (Richard Harris). The humble, dutiful and principled Maximus is a natural leader and the son Marcus Aurelius wishes he had, rather than the son he has the insecure and ambitious Commodus (Joaquin Phoenix). When the Emperor decides that Maximus not Commodus will succeed him – with the brief to restore the Roman republic – Commodus murders the Emperor. When Maximus refuses to give Commodus his loyalty, the new Emperor sentences him and his family to death. Maximus escapes, although he is badly injured, but arrives too late at his home to save his wife and son from death. Collapsing, the General is taken by slavers, healed by fellow slave Juba (Djimon Hounsou) and sold to the North African Gladiator school of Proximo (Oliver Reed). Maximus will play the Gladiator game – because he longs to have his revenge on Commodus.

Gladiator is superbly directed by Ridley Scott, who perfectly mixes the epic scale of the drama with the intimate, human story at its heart. The film looks absolutely fantastic from start to finish, with the superb visuals backed by a breathtakingly beautiful score by Hans Zimmer and Lisa Gerrard that skilfully uses refrains and themes to instantly identify the core emotions in the audiences mind. These themes are associated with emotional beats that immediately plug us into the interior thoughts and emotions of the characters.

It works because of the emotional truth at its heart. Basically it’s a love story between a man and his dead wife, and isn’t afraid to explore the depths of love that we feel for those closest to us and our pain of their loss. Maximus’ wife and child are represented in silent flashbacks and by two small icons Maximus carries with him on campaign. When, late in the film, he is reunited with these items his raw, tearfully quiet joy carry as much force as any real reunion would do. What drives the film is less a drive for revenge – although there is no doubt this is a motivator for Maximus – but of a continued sense that he must fulfil all his duties (in this case restore the Republic as his surrogate father wished) before he can return to his wife and son (i.e. die). 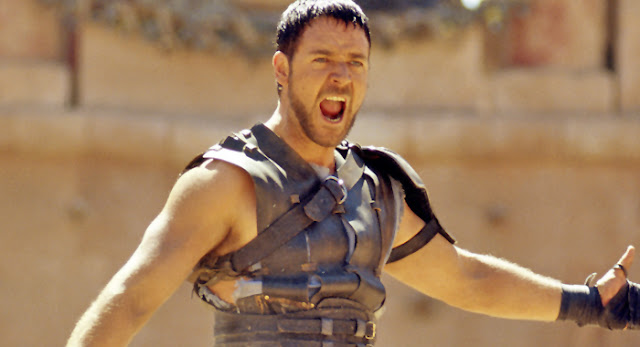 It’s that which makes the film so easy to invest in emotionally, and which makes Maximus (a hardened killer) so easy to relate to. If he was just a raging man out for revenge, the film would carry a leaner harsher look. But he is instead a man motivated by love, who yearns to be with his family again. Mortality hangs over the entire film – the first shot of the film, famously of the hands in the wheat, have buried themselves in the consciousness because we can all relate to a man who longs to lay down his labours and be with the people he loves. Christianity doesn’t appear too much in Gladiator (unlike older Hollywood Roman epics) but faith is there in spades. And Maximus will do nothing that will jeopardise a reunion with his family in heaven.

This deeply involving story of a man who remains faithful to the memory of his wife – and Scott wisely removed any love plot with Lucilla, which would have felt like cheating so strongly does the film build Maximus’ love for his wife – that audiences are happy to go with the film through all the violence that follows. Gladiator hit the sweetspot of having something for everyone, from emotion to action. And the action is brilliant. The opening battles is hugely impressive, from its scale to the imaginative interpretation of Roman tactics. It’s trumped by the more raw and ragged action that comes in the Gladiatorial ring, as Maximus transfers his brutal efficiency at war into the ring for the amusement of the crowd.

Like all Gladiator films and series the film successfully has its cake and eats it – so we get a sense of the horror of people fighting to the death for our entertainment, while also heartily enjoying watching our heroes kick ass. The sequence that uses this most effectively, as Proximo’s outmatched Gladiators follow Maximus’ strategic experience and military training to defeat a group of deadly chariot fighters, would-be a stand out in any movie.

The film further works due to the assured brilliance of the Oscar-winning Russell Crowe in the lead role. Crowe exudes natural authority as a general – he genuinely feels like the sort of man that first his soldiers and then his fellow Gladiators will follow to the bitter end. Crowe also dives deep into the soulful sadness at the heart of Maximus, the romantic longing and the searing pain of the betrayal and murder of his family. It’s a performance of immense, small-scale intimacy that also never once gets over-shadowed by the huge spectacle around him. I’m not sure many other actors could have pulled it off. 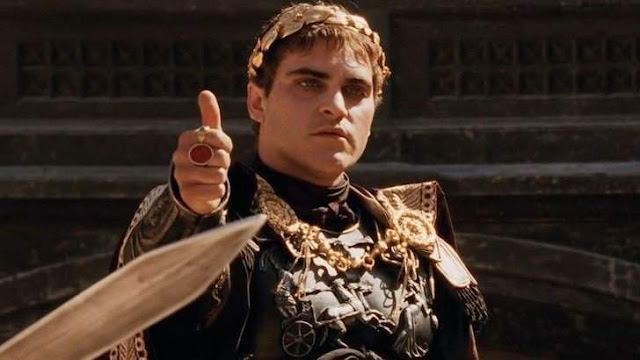 But the whole cast is extremely strong, Scott encouraging great work across the board. Joaquin Phoenix in particular takes the villain role to a bravely unusual place. His Commodus, far from a sneering Caligula, is in fact a weak, anxious, jealous even strangely pitiable man, so insecure and riven with envy for others that he becomes twisted by it. But we never lose a sense of the humanity at his heart, the sense of a little boy lost, scared by the world around him. It makes sense the Connie Nielsen’s Lucilla – walking a difficult line as a character who has to play both sides – could both fear and hate him but still love the fragile little brother she still senses in him.

Scott’s trusting of experienced pros – many you feel hungry for an opportunity like this – is clear throughout the whole cast. Richard Harris was pulled out of a career slump and reinvented here as an elder statesman, with a wry, playful and eventually moving performance as Marcus Aurelius. Scott’s biggest risk was pulling Oliver Reed from a life better known for drinking bouts to play Proximo. Playing his best role for almost thirty years, Reed reminded us all for one last time that as well as a chat-show joke he was also a powerful and dominant performer, his Proximo a snarling scene stealer. Reed’s death – his final scenes completed with special effects – made this a better tribute than he could have ever imagined.

There are few feet placed wrong in Gladiator. As an action spectacular it’s faultless, but this works because of the truth and love at its heart. It creates an epic that is emotionally involving as it is exciting to watch. The reconstruction of Rome is hugely impressive and Scott paces the film perfectly, letting its force grow along. You never once feel thrown by its scope, and so completely does it wrap you up that, as it becomes more operatic in the final act, the film is never at risk of losing you. It deserves to be remembered with the best of the Hollywood epics.
Email ThisBlogThis!Share to TwitterShare to FacebookShare to Pinterest
Labels: Best Picture, Connie Nielsen, David Hemmings, Derek Jacobi, Djimon Hounsou, Historical epics, Joaquin Phoenix, Oliver Reed, Richard Harris, Ridley Scott, Roman films, Russell Crowe