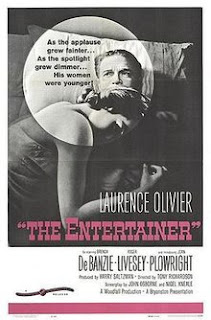 In the late 1950s Laurence Olivier was worried about his career. While he was still doing Shakespeare and Coward comedies (intermixed with the odd film), the world of acting and theatre was moving on. Not least as John Osborne’s Look Back in Anger was taking the West End by storm. Olivier seemed the polar opposite of the “Angry Young Men” of British theatre, a dusty relic. So Olivier changed gears – and his entire life – by asking to be cast in the lead role of Osborne’s next play The Entertainer. Olivier’s sensational stage performance – captured here on film – radically changed the path of both his career and his life, with his long-troubled marriage to Vivien Leigh broking down during it. But he also cemented himself as the leading British actor.

Olivier plays Archie Rice, a failing never-has-been end-of-pier comedy performer at an unnamed Seaside town in 1956. Rice’s routines are old-and-tired, his comedy tinged with desperation and he’s all but broke. Archie’s audiences are tired, bored and unamused. His home life, with his faded former beauty champ wife (Brenda de Banzie) is on the ropes due to his constant infidelity. His father (Roger Livesey) – a music hall celebrity with real talent – loves him but thinks he’s a disasater waiting to happen. His son Frank (Alan Bates) adores him but his daughter Jean (Joan Plowright) is more realistic. Archie through continues to peddle the idea of a success being round the corner, trying to put together a hit revue starring his latest mistress (Shirley Anne Field) and funded by her parents. Things will not end well.

The Entertainer’s main claim to historical note is that it captures that sensational stage performance of Laurence Olivier in the lead role. Olivier had always liked to claim that, with a few zigs and zags in his career, he would have become a third-rate comedian. His performance – with its ingratiating patter, it’s seedy sexually ambivalent campness, his selfishness and self-obsession and greed – is brilliant. Archie’s entire life is a desperate struggle to get himself the career he wants – while trying to shut his eyes to his own lack of talent (of which he is painfully aware). Olivier captures superbly not only the front of a man bent on self-promotion, but also the dead-eyed horror of a man who is aware all the time that he is dying inside.

Olivier’s eyes are drill-holes of death, and his life is an exhibition of selfish patter, with a constant sense of performance in every inch of Archie’s life. He’s a run-down, finished and disillusioned man trying to pluck what few moments of pleasure he can from a life he is only going through the motions in. All of it covered with a coating of self-delusion that quickly crumbles into sweaty desperation. While the film can only give a taste of the Olivier stage performance, it re-enforces Olivier’s energy, creativity and bravery. Olivier’s both bravura and tragically tired music hall performances alone are worth the price of admission.

Away from Olivier’s exceptional capturing of the washed up patter of the sleazy loser, it’s easy to overlook most of the rest of the film. But it’s directed with a kitchen-sink freshness by Tony Richardson, who brilliantly captures the faded grandeur and grubby failure of a failing seaside resort. Osborne’s play used the decline of music hall as a metaphor for the decline of the British Empire and while the film (for all its Suez references) doesn’t quite convey this, favouring instead domestic tragedy, it still perfectly captures the crumbling world of Rice and his ilk. Rice’s father – Roger Livesey, excellent and about a year older than Olivier – is a relic of the success of this era, and still carries some of its glamour, but still lives as a virtual tenant in the Rice home, eating spare cake where he can.

While the film is dominated by Olivier, this presentation of the play as a domestic tragedy works rather well. Brenda de Banzie (also reprising her role from stage) is very good as an ex-glamour puss (and former mistress of Archie) now turned into a faded, depressed matron, drunkenly bitter about what her life has (not) led to. Joan Plowright is excellent as the knowing daughter, alternately sympathetic and appalled at her father. Shirley Anne Field’s naïve lover is suitably naïve, under the control of her battleaxe mother, well played by Thora Hird. The cast is rounded out with Alan Bates and Albert Finney (both in debuts) as Archie’s sons.

While the film feels a little overlong at times, and is perhaps too much in thrall to Olivier, it offers a neat kitchen-sink view of failure and corruption in British life of the 1950s. There is, of course, no hope and no second chances here. Only the long, wearying decline and rotting as Archie’s life disintegrates under pressure and his own incompetent self-delusion.
Email ThisBlogThis!Share to TwitterShare to FacebookShare to Pinterest
Labels: Alan Bates, Albert Finney, Brenda de Banzie, British Films, Daniel Massey, Joan Plowright, Kitchen sink drama, Laurence Olivier, Roger Livesey, Shirley Anne Field, Thora Hird, Tony Richardson