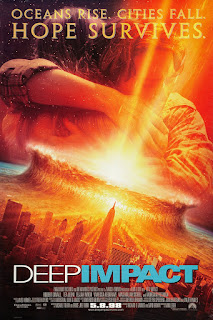 Sometimes two Hollywood studies have the same ideas at the same time. When this happened in 1974 they clubbed together and turned two scripts about burning skyscrapers into one movie – The Towering Inferno. But it’s more likely they’ll do what happened with volcano movies in 1997, White House invasion movies in 2013 and asteroids movies in 1998: both make a film and rush to be the first one out. Usually that’s the winner (ask Dante’s Peak or Olympus Has Fallen). The exception was Deep Impact which made plenty of moolah – but was trumped by Michael Bay’s thundering Armageddon, with its far more straight-forward feel-good action.

A meteor is heading towards the Earth – and it’s an Extinction Level Event (ELE) that will wipe out all life on Earth. World governments keep it hushed up, wanting to avoid mass panic, and start planning to preserve mankind. Underground “arks” will be built in major countries to protect a small number of population. And a manned space mission, crewed by a team of young bucks and veteran astronaut Spurgeon “Fish” Tanner (Robert Duvall), will head out to the asteroid to try and use a nuclear bomb to blow it up. However news leaks when intrepid young MSNBC reporter Jenny Lerner (Téa Leoni) stumbles on news of a cabinet resignation, over a mysterious “Ellie”, leading to her accidentally uncovering the meteor. President Tom Beck (Morgan Freeman) announces all to the world – and mankind prepares, in hope, for the disaster.

Deep Impact is a well-mounted and surprisingly thoughtful adventure story, that tries to deal with its Earth-ending themes with a seriousness and humanity that’s a world away from the flag-waving crash-bangs of Armageddon. Well directed by Mimi Leder, who juggles effectively huge special effects and low-key personal stories (even if these have the air of movie-of-the-week to them), it’s an ensemble piece with a surprisingly downer ending (no surprise from the poster) that still leaves more than a touch of hope that mankind will persevere. 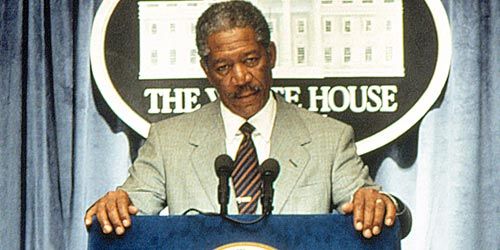 It’s poe-faced seriousness about reflecting on the end of the world may be dwarfed now by superior TV shows – it’s hardly The Leftovers – but felt quite daring for a 90s blockbuster, at least trying to be some sort of meditation on the end of the world. While the film does do this by focusing on the most mundane of soapy dramas – will Jenny Lind (Téa Leoni in a truly thankless role) manage to reconcile with her estranged father (Maximilian Schell, a bizarre choice but who manages to rein in most of the ham) who walked out on her and her mother (Vanessa Redgrave, if possible an even more surreal choice) before the world ends – at least it’s sort of trying.

Soap also soaks through the storyline about young Leo Biedermann (Elijah Wood), the geeky wünderkid who discovers the asteroid. The drama around a national lottery to select the chosen (very) few who will join the 200,000 essential scientists, artists and politicians in the bunker is boiled down to whether Leo will be able to sneak his girlfriend (Leelee Sobieski) and her family on the list. Needless to say, this plotline boils down into a desperate chase, some heroic sacrifices and a great deal of tears. This sort of stuff doesn’t re-invent the wheel, but it makes for familiar cinema tropes among the general “end-of-the-world” seriousness. 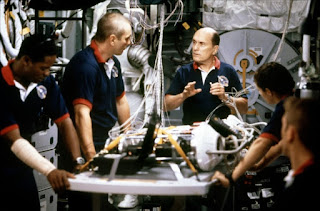 There isn’t much in the way of humour in Deep Impact, perhaps because those making it were worried cracking a joke might undermine the drama. There’s nothing wrong with this, but you start to notice more the film’s “not just another blockbuster” mindset being warn very firmly on its sleeve. The film’s third major plotline, around the mission to blow up the asteroid, is as much about whether grizzled, wise vet Robert Duvall will win the respect of the dismissive young bucks he’s crewed with (spoilers he does) as it is whether they will destroy the meteor. Anyone who can’t see sacrifices coming here btw, hasn’t seen enough films – but these moments when they come carry a fair emotional wallop, partly because the film never puts its tongue in its cheek.

It’s a film proud of its scientific realism, which makes it slightly easy to snigger at the sillier moments – especially when it takes itself so seriously. An astronomer (played by The Untouchables luckless Charles Martin Smith) drives to his death racing to warn the authorities (why not just call them from his office eh?). The astronauts, for all their vaulted training, hit the meteor surface with all the blasé casualness of high-school jocks. Jenny’s journalistic investigation is so clumsy and inept, it’s hilarious watching the President and others assume she’s way more clued up than she is (this also comes from a time when Jenny could key in “E.L.E.” into the Internet and get one result – I just tried it and got 619 million. Simpler times).

I’ve been hard on this film, but honestly it’s still a very easy film to like. Sure it’s really silly and soapy but it takes itself seriously and it wants to tell a story about people and human relationship problems, rather than effects, which is praiseworthy in itself. The best moments go to the experienced old pros, with Duvall rather good as Tanner and Morgan Freeman wonderfully authoritative as the President (it was considered daring at the time to have a Black President). The special effects when the meteor arrives (spoiled on the poster and the trailer) are impressive and while it’s easy to tease, you’ll still welcome it every time it arrives on your TV screen.
Email ThisBlogThis!Share to TwitterShare to FacebookShare to Pinterest
Labels: Disaster Films, Elijah Wood, James Cromwell, Jon Favreau, Laura Innes, Mary McCormack, Maximilian Schell, Mimi Leder, Morgan Freeman, Richard Schiff, Robert Duvall, Rod Eldard, Téa Leoni, Vanessa Redgrave