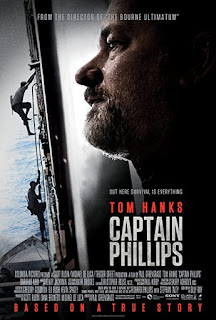 The best of Paul Greengrass’ directorial work brings documentary realism to compelling real-life events, laced with tragedy. He’s made extraordinary films about Bloody Sunday and 9/11 and bought his unique style to Jason Bourne and the Green Zone of Iraq. Captain Phillips continues this, bringing to life the true story of the hijacking of the container ship Maersk Alabama and the kidnapping of its captain Richard Phillips. And this is a brilliantly tense and dynamic film which seizes the viewer in a vice-like grip and never once lets up for a moment of its runtime.

Tom Hanks plays Richard Phillips, dedicated and professional merchant captain, whose ship is eventually seized by four Somali pirates, led by Abduwali Muse (newcomer Barkhad Abdi, who landed BAFTA and  Oscar nominations for this work here). Phillips is determined to protect the crew (who are hidden around the ship), while the pirates are desperate for a life-changing score that could free them from lives of crushing poverty in Somalia. With such high stakes to play for, Phillips and Muse find themselves engaged in a battle of wills and wits – but with only one of them armed with a gun.

Greengrass’ film is almost unbelievably tense. From the first appearance of Muse’s skiff off the Maersk Alabama to the film’s end, Greengrass manages to keep the audience on a knife edge for over two hours – this despite it being based on a true story where we know the hero will come out in one piece. Shot in the typical Greengrass style, with an at-times jittery handheld camera – brilliantly shot by Barry Ackroyd, a master of this style – this is an immersive drama to an extreme degree. You really do feel part of the action, with the immediacy of the shooting infecting the entire viewing experience.

This is powered further by Greengrass’s superb work with actors – and he draws some marvellous performances here. Tom Hanks – inexplicably not nominated for an Oscar – gives a near career best performance as Phillips. Hanks’ natural skill at playing regular, relatable guys in impossible situations is perfect for Phillips, but he mixes it here first a slightly stern authoritative distance Phillips has with the crew and a deep sense of duty. On top of which, thrown into an impossible situation Hanks has Phillips walking a tight-rope of being seen to co-operate with the hijackers, while trying to work against them, while simultaneously becoming increasingly frayed around the edges. The final sequences alone – of a shocked and emotionally exhausted Phillips – were deserving of the highest honours, raw and honest work from Hanks who confirms he is a great actor.

To go toe-to-toe in scenes with Hanks would be a challenge for most actors – imagine how difficult it must be for a first time performer. Chosen from thousands of applicants, Barkhard Abdi is superb as Muse. Confident, determined but quietly, unspokenly, out of his depth, Muse is determined not to be taken for a ride, but also desperately improvising – a man who feels he doesn’t have choices in his own life, so must cling to an opportunity no matter how remote it becomes, until the bitter end. Abdi is fierce and strong – “Look me in the eye – I’m the captain now!” he firmly tells Phillips – but as the film progresses, it’s clear his control over the other pirates is loose and, smart as Abdi is, he’s also naïve in how much power he holds against the might of the US military sent to free Phillips.

Greengrass’ film skilfully adds enough beats of the poverty and desperation of Somalia to avoid these pirates ever becoming just faceless heavies and thieves. The group are introduced in a poverty-stricken fishing village, Muse choosing from dozens of desperate volunteers to man his crew. Muse stresses to Phillips that while there may be more choices than fisherman and pirate, in Somalia there aren’t – and that international shipping lines have disrupted the traditional fishing areas around the Somali coast. These are desperate and determined men –not blindly evil – and they need a massive score – the $30k they’re offered from the ship’s safe isn’t going to cut it.

The film brings this intensity into play for every action of the pirates. Early on, the smallness and decrepitude of Muse’s skiff is compared frequently with the height and vastness of the Maersk Alabama, with the pirates’ daring and dangerous boarding of the ship as tensely involving as the ship’s crew’s struggle to evade them and protect their own lives.
The wide open vastness and hide-and-seek of the Alabama is then expertly swopped for the claustrophobia of the escape ship that the four hijackers and Phillips spend the final hour of the film on. Here anger rises within the ship – cramped, hot, low on water, with some of those in the ship badly wounded – while outside, the US military masses to prevent the ship making it to the Somali shore. Any idea that the pirates will triumph is removed – but the tension still exists as to how Phillips himself can survive a situation on his small boat that is spiralling faster and faster out of control.

All this superbly marshalled by Greengrass from start to finish, the film a masterclass in wringing every drop of expectation and investment from a compelling real-life story. With wonderful performances from the two lead actors, the film never once lets up in its electric pace and all-pervading sense of danger. With Hanks and Abdi superb, it’s a film that won’t let you go for a second. Inexplicably, despite a Best Picture nomination, the main elements of its success (except Abdi) – Hanks, Greengrass and Ackroyd – all missed out on nominations. That’s the problem when you are so skilled you make it look easy.
Email ThisBlogThis!Share to TwitterShare to FacebookShare to Pinterest
Labels: Barkhad Abdi, Paul Greengrass, Thriller, Tom Hanks