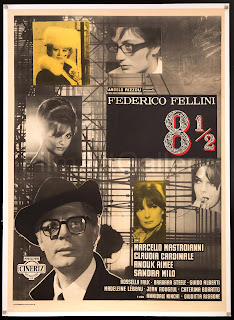 If there is a single director associated with self-reflecting films its Federico Fellini. Frequently recognised as one of the greatest and most influential directors of all time, many of his films use baroque imagery and a masterful interplay of reality and fantasy to delve deep into both its director’s own subconscious and the swirling pressures and internal conflicts that make us the people we are. 8½ is, perhaps, the greatest expression of this style of film-making, a giddy sensory delight that demands investment and wisdom to unpeel its layers and give you a chance of finding its meaning.

Frequent Fellini collaborator Marcello Mastroianni plays Guido, a thinly veiled portrait of Fellini himself. Like Fellini, Guido is a successful and visionary director, facing pressure to come up with his ‘next masterpiece’ after the glorious success of his previous film (in Fellini’s case La Dolce Vita). Like Fellini, Guido is struggling to work out exactly what statement he wants to make next, instead allowing himself to become distracted by personal issues and day-dreaming flights of fancy (literally so in the film’s opening, where Guido imagines himself flying through the sky before being tethered and pulled to earth by his producer). Most of all these distractions revolve around women, from his wife Luisa (Anouk Aimée), his mistress Carla (Sandro Milo) and recurring daydreams of Claudia Cardinale (playing herself) who could just be the muse he is looking for.

To me one of the things that can make a film great, is when the ideas in it are not obvious and tired, but when they defy obvious characterisation but throw themselves open to further thought and different interpretation depending on your mood. 8½ definitely meets this criteria, combined with the fact that it’s beautifully made and very entertaining.

Fellini’s deep dive into his own subconscious is deeply involving and intriguing. The film dances from beat to beat between reality, memory and fantasy – often leaving the lines blurred about which of these we are watching at any one time. That’s part of Fellini’s idea, that our minds are complex enough to exist on all three plains at the same time, to juggle within ourselves what’s real, what we remember, what we imagined or wished could happen and how we create our own versions of all these.

In the build-up to the film, Fellini famously struggled to identify what he wished to make and what it should be about. But while you could say that Fellini turned this creative block into a film – that, when unsure about what to make a film about, he made a film about a director who didn’t know what to make a film about – that’s to suggest a vagueness in its execution that isn’t the case. Fellini knows exactly what he’s doing here: every scene serves its purpose to explore the ennui and feelings of entrapment that an artist feels, both in his life and his craft. Far from being ambling, the film is carefully constructed and brilliantly focused.

Guido is hounded at every corner by people wanting something from him. Be it producers demanding progress, extras looking for roles in his film, actors demanding insight for their characters to his mistress looking for his attention or his wife demanding more focus from him on their marriage. The film is Guido attempting to identity among all these demands what he needs and wants from his own life – and how to build on that. It’s telling that most of Guido’s fantasies that litter the film revolve around his demands for other people to service him – be that romantically, literally or spiritually. Is part of the point of the film that we are all selfish to some extent?

It’s the film’s exploration of day-dreaming fantasy that gives it some of its most extraordinary work, coupled with Fellini’s superb and striking visuals. The opening sequences of Guido imaging literally flying out of a traffic jam (and away from the stares of the other drivers) into the freedom of the sky – before being literally pulled back down to Earth – shows how these flights of fancy give us windows into our own desires. Guido’s a confused man looking for focus and something to believe in – his constant fantasies of Claudia Cardinale seem in part longing for her to solve his creative problems, part sexual, part almost motherly, as if she can take some decisions away from him.

Other fantasies – such as an imagined conversation with a priest for spiritual guidance – lean on finding the sort of structure his life seems to be missing. (And also, in a fantasy confession of his ennui to the same priest, perhaps a need again to be told what to do.) Most of his fantasies though revolve around romance. He imagines his wife and mistress sharing anecdotes before dancing away arm-in-arm. Most famously, an extended sequence shows Guido imagining a harem containing all the woman in his life, where he is the centre of attention – and women who age beyond his interest are politely banished upstairs “to be well looked after”. The women range from long-standing crushes and mistresses, to half-glimpsed dancers and an air hostess with a sexy voice.
There is a striking honesty about Fellini putting something like this on film – and then use the fantasy he is displaying to both comment on and criticise his own internal fantasies. In the fantasy, unlike real life, his wife is an almost maternal figure (Guido has already jumped at one point in his reverie earlier in his film, to remember his mother only for her to turn into his wife), the women address Guido with harsh truths about everything from his character to his sexual performance, a revolt breaks out in the fantasy harem at Guido’s banishing of early crushes as they age (one which Guido stamps out). The harem is further set within his childhood home, adding a whole other layer of odd sexuality to it, as part of the women’s duties are to bath and wash him exactly as his grandmother did as a boy. It’s a sequence that lays itself open to multiple interpretations, but never feels exploitative or sleazy.

Large chunks of the rest of the film take place in a hard-to-define space between dream, memory and reality. Frequently scenes shift in nature half way through – Guido is followed throughout the film by a critic-turned-screenwriter, full of criticism of the intellectual shallowness of his work who, mid-rant, he imagines taken away for execution by some toughs. Gentle tracking shots around the retreat Guido is staying at – scored with a mixture of classical music and Nina Rota’s wonderful score – trip a line between real and imaginary in the sights we see. Conversations are intercut with imagined moments or might simply be happening in a pretence rather than a reality.

If it sounds like a difficult view, it’s not. Because for all the intelligent analysis of the ennui that can come from a creative block and the internalised struggle to find a balance between all the impulses that pull on us, it’s also a hugely entertaining film. Funny, wise and superbly acted. Mastroianni is brilliant as Guido, in turns giddy and world-weary, confused and resigned then ambitious and dreamlike. The rest of the cast are also excellent, with Anouk Aimée delightful as his long-suffering wife and Sandro Milo hugely entertaining as a needy but largely ignored mistress.

Fellini’s dives into memory also add both a richness and an emotional heft to the film. There are some beautifully nostalgic sequences that head back into the past. Guido’s childhood is explored with a series of wonderful vignettes. From his childhood in a wine distillery with his grandmother and aunts, full of playful energy, to the first stirring of a sexual awakening watching a prostitute dance on the beach (a quite extraordinary scene of playful flirtation, but still rather oddly innocent in its way). These scenes have captured the imagination of directors across the globe, with their power and ability to capture both the nostalgia of recollection, but also a distant magic of memory and the impact these still have on us in the present. But no body does this better than Fellini.

The best thing that can be said about 8½ is that I can imagine watching it hundreds of times, and each time seeing something fresh and new about it. And it works because its ideas are profound without being pretentious and easy enough to engage with, while never shallow. It brings depth and richness to complex internal struggles and repackages these into a rich experience that enlightens both memory and creativity. A great movie.
Email ThisBlogThis!Share to TwitterShare to FacebookShare to Pinterest
Labels: Anouk Aimée, Autobiographical films, Barbara Steele, Claudia Cardinale, Federico Fellini, Guido Alberti, Italian Film, Madeline Lebeau, Marcello Mastroianni, Rossella Falk, Sandra Milo