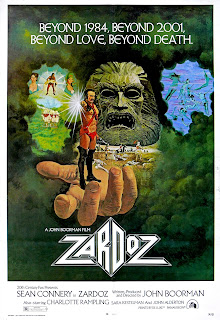 Be warned. When a director is given the money to make any film he wants – with total creative control and no interference from anyone else – you’ve got a 50/50 chance of either getting a work of genius or a piece of pap. In the case of John Boorman’s Zardoz you definitely get the latter. Zardoz is possibly one of the most bizarre, misguided, surreal and finally plain bad films you’ll see, like a walking advert for the most pretentious and terrible outreaches of science fiction.

It’s the year 2293, and the world is a post-apocalyptic wasteland. The “Brutes” live in the wastelands, growing food for the “Eternals” – immortal figures, leading a luxurious but empty, pointless existence on a series of country estates protected from the outside world by forcefields, their lives governed by a super computer. In the middle are the “Exterminators”, who control (i.e. kill and enslave) the Brutes and worship “Zardoz”, a giant flying head sent by the Eternals. Until, one day, Exterminator Zed (Sean Connery) sneaks his way into Zardoz and finds himself in the world of the Eternals and starts to lead them to question the point of their interminable immortality.

Zardoz looks overwhelmingly silly, and is often filmed and edited with such high-flown, empty surrealness, that it’s almost impossible to take seriously from the start. It looks so bizarre – with its terrible costumes, camp playing and overly designed look and feel – that it’s hard not to suppress a snigger. This is made worse by the shallow, pretentious and obvious social satire forced upon on once you start to concentrate on the dialogue.

It’s also one of those films that mistakes an incoherent, poorly explained plot – in which characters frequently change sides, motivations and aims at the drop of a hat – for a sort of mystical profoundity. The influence of The Prisoner is very strongly felt, from its commune-like setting to our “hero” being trapped in a stylised world where he is trying to work out the rules. But while The Prisoner manages, more or less, to suggest some sort of deeper meaning behind all the stylistic self-indulgence and pleased-with-itself babble, Zardoz just manages to be unengaging and heavily self-indulgent.

You don’t need a philosophy major to work out the social commentary being made in a world where the richest exploit the rest of the population to live a life of ease and content. Nor is it a surprise to find that this sort of life without challenges, continuing forever, has led to stagnated and lazy lives where everything (even, to the film’s shock, sex – although of course the muscular Connery fixes that) has lost all meaning. Frankly this world takes off-cuts of several, far better and smarter films, and remixes them together into a turgid mess.

And it looks so silly. The entire design of the film constantly shoots it in the foot. How could you take Sean Connery seriously in that costume? The Eternals wear the sort of Greek-influenced hedonistic costumes that you would expect to see on a second-rate episode of Star Trek. The film frequently uses stylistic decisions that look absurd – and try too hard – from the hand gestures used to show the Eternals’ mind control (looking like a partial lift from the Macarena) to the bizarre sequences where Zed’s memory is searched using an projector, frequently using surrealist images mixed with physical theatre that frankly looks more than a little bit silly.

Sean Connery goes at this all with a respectful commitment, even if the character isn’t particularly engaging, and is hard to relate to since most of his memories seem to revolve around rape and murder. As if recognising this, there is a late plot turn where we find out that Zed is far more than he appears. But rather than making this intriguing, it makes virtually all his actions earlier in the film incoherent. But then it’s not as if that’s a problem: Charlotte Ramping, Sara Kestelman and John Alderton as the leading Eternals swop views, sides and opinions virtually scene to scene. Rampling in particular goes between plotting Zed’s death to becoming his acolyte in one conversation. For some this might be a sort of poetry. But really it’s crap.

In amongst all the nonsense, the film has a seedy, porny view of women. The Eternals seem to walk around – perhaps because they are so indifferent to sex – virtually in the buff. Connery has sex (eventually) with most of the female cast, as well as groping several others. Boobs frequently appear in shot. In one moment so bizarre it must be a joke, Zed’s sexual drive (so alien to the Eternals) is even explored by showing him some pornographic images (including some naked women mud wrestling) to see if it gets his rocks off (sadly for them, he shows much more – visible – interest in Rampling than the images they are showing).

It all finally comes to an end in an orgy of violence intercut with images that comment on rebirth in a way that is supposed to be (no doubt) an intellectual comment on the balance between love and death – but actually is just another clumsy, empty excuse for a bit more sex and violence (and plenty of nudity). But then since the film has long since stopped making any sense (with scenes including Connery dressed as a bride, chasing himself through a hall of mirrors and briefly gaining the power to turn back time and protect others from violence with “his aura”) that it hardly seems to matter. The film had a seriously damaging impact on the careers of both Boorman (who makes a good job of the opening scene and then sees the whole film slide down a silly, indulgent and pointless mess) and Connery. Not a surprise. It’s terrible.
Email ThisBlogThis!Share to TwitterShare to FacebookShare to Pinterest
Labels: Box office bombs, Charlotte Rampling, John Alderton, John Boorman, Niall Buggy, Sara Kestelman, Science fiction, Sean Connery, Terrible Films