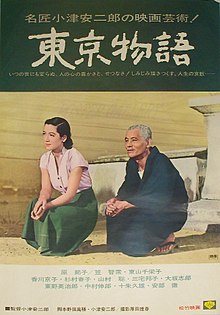 When you think about Japanese cinema, many people’s minds turn to the work of Kurosawa, or high tempo manga animations. But there is another side to Japanese cinema – a more careful, meditative, almost lyrical side – and few directors express that better than Yasujirō Ozu. Tokyo Story is his masterpiece, a film so masterfully put together – but also so restrained and simple in its telling – its reputation has grown until it is considered a contender for the greatest film ever made.

Ozu’s trick with Tokyo Story is to tell a story that is focused on a very particular time and place, but also brings with it a universal relevance. Elderly married couple Shūkichi (Chishū Ryū) and Tomi (Chieko Higashiyama) travel to Tokyo to visit their grown-up children, doctor Kōichi (So Yamamura) and hairdresser Shige (Haruko Sugimura). But their children now have their own work and life pressures – living in small, crowded homes in Tokyo that double as business places – and they just don’t have the space or time to spend with their parents. The only person who makes their time for them is their daughter-in-law Noriko (Setsuko Hara), the probable-widow of their son who went missing during the war and has not been seen in over eight years.

Ozu’s film is about a transition in Japanese culture, as the country modernises in the post-war environment and the natural deference and familial links that had previously powered much of its way of life began to fade in importance. Families are now distant, patience and respect between the generations is fading, and many in the elderly generation struggle to understand their children. In the same way, the younger generation forge their own lives and see their priorities change from those of their parents. This is an acute issue at this post-war era of Japan – but who hasn’t experienced some level of this inter-generational confusion?

That’s perhaps why Tokyo Story carries as much impact as it does. A quiet, reflective and gently paced film, it’s striking that it doesn’t place blame or cast characters as heroes or villains. Instead, everyone is, by-and-large, trying their best, struggling with pressures of their own. While it’s easy to see the children as uncaring – it’s also clear that their own lives are hugely busy, with demanding workloads and the homes they live in are small, cramped and difficult for them to live in. Shige and her husband effectively sleep on the floor of their hairdressing parlour. Kōichi struggles to fit himself, his wife, two children and a doctor’s surgery into what looks like a pretty simple two-up-two-down home. While the children are frequently thoughtless – or quick to persuade themselves that what’s easy for them is also easy for the parents – the film makes clear that there are reasons for this.

Nevertheless our sympathies are clearly meant to lie more with the parents rather than their children. Polite, quiet and determined to think the best of their children, the parents are reserved, dutiful relics of a very different Japan. They fall over themselves to thank their children for any time or patience shared with them, and feign enjoyment of the spa (packed full of young party people) their children send them to as a treat (it takes one night of no sleep for them to decide, quietly, to leave). These are people determined not to rock the boat, resolved that everyone is acting for the best.

However, it is clear the emotional impact of these events is greater than they might expect. Shūkichi, it emerges, has a history of too much drinking – and a few days in Tokyo is enough for him to hook-up with some old drinking buddies and stumble into Shige’s home late at night, drunk as a skunk. But the emotional impact is also clear in their growing closeness and regard for their daughter-in-law Noriko, the only person in Tokyo who seems to make an effort to spend time with them, rather than their own children.

Superbly played by Setsuko Hara, with a gentleness, slight timidity and genuine sense of kindness that makes her the warmest character in the film, Noriko thinks the best of everyone and desires all to be happy. For her adopted parents, however, her good treatment slowly awakens to them to the way Noriko has put her own life on hold since the disappearance of their son. His photo still hangs like a shrine in her home, and she shows no interest in moving her life on. Warm and kind as she is, she is as lonely as the parents. Tomi in particular becomes overwhelmingly concerned for this vulnerable person – perhaps a child that needs her protection in a way her own children no longer do. Staying the night at Noriko’s, their conversation touches – in a very reserved way – on deep emotional trouble. Tomi stresses her desire for Noriko to be happy – and as they go to sleep seems to be overcome with tears and emotion. But she won’t speak openly of her worries for Noriko.

It takes later events, and Tomi’s later illness, for Shūkichi to broach the subject openly, kindly telling Noriko that both of them worry about her future happiness and her waiting for a man who will never come back from the war.  They urge her to restart her life – a suggestion Noriko meets with an emotional out-pouring of tears, but also perhaps a sense of being given permission to re-start her life.

This emotional content plays out with all the more power due to Ozu’s restrained and quiet shooting style. A huge majority of the film is shot in mid-shot, with the camera positioned at the height of someone kneeling on a tatami mat (Ozu called them his “tatami shots”). This has the impact of making events play out gently in front of the viewer, a bit like a play, but giving things a strangely intimate stillness. The sort of cinema language we are used to – cross-cutting and over-the-shoulder shots for conversation – is completely absent. Ozu rarely cuts, keeps the camera more-or-less stationary and only occasionally throws in shots where the characters deliver dialogue effectively straight at the camera. This effect in particular adds to the intimacy, making us part of the scene with the characters expressing their thoughts or concerns directly to us.

In addition, Ozu beautifully allows scenes to both gradually play in and out. The cutting of most scenes allows an establishing shot of a location, followed by a prolonged series of tatami shots that start before the scene proper begins and then frequently continues for a few moments after the scenes finish. Again this makes the film all the more personal, as the characters expand and live beyond the confines of the requirements of the scenes. Watching characters silently continue to pack – or quietly sitting having run out of things to say – in some way carries as much power as dialogue, and really immerses you in the world of the film.

This quiet, meditative effect becomes increasingly engrossing, as Ozu’s slow-paced, gentle filming style lets this small-scale story play out very effectively. Although not much really happens in the story, this story of miscommunication between the generations gains a universal strength the more you let yourself get lost in it. The acting is excellent, with Chishū Ryū (playing a character twenty years older than him) and, in particular, Chieko Higashiyama extremely moving and heartbreakingly real as the parents. But what really gives the film its heart – and its sense of hope – is the beauty of Setsuko Hara’s Noriko. It’s this character that provides the hope for a warmer, stronger, more understanding future for all. As Noriko returns to Tokyo at the film’s end – cradling a gift – we hope that a cross-generational understanding is in our grasp.

Ozu’s final shot features the sounds of traditional children’s singing being drowned out by a train. It’s a sign of how progress has changed our society – but the film carries enough hope for us to promise ourselves that things will get better.
Email ThisBlogThis!Share to TwitterShare to FacebookShare to Pinterest
Labels: Chieko Higashiyama, Chishū Ryū, Family drama, Haruko Sugimura, Japanese cinema, Setsuko Hara, So Yamamura, Yasujirō Ozu