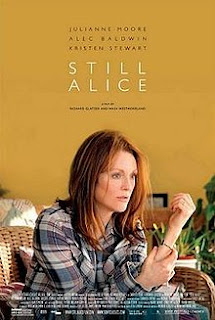 Can we imagine a more difficult illness to deal with than Alzheimer’s? Alice Howland (Julianne Moore) is a linguistics professor at Columbia, diagnosed with early onset Alzheimer’s and slowly finds her capacity to use language – and her memories – slowly fade away. At one point Alice, as her ability to function begins to disappear, wishes she had cancer instead – not only because the illness is easy for others to understand, but it offers some form of treatment however fatal the disease may prove. Westmoreland and Glatzer’s heart-rending film covers the slow decline of Alice’s abilities – from forgetting words in lectures, to getting lost in her own house searching for the bathroom, to struggling to recognise her children.

Julianne Moore is at the centre of this emotionally devastating – but tender and moving film – dominating every scene as Alice. Moore’s sharp intelligence and focus as an actress is perfect for the professor, but her dedication really comes to the fore for the sensitive and truth-laden way she explores the decline that follows for Alice. It’s a performance – like the film – that works hard to avoid sentimentality, and instead follows the heart-rending sadness of slowly feeling your personality disappear. Because what are we really but the collection of our memories and experiences – and when these are gone from us, what is really left?

Moore’s work is superb here – she won virtually every prize going, including the Oscar – and the film is told entirely from her point-of-view. Meaning that jumps in time come as a surprise to us, as they would be for Alice. At one point a distressed Alice wakes up at 2am to try and find her phone, before being coaxed back to bed by her husband John (a carefully nuanced and realistic performance from Alec Baldwin). The next scene, the phone is found in the freezer. Alice laughs and says she was looking for that last night – “that was a month ago” John quietly tells their daughter. It’s sudden moments like that, using the language of film, that hammer home the impact of this disease. It turns a whole life into a choppily edited film, where see the highlights but never recall the day-to-day detail.

The film is clear on the burden – and the struggle for us to comprehend what will happen to us. Early in her diagnosis – while recording a series of questions (such as when is your birthday and what is your daughter’s name) – Alice secretly records a video, giving instructions for her suicide when those questions become impossible to answer. It never occurs to her that, when that moment is reached, she will struggle to comprehend the message, let alone recall the 3-4 instructions to find a secret pill stash without multiple referrals to the video. But this is part of the horror of a disease that changes our ability to be who we are.

Westmoreland and Glatzer (who tragically died from complications from ALS shortly after the film’s completion) bought a personal connection to the material, and the difficulty of a family to watch a loved one slowly succumb to an illness in front of you. Alice’s family are supportive – but they also have their own lives to live. Her husband Jack does his best – but must continue with his career to fund Alice’s medical treatment, plus dealing with the walking death of a woman he has loved all his life. Her elder daughter, Anna, has her own family to raise. The illness does bring Alice closer to her youngest actress daughter Lydia (very sensitively played by Kristen Stewart), but that doesn’t stop Alice failing to recognise her after watching her performing in a play. There is no judgement here, just a recognition of how powerless family members can feel at times to really help those they love – particularly as they watch parts of their personality disappear in front of their eyes.

The film avoids the sentimentality of a hopeful ending. Two thirds of the way through the film has an uplifting moment of triumph – Alice successfully makes a highly personal speech to an Alzheimer’s conference (carefully highlighting her typewritten speech as she goes to be sure she doesn’t repeat herself). Many films would have stopped there, but Still Alice doesn’t avert its eyes from what comes next, as Alice continues to slowly regress, unable to dress herself or recognise even central elements from her life, language and words disappearing from her altogether.

So why Still Alice? Because deep down it’s still her, no matter if the ideas and words have been lost. In the moment – such as greeting her new grandchildren, even if she has forgotten that her daughter was pregnant – she becomes the woman she was. The film’s final conclusion shows that there is still, in there, the loving and warm woman she was – even if she can no longer use words or able to fully shape ideas in her head.

It makes for a wonderfully involving, realistic, but also warmly realistic and genuine film that avoids sentimental and obvious answers, but instead presents the cold truth and realism of dealing with a condition. With Julianne Moore superb in the lead role, expertly charting the condition, and also capturing the mixture of frustration and agony at the knowledge of what’s being lost to mix slowly in with a more contented placidity. It’s wonderful work in a film that will provoke tears and thoughts.
Email ThisBlogThis!Share to TwitterShare to FacebookShare to Pinterest
Labels: Alec Baldwin, Julianne Moore, Kate Bosworth, Kristen Stewart, Richard Glatzer, Wash Westmoreland