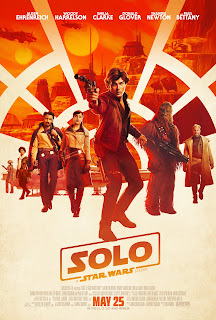 Solo did the impossible. No not the Kessel Run in 12 parsecs. It showed you could release a Star Wars film that lost money. How could this happen? Well the easy solution is to point at the film’s disastrous shooting. Lego Movie directors Phil Lord and Christopher Miller were originally announced as its directors, making their live-action debuts. But Lord and Miller lacked experience, and a litany of complaints – poor direction, a demand for constant improvisation slowing shooting, failing to get enough angles to allow options in editing – led to them getting fired and replaced with Ron Howard.

Unfortunately, even though large parts of the film had already been shot, Howard still needed to go back and reshoot large chunks (and recast, with Paul Bettany replacing the Michael K Williams as the film’s villain due to a scheduling clash). The budget ballooned to nearly $300million, a sum (with marketing costs) the film didn’t stand a chance of hitting with its poor initial buzz and mixed word of mouth. Not to mention the general (misguided) poor reaction from the core fanbase to Last Jedi, which had literally only just left theatres as this film prepared to launch.

If it seems a little unfair to open a review of the film with an anecdote about its making, that’s because the film’s tortuous journey to the screen is more interesting than most of the things that actually ended up in it. It’s an origins story for Han Solo (gamely played by a trying-his-best Alden Ehrenreich), which traces his early days towards becoming the smuggler we know, with the background given for virtually every aspect of the character: meeting Chewie, how he got his surname, where he found his blaster, how he did he win the Millennium Falcon from Lando (Donald Glover, who with his charisma and cool is the only one who manages to reinterpret his character to feel both fresh and a natural predecessor of Billy Dee Williams’ interpretation) and just how did he do that Kessel Run in 12 parsecs?

If that sounds a bit like the film is a series of nostalgic box ticks… that’s kind of because it is. The impact is made worse by the fact that nearly all its events – from Han meeting his “mentor” Beckett through to the end of the film as he jets off to do a job for Jabba the Hutt – seem to take place in a week. As so often, the modern Stars Wars films manage to make its universe as small as possible. The sense of wearying accumulation as every half reference ever made in the old films is given a backstory, makes you wonder how boring the rest of Han’s life must have been if everything he ever talks about is connected to this one job.

The telescoped timeline also has a serious impact on much of the film’s relationships. Han and Chewie get by fine because we’ve already invested in that friendship – and Ehlenreich and Suotamo do a good job of building the regard between these two, one of the best beats from Howard’s direction. But other relationships get short-changed, particularly Beckett. Played with a maverick gusto by Woody Harrelson, this character is meant to be a model of the sort of heartless mercenary Han Solo starts A New Hope as. But the relationship of the two characters never works, because there is no sense of bond – they’ve known each other a week or two at best, and the emotional trust between them doesn’t exist, so the inevitable betrayal (when it comes) means nothing.

The other principle relationship between Solo and his childhood sweetheart, the equally mercenary Qi’ra, similarly suffers from getting lost in the shuffle of ticking off iconic references. It’s not helped by the total lack of chemistry between Ehlenreich and Emilia Clarke. Clarke herself feels painfully miscast in a role that doesn’t use any of her brightness and wit, instead pushing her into the sort of fantasy-genre, fanboy’s-dream woman she might find herself trapped into playing. This links in strongly with a terminally uninteresting criminal gang plot in which a wasted Paul Bettany – playing someone who barely seems to manage to have a personality – is the mysterious crime lord manipulating everyone.

The film goes from set piece to set piece, but none of them really stand out, and all are shot and edited together with a sort of bland competence that perhaps you could expect from a master craftsman like Howard, who works better with actors than he does special effects. The film clearly wants to go for a Firefly vibe (with its heists, mismatched criminal gang, double crosses and damaged hero not wanting to get involved in the problems of others) – and there is something quite sad that this film about an iconic character feels the need to rip off a TV show that ripped off a lot of the vibe of that original iconic character.

But then that’s the problem perhaps. This is a wallowing in nostalgia that depends on your affection for Harrison Ford’s masterful Han Solo – but which will only serve to remind viewers that, for all his work, Ehlenreich is no Ford. It also doesn’t help that the film, by its very nature, can allow no development for Solo. This is a character that spends all of Star Wars as a cynical and selfish hired gun, who acts without thinking and has no interest in helping others if there is nothing in it for him. Since Solo basically starts this origins story like this, he therefore must end the film in the same way – so other than becoming a bit more competent and worldly-wise, he’s stuck not developing in any way. This makes for a film that feels even more like a slightly pointless exercise in nostalgia.

For all that, it has its moments and is fun enough – and certainly not the worst film in the franchise. But it’s the first sign, that Disney should have heeded, that nostalgia and retelling familiar stories over and over again was not a guaranteed box office smash any more. By rooting another film in things introduced in the first two Star Wars, it reminds us again that this is a small and incestuous universe, where we see the same faces over and over again. With a film where every scene is a homage and every possible piece of trivia is laboriously given a back story, that feeling grows even more.
Email ThisBlogThis!Share to TwitterShare to FacebookShare to Pinterest
Labels: Alden Ehrenreich, Box office bombs, Donald Glover, Emilia Clarke, Jon Favreau, Paul Bettany, Phoebe Waller-Bridge, Ron Howard, Star Wars, Thandie Newton, Woody Harrelson