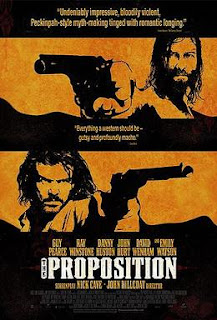 In the Australian outback at some point near the turn of the last century, a gang of ruthless killers are finally tracked down and killed by the police. The only survivors are Charlie Burns (Guy Pearce) and his younger brother Mikey (Richard Wilson). Charlie is offered a proposition by British émigré police captain Morris Stanley (Ray Winstone): find and kill Charlie’s other brother, the even more ruthless Arthur (Danny Huston), in nine days and Charlie and Mikey can go free. Will Charlie do it? And what view will Morris’ superiors take of his unusual decision? Either way violence and bleakness will ensue in the ruthless world of the Australian outback.

Scripted by Nick Cave – who also contributed the film’s sparse and haunting score – The Proposition is a dark, challenging and difficult film. It’s bleak, nihilistic and lacking in any real sense of hope or warmth. It presents a world where life is cheap and blood flows freely. All of this set in a wild, open-aired, dead, dry and dusty environment that in its gaping wildness and emptiness seems to consume the men who walk into it and leave them unhinged and capable of any depth of inhumanity.

How can there be any hope for mankind in all this? No wonder Stanley’s wife Martha (an intriguing performance of both optimism and disillusionment walking hand-in-hand from Emily Watson) tries to turn their house into a little slice of England, with a nice fence and traditional garden. It’s almost like she’s trying to slice something recognisable and safe from an environment that feels like it crushes everything it touches. It contrasts with every other ramshackle shack we see in the film, or dusty sandstone building – or the homes that most of the characters fashion among the rocks and the outback. What chance does civilisation have in this wild world?

It’s a world of ruthlessness where life is cheap. The local sport seems to be killing native Australians – something both police and gangs brag about. The native tracker used by the police – played by Walkabout’s David Gulpilil – quietly watches on as his drunken employers celebrate the (mercifully off screen) killing of a group of native Australians accused of murdering an Irish settling family. There is no pardon for him – later his throat is contemptuously slit by one of his fellows who now works as a sharp-shooter with Arthur’s gang. Hillcoat and Cave’s Australia has not a single touch of romance  or fellow feeling, but instead feels like a waiting room for hell. 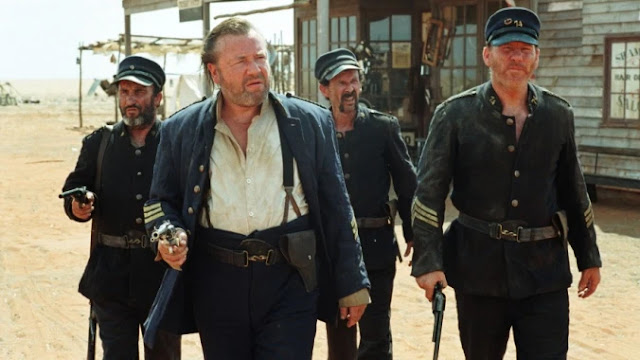 Stanley is out of place here, not only by his Englishness, but also because his tough and pitiless policing is dwarfed by the cruelty he encounters. Ray Winstone gives one of his finest performances here as a toughened veteran who slowly realises he has only skimmed the surface of the brutality man can show man. Brutal and determined as he is, he has rules – and a wife he loves and a home he values – and that puts him at an utter disadvantage when going up against the amoral likes of Arthur Burns. Winstone’s Stanley also has a sense of fair play – he will struggle in vain to prevent a lethal flogging for Mikey that obsequious town mayor (a very good David Wenham) wants to inflict to placate the town. He frowns on the persecution of the indigenous people and treats his house servant well. Is it any wonder he isn’t remotely prepared for the bloodletting Arthur unleashes when he rides into town?

Danny Huston does excellent work as the poetic Arthur who lacks any touch of empathy. Softly spoken and chillingly calm at all times, with a lilting Irish accent, Arthur slaughters without any mercy and can charmingly undertake any level of depravity and violence. From mutilation to rape, from sudden slaughter to lingering sadism, worst of all it never seems to be personal with Arthur. More just a way of alleviating his own boredom with the world. Is there something about life in the outback that has turned Arthur slowly and quietly insane? Perhaps so, and it fits with Hillcoat and Cave’s nihilistic view of humanity as a destructive force with very little room for hope.

Guy Pearce’s Charlie perhaps offers what little hope we have – and even he is a murderer. Pearce does quiet, generous work in a reactive role, tipped pillar to post and dealing with conflicted family loyalties as well as some sense of right and wrong. Enough of a sense at least to believe wanton murder and destruction as practised by Arthur is too much. Pearce is a quiet, enigmatic figure in the film – perhaps a man struggling to work out where he sits. It’s a performance that cedes a lot of the fireworks elsewhere, with a moral conundrum that is almost deliberately elliptical, but striking nonetheless. 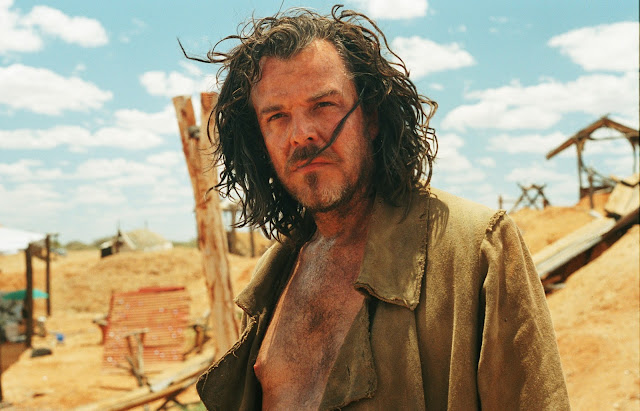 The Proposition is a tough and difficult film. It has a slightly disjointed narrative that at times skips gently over events or moves swiftly from one to another but missing connective events in between. It has the feel of a fever dream, the sort of bizarre tale you might throw together out of half-remembered nightmares. It allows wonderful opportunities for actors – all mentioned, and also John Hurt quite delightful as a drunken but deadly bounty hunter, his wizened looks perfect for the overbearing wilderness. Sure it’s a western that runs rampant with destruction, but it’s also a dark stare into the evil heart of man. It may end with a slight note of hope, but it’s an obscured and uncertain one and mixed in with more than enough suffering and destruction for the survivors.