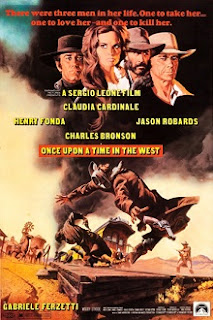 Sergio Leone’s Westerns were always based, first and foremost, on his own love for the genre – and the great filmmakers, from John Ford onwards, who made them. Returning to the genre for the final time – putting on hold (for what turned out to be nearly fifteen years) his plans for a New York gangster film – Leone wanted to make his final, and ultimate, tribute to the Hollywood western. Collaborating with Bernardo Bertoloucci and Dario Argento (now there is an odd trio!) on the scripting, Leone’s final Western is a sweeping, grandiose, operatic Western littered with visual quotations from films he loved.

The story rather takes second fiddle to the general ambiance and visuals, but it never bothered Leone to have only the sketchiest of plots stretched across the many hours of his movies. The railroad is being built across America – changing the face of the West as it goes. Frank (Henry Fonda), hired gun of crippled railway tycoon Morton (Gabrielle Ferzetti), guns down farmer Brett McBain and his children. He had been sent to threaten them to clear off the land of Sweetwater. But why? And how will the return of McBain’s new wife Jill (Claudia Cardinale) – now heir to all of Frank’s holdings – affect their plans? And why does the mysterious “Harmonica” (Charles Bronson) – a shadowy gunman with no name have such an interest in events, and in Frank in particular? And will criminal gunman Cheyenne (Jason Robards) and his gang – blamed for the McCain killings – be able to establish their innocence?

The answers to all these questions come slowly – and often confusingly – in this long, slow but – as with many Leone films – engrossing Western, which features 3-5 minutes of Morricone build-up and extreme close-up before even the slightest action. This makes it very easy to mock, and perhaps by this point Leone had started to believe too heavily that he was an artist daubing in genre, rather than a purveyor of entertainments. Certainly, Once Upon a Time in the West is consciously weighted down with its own importance, it’s ominous sense of events heading to a pre-ordained conclusion and its half-hearted attempt to depict itself as sitting at a crossroads in American history, as technology squeezed out the old West.

But somehow you give Leone’s film a pass for all its many faults because it’s assembled with such unrivalled skill and breathtaking pizzazz. Sure the film is only half as smart as it thinks it is, but when at its strongest it offers unrivalled entertainment. Leone also mastered here his balance between the slow, tense, agonising build-up to violence – followed by its sudden and brutal enactment.

Never is that more clear than in the film’s opening ten minutes which features three gunmen (among them Ford favourite Woody Strode and reliable minor bad-guy Jack Elam) waiting at a train station for what turns-out to be the arrival of Charles Bronson’s “Harmonica”. The three gunmen sit, waiting, in silence. Around them the everyday sounds of windmills, buzzing flies and dripping water builds and relapses with all the dread of distant thunder. Leone’s camera crashes in for long, intense close-ups, as if drilling down into the souls of these bored men, the camera studying every detail of their faces. After almost ten minutes – during which the credits roll – “Harmonica” arrives. And promptly shoots all three men dead in seconds. You know it’s coming, but the tension and expectation of this confrontation makes the entire sequence compelling.

It’s a trick that Leone repeats time and time again. Effectively the whole film is only prolonged extension of this sequence – the inconsequential back-and-forth of the lacklustre plot all really about giving us a chance to drill down into the character of Henry Fonda’s bad-to-the-bone Frank, while we wait for the inevitable gunfight between him and “Harmonica”. Leone’s film is a triumph of mood, filled with sweeping beautiful camera shot and luxiously paced editing, all mixed down with some stunning scoring from Ennio Morricone.

Once Upon a Time echoes a fairy tale in its title, and that’s what it is. For all that Leone attempts to throw in plotlines around progress, the influence of big money and the new order leaving gunmen behind, really everything it knows about America is taken from movies. Leone litters the film with visual quotes from High Noon, Shane and dozens of others, most especially Ford (he even insisted in transplanting some of the scenes to be shot at Monument Valley, which led to merry hell trying to get the other Spanish-shot locations to visually match). The entire film unfolds like a dream. At about the half way mark in particular – this might be due to cuts to be fair – the narrative suddenly becomes almost deliberately unconnected, key events seemingly skipped over and sudden character reversals taking place. There is a rumbling sense of everything in the film being artificial and the characters themselves being manipulated by something larger than them (like a film director!).

This is further heightened by “Harmonica” himself. Played with an empty blankness by Charles Bronson – the camera zooms into his expressionlessly craggy face endlessly as if searching for meaning – “Harmonica” is an almost mystical presence. He’s always in the right place at the right time, seems to be the only person in the film who knows what’s going on and Leone even shoots him regularly sliding into frame, as if the camera has stumbled upon him at the least expected times. Perhaps Bronson’s lack of real character helped make him perfect for this near-mystical presence. It also fits in with the shamanic feeling of a film where frequently not much happens at great length, but the inconsequential moments of events are filmed with a pregnant importance.

Compared to him the other principles are painted in earthy tones. Robards makes his bandit – who switches allegiances and escapes from undefined imprisonment several times in the movie – a jovial, grimy figure with a rogueish temperament. Claudia Cardinale – in what passes for a strong female character at the time – is a whore with a heart of gold who may, or may not be willing to do anything to ensure her own survival (the film is unclear). Is she a ruthless woman using sex as a weapon? Or is she the sort of radiant Earth-mother that the new West needs? Or is she a bit of both? The film isn’t really sure.

What it is sure about is that Fonda’s Frank is the meanest of the mean. Looking lean and tough, Fonda revels in the chance to play a villain – and not just any villain, this grinning sadist is so mean the first thing he does is gun down a child on screen. Leone loved Fonda – and above all he wanted those “baby blue” eyes to be the thing the viewers see as unspeakable deeds take place, expecting the cry of “Jesus Christ, that’s Henry Fonda!” Frank is a bully and tirelessly ambitious, and if we never get a real sense of what motivates him, it’s balanced by Fonda’s charismatic viciousness in the role.

It’s a pointer though to the fact that this is not a film about the West – as always the strange mixture of accents, faces and locations never makes the film feel for one moment like a real slice of America – but rather a film that is aiming to reflect the romance of movies. It’s a piece of Americana, that is really a love letter to other films. Perhaps it’s one of the first post-modern films ever made? But really your appreciation of the film can only really be complete if you have seen a lot of Westerns. Then it’s fairy tale like logic, and Leone’s operatic style and languid pace suddenly make sense. It’s not a film deep in meaning, other than perhaps our own love for cinema and the story it tells.
Email ThisBlogThis!Share to TwitterShare to FacebookShare to Pinterest
Labels: Charles Bronson, Claudia Cardinale, Gabriele Ferzetti, Henry Fonda, Jack Elam, Jason Robards, Keenan Wynn, Lionel Stander, Paolo Stoppa, Sergio Leone, Spaghetti Western, Westerns, Woody Strode