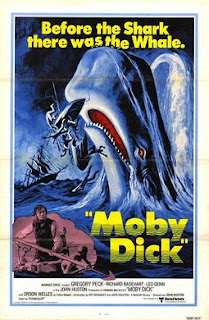 There might be fewer books that lend themselves less to being turned into a film than Herman Melville’s monumental Moby Dick. Perhaps the greatest of all American novels, its’ the story of New England whaler the Pequod’s Captain Ahab’s obsessive quest to kill Moby Dick, the great white whale that took his leg. But it’s also an intense intellectual and spiritual journey into the nature of humanity, which has thrown the book open to multiple interpretations, even more tempting with a book that defies explanation. Try capturing that on film.

John Huston’s Moby Dick is a noble attempt, more criticised at the time than it probably deserves, with the visual language of film unable to ever capture the metaphorical weight of the original novel. What Huston needed to do is to try and capture some of the spirit of the novel, bring its central story to life and make a film that ideally makes you want to search the book out. I would say Moby Dick succeeds on that score.

Reducing the monumental novel (often described as one of the great “unread” books in people’s homes) to under two hours, brings out the narrative, stressing the surface story as an adventure on the high seas, a doomed quest under an obsessive captain. The detail of the reconstruction of the whaling ship, its operations on the sea (including some graphic slaughter of some, fortunately, fake whales) and the atmosphere of the time is brilliantly reconstructed. The film is staffed by an extraordinary collection of actors, whose faces speak of lives led in salt-spray.

So, starting with the idea that no film could ever capture the depth and richness of the book, Moby Dick is a decent, smart enough attempt. The key themes are there in strength. It captures obsession and the idea of the ship being a sort of microcosm of society, led astray by a leader who has his own passions at heart, over and above the well-being of the crew, but has enough magnetism to pull the crew with him nevertheless.

Huston laboured long and hard to bring the film to life, in a wrestle with Melville. Even adapter Ray Bradbury claimed he had “never been able to read the damn thing”, with Huston and Bradbury clashing constantly during the writing process. It works, and Bradbury’s adaptation is beautifully done, but in a way John Huston himself was a sort of Ahab with the book as his whale.

In fact you could argue – as many have – that Huston himself was the natural casting for Ahab (take a look at Chinatown to see what I mean). A charismatic raconteur, ruthless and fixated on his goals, that’s an Ahab we could buy into. Perhaps in that world, Orson Welles – here giving a neat little cameo that avoids bombast as Father Mapple – would have been the perfect director, marrying mastery of cinema with a wonderful understanding of transforming literature into film.

Gregory Peck is the Ahab we do get. At the time the casting was strongly criticised – people just couldn’t buy the straight-as-an-arrow Peck as the destructively bullying Ahab. Peck himself remained strongly critical of his performance here all his life. Separated from the time, Peck’s performance is stronger than you anticipate, capturing a gruff fixation and magnetic charisma that you can believe pulls people in. Peck may strain a little too hard for the elemental anger, but Peck’s Ahab has a bass richness, a sort of inverted Lincolnish (he even looks a little like Lincoln) self-righteousness that makes you believe he could rouse a ship to choose its own destruction. Peck also brings a spiritually dead look to Ahab, a man turned from hope to destruction. Huston teasingly keeps Ahab in reserve for almost a quarter of the film until his first appearance, allowing the build in the audience’s expectations.

The casting of the crew uses a fine selection of British and Irish actors (the film was shot in Ireland), with Harry Andrews particularly strong as jolly but non boat-rocking first mate Stubb. Leo Genn gets the meatiest material as Starbuck, a decent, working man with a firm sense of principle but who lacks any sense of the charisma needed to swing people to his point of view. The film bumps up Starbuck’s role, centralising his growing unease at Ahab’s madness, opportunities which Genn (nearly underplaying to contrast with Peck’s theatricality) works a treat. Richard Basehart – a good voice for narration but much less of a presence – gets a bit lost as Ishmael. There is an intriguing bit of casting – something that would never happen today – that sees Austrian aristocrat turned actor Friedrich von Ledebur play the Maori-inspired Queequeg, a visual disconnect that is more than a little distracting for a while.

Moby Dick is beautifully filmed and assembled, even if Huston throws in the odd obvious shot – sun beating down on the ship, a close up of the whale’s eye. It has a unique look – on the remastered blu-ray – with the image reflecting the faded, bleached look of whale prints (an effect achieved by superimposing a black-and-white negative over a colour one, draining most of the colours our), which gives it a great deal of visual interest. It’s never going to replace the book – but honestly what could? As an exploration of the ideas at its heart it’s wonderful – and a great prompt to pick it up – but with a marvellous sense of life on sea, a stirring score and a wonderful sense of intelligent construction it more than works.
Email ThisBlogThis!Share to TwitterShare to FacebookShare to Pinterest
Labels: Bernard Miles, Gregory Peck, Harry Andrews, James Robertson Justice, John Huston, Leo Genn, Literary adaptations, Orson Welles, Richard Basehart