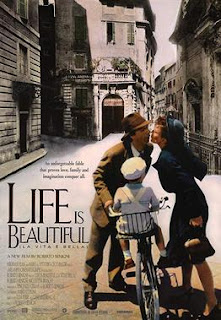 How can we confront the dark facts of our past? It’s a question that perhaps feels more relevant with each passing day. History is full of horrors and terrible deeds. And it’s easy to think of those who lived through terrible events as merely victims, a single homogenous mass of the suffering. Life is Beautiful however tries to look at perhaps the most terrible of events, the Holocaust, with an eye that acknowledges the terror but also suggests that love and hope can exist alongside the worst parts of humanity.

In Tuscany in 1939, Guido Orefice (Roberto Benigni) is a sharp-witted, if accident-prone, waiter who dreams of setting himself up as a bookshop owner. He falls in love with Dora (Nicoletta Braschi) and, after a courtship involving “accidental” meetings, comic interludes and finally Dora leaving her engagement party (where she is due to marry a brutish bully), they marry. A few years later they have a son, Giosue (Giogio Cantarini). But the war has gone against Italy, and now Guido and Giosue, as Jews, are arrested and sent to a concentration camp. There Guido does everything he can to try and protect his son from the horrors around him, by pretending the camp is an elaborate game to win a tank, with points won if he can hide from the guards and not cry. Guido spins his own forced labour, and danger of execution, to Giosue as part of the same game.

Directed by and starring Roberto Benigni, Life is Beautiful was Benigni’s statement that events as terrible as the Holocaust cannot drive hope and love from a father’s heart, and that both tears and laughter can come from the same beautiful place in the human spirit. It’s been called a comedy about the Holocaust, but that’s unfair. Guido may use comedy and try to turn everything that happens to them into a camp an elaborate game for his son – but that’s to stop a 5-year-old child from being traumatised. For us watching, we know the terrible place Guido and his son are in – and we know the appalling things that are happening around them.

Life is Beautiful is really two films, and only one of them is a comedy. The first half is a Chaplain-esque love story, a clumsy but good-hearted and comic scruff-pot winning the heart of a decent and loving woman. It’s full of the sort of slapstick and comic routines you could expect from the masters of classic American silent comedy. It hits every expected beat, from our hero being the sort of wily but honest and kind little guy we can root for, to all his opponents being sharp-suited bullies while his love is charming and tender. For the first half of the film there is little that, really, stands this film out from the ordinary. Benigni is a charming performer – with just the right mix of bashfulness and bombast – but it’s nothing you’ve not seen before.

But then that half of the film exists to give the second half of the film its power. As soon as the time-jump happens, it’s like watching the Little Tramp wander into a horrific tragedy. From the moment Guido closes the shutters on his shop – to reveal the words “Jewish Store” graffitied across it – the sunny Tuscan world around our heroes grows darker and darker.

Benigni deliberately avoided a sense of realism to his Holocaust imagery – he felt only documentary could really do it justice, so avoided making his death camp look or feel anything like a real camp – but the audience is more than capable of filling in the blanks. The second half of the film, with Guido and his son in the camp, is not funny at all. But that doesn’t stop Guido busting a gut to entertain his son at every moment – or prevent us building a deep emotional connection with a father who is suppressing his own pain and fear in order to try and protect his son. The father who knows the business of this camp is death, who knows that Dora has also been arrested and placed in the women’s camp. Who knows their only hope is to pray the war ends before they die. It’s bleak stuff, and the fact that Guido keeps up a front of humour doesn’t make the film a comedy. 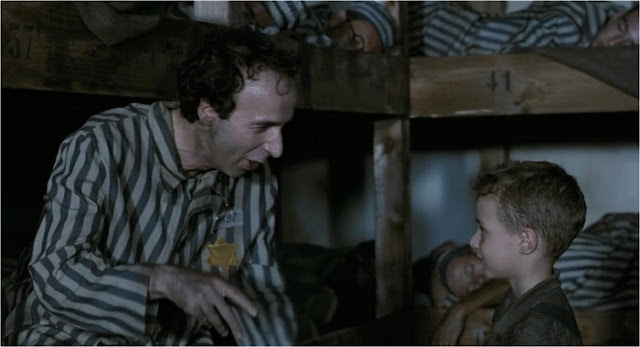 It’s why it the second half of the film carries such impact. Not only have we invested in the comedic warmth of these characters in the first half, but seeing them trying to keep hope alive in their own way in the bleakest of situations is completely moving. Sure there are funny moments – the most notable being Guido’s improvised interpretation of the guard’s explanation of the camp rules into an explanation of the rules of the game he is trying to get his son to believe in – but really it’s not a comedy because we know too well the dangers that surround them.

Sure the film is sentimental and in many ways manipulative. It would be hard pressed to not create emotional moments from such material, and from the sacrifices of Benigni’s character. But it still works and the film has a few shrewd moments of personal insight, not least from the introduction of Horst Buchholz’s German doctor. Dr Lessing knows Guido from his days as a waiter in Tuscany – but encountering him in the camp waiting tables at the officers’ mess, it doesn’t even begin to occur to him that Guido’s position has changed or his family’s lives are in mortal danger. The dehumanising of this extermination system doesn’t just turn people into murderers, it turns decent people into thoughtless observers.

Life is Beautiful does carry a real emotion wallop towards its end. It was famous as “the Holocaust comedy”, but it uses comedy and the conventions of Hollywood romance to build our empathy for characters who then find themselves in a Holocaust movie. And it treats the Holocaust itself with a deep reverence and respect, never making the deaths of millions anything like a joke. Sure, you could argue that it still downplays the terrors of the Holocaust – but then we know the background so well, do we need the gaps all filled in? And while you might say hope from such a terrible setting is not the message that should come out, sometimes it feels like the message we need.
Email ThisBlogThis!Share to TwitterShare to FacebookShare to Pinterest
Labels: Holocaust films, Horst Buchholz, Marisa Paredes, Nicoletta Braschi, Roberto Benigni, World War Two