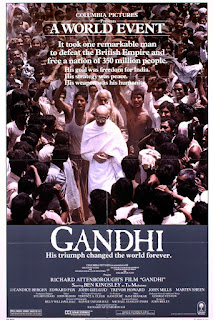 In 1962, Richard Attenborough was approached by Motilal Kothari, an Indian civil servant, who believed Attenborough was the man to bring the life of Mahatma Gandhi to film. All this despite Attenborough having never directed a film. But the life of one of history’s greatest men, and passionate advocate of peace and non-violence, spoke deeply to the socially-engaged Attenborough who dedicated 20 years of his life to bringing the film to the screen, immersing himself in Indian culture along the way and winning the support of Nehru (until his death delayed the project again) and Gandhi’s family. The eventual film was a huge success, cementing the public perception of Gandhi and beautifully capturing both the importance of the story, and its emotional heart.

Opening with Gandhi’s assassination in 1948, the film covers in flashback his life from combatting anti-Indian prejudice in South Africa as a young, British-trained, lawyer to his return to India and long involvement in the campaign to win India its independence from the British Empire, stressing non-co-operation, his eventual success but also his failure to hold the Hindu and Muslim parts of the country together and his attempt as “father of the nation” to put an end to religious violence, a failure that will eventually lead to his assassination.

Attenborough’s grand, epic film marshals thousands of extras to bring to life pages of history. At times events fly by with speed, but Attenborough never loses sight of the emotional heart of the story – both Gandhi and the status of Indians as not being masters in their own home. Attenborough directs scenes of real power, most strikingly a heart-rending peaceful march on a salt works (the tax on salt use being a major burden on many poor Indians) that culminates in line after line of peaceful Indian protestors walking calmly forward to be beaten down by soldiers. Despite being the grandest and largest of films, it allows questions of pure morality and decency to lie at its heart and, supported by a parade of British acting greats, keeps the Indians at the heart of their own story and the masters of their own destinies. 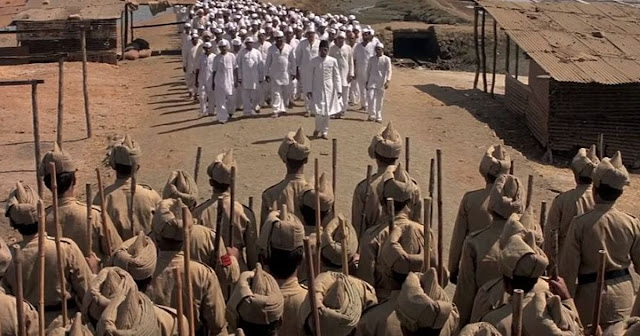 The film’s impact though may be directly connected to the gloriously transcendent performance of Ben Kingsley in the title role. For years it was believed the film could only work with a British actor in the title role – imagine how it would be received today if Gandhi had been played by (as it nearly was) a browned-up Anthony Hopkins or John Hurt (who famously told Attenborough he looked absurd). Instead half-Indian unknown RSC actor Ben Kingsley took the role. Kingsley so completely and utterly immersed himself in Gandhi – everything, the physicality, the morality, the voice, the intellectualism – that not only has he become so completely associated with the role but it’s hard to imagine anyone else playing it.

Ageing almost 50 years over the course of the film, Kingsley’s Gandhi is above-all moral, softly-spoken, observant and considerate – the very spirit of the original man seems to be up on the screen. Far from the sort of histrionics you might expect from a subject of an epic movie, Kingsley is not afraid to be quiet, gentle even underplayed. He completely understands that the charisma and power in Gandhi laid in his moral authority, not his speech-making, but his careful example-setting of even-handedness, patience and desire for peace.

But Kingsley is also willing to show Gandhi as shrewd and stubborn, even while mixing it with both a deep pain at the loss of life. Kingsley is superbly good at the smaller quieter moments – he wrings heart-rending force from the loss of his wife (a similarly impressive and quietly authoritative performance from Rohini Hattaggadi), which partly works because the film quietly centres the truth and faith in their marriage. This is extraordinary work from Ben Kingsley, that seems to carry not just the entire film but the sense of a nation.

Attenborough though was a director who was at his best when working with actors, and his ability to coax truthful and heartfelt moments from quiet scenes are what gives the other sequences the emotional force to make them work. Attenborough seemingly called in every favour to assemble the supporting cast that backs up Kingsley, many of them juggling only a few scenes. Among the stand-outs we have a martially certain Edward Fox as General Dyer, an archly arrogant John Gielgud and a frustrated John Mills as viceroys, Trevor Howard representing decent British rule as an honest Judge and Martin Sheen as a reformist minded journalist. That’s to overlook dozens of others in small roles, all of them clearly committed to the intention of the project.

The film though allows the Indians themselves to take centre stage, even if it is easy to criticise some of the simplifications of many of the issues that would eventually culminate in partition. The film has a clear hostility towards the idea of religion, seeing it as the root of much of the violence that erupted in India in the last years of Gandhi’s life. While Roshan Seth is excellent as Nehru, the character is portrayed more as the faithful follower of Gandhi than the shrewd politician in his own right (it’s a role most of the other leading members of congress are also placed in). Alyque Padamsee carries a high level of charisma as Jinnah, founder of Pakistan – but the film can’t quite resist painting him into the corner as a semi-villain, ignoring Gandhi’s desperation to get Jinnah to invest in a united India. 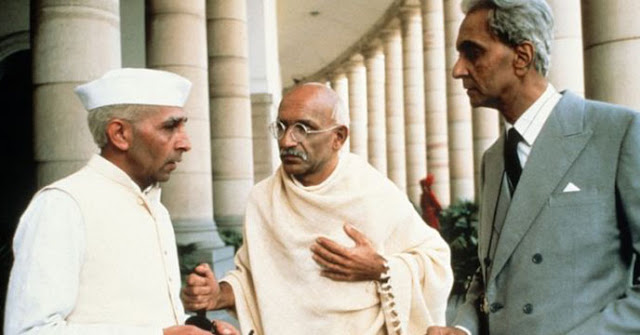 It’s part of what has been seen since as the film’s more hagiographic stance towards Gandhi. Certainly later historiography has outlined a few shades of grey in Gandhi – although I would argue that seeing him as a man and not a saint only heightens (similar to Mandela) the awe at what he went on to achieve. The film’s whistle stop tour of Indian history – taking in every major event and personality, some in a matter of moments – looks particularly old-fashioned now with our current trend being biographical films that focus only on crucial moments, not the whole life. It adds a slight air of schoolboy history to the project, an unfortunate side-effect of the passionate earnestness with which the story is told.

But then even in 1982 – when it lifted 8 Oscars including Best Picture, Director and Actor and most of the technicals – it was seen as slightly old-fashioned. Attenborough has generously repeatedly said that he believed Steven Spielberg was more deserving of Best Director for ET. And it’s true that Attenborough was in many ways a producer at heart with these epics than an inspired director like Lean. His marshalling of crowds, finances and simply forcing the will together to make the picture – and to allow it to focus on Indians rather than Westerners – is a tribute to his organisational skills. His strengths as a director were more in performances, and as with many of his epic films the most memorable moments are smaller, intimate ones. The larger moments are shot with an assured professionalism rather than inspiration, but Attenborough understands how to wring emotion from moments and how to let character drive action.

Gandhi works above all because even today you can see it is a passionate labour of love, that everyone involved in clearly believed in passionately. It may well be that at times it is workmanlike or simplistic – and covers the sweep of history with an earnest completeness, even while it is unafraid to be critical certainly of the British – but it still invests it crucial moments with humanity, life and deep emotion. You can’t help but be moved by it – and you are instantly stunned by the sheer brilliance of Kingsley as Gandhi, one of those performances like George C Scott as Patton which seems more like the man than the real thing. Gandhi may be old fashioned, but that’s not a crime when the quality is still there.
Email ThisBlogThis!Share to TwitterShare to FacebookShare to Pinterest
Labels: Ben Kingsley, Edward Fox, Geraldine James, Ian Bannen, Ian Charleson, John Gielgud, John Mills, Martin Sheen, Michael Hordern, Nigel Hawthorne, Richard Attenborough, Trevor Howard