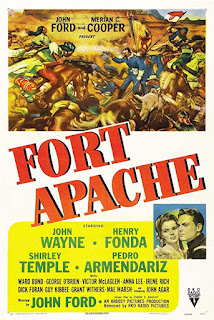 Fort Apache was the first of Ford’s “cavalry trilogy”, exploring problems and personality clashes of remote cavalry posts in the middle of what used to Native American territory. Contrary to what you might expect, this is a complex, intriguing film that brilliantly explores tensions between very different ways of thinking and issues of class in America, which are so often overlooked. If it sells some of the tensions of clashing ideals down the river with an ending that fully endorses the myth over the reality, the fact the film makes clear that the idea of a well-meaning army all pulling together is a myth says a lot.

John Wayne is Captain Kirby York experienced, more liberal minded acting commander of Fort Apache. Aware of the difficult balance of maintaining good relations with the Apache tribe while protecting American expansionist interests, he’s perfectly suited for keeping the peace in the West. Unfortunately he’s replaced by Lt Col Owen Thursday (Henry Fonda), an arrogant, class-conscious – if polite and honourable man – who applies the letter of the law to all his dealings, so obsessed with rules (he protests “I’m not a martinet” while bemoaning the lack of proper uniform in the dust filled heat of the West) that he sees no reason to moderate even the most corrupt of the local officials who have driven the Apache to revolt, instead demanding the Apache submit. Disaster is on the cards.

Ford’s film revolves around the personality clash between York and Thursday. While both dutifully respect the chain of command, it’s clear that York has a closer bond and understanding with both the men under them and the complex considerations to balance when dealing with the Apache. Thursday, on the other hand, is an arrogant, prickly character, bemoaning his “demotion” from a field rank of General in the Civil War, to an “obscure” fort. A posting he is determined to escape from with an honour laden victory as soon as possible.

With Ford’s romantic regard for the ordinary soldier and regular Joe, the sort of posh New-Englandish Thursday is a clear stand-out. A stiff-backed martinet, he never listens to others (he constantly needs to be reminded about names) and has a snobbish disregard for Lt O’Rourke (a callow John Agar) whose father, far from being officer class, is an Irish Sgt Major at Fort Apache. Thursday is notably uncomfortable at such Fordesque events as a NCO ball, or when talking with the men – he even looks unsettled in the desert, wearing full uniform and avoiding a hat in favour of an army cap with a dust-sheet attached at the back (no Ford hero would be seen dead wearing such a thing).

The character works so effectively because he is played so delicately and skilfully by Henry Fonda. Cast against type – and looking older – Fonda plays Thursday as a frustrated man, terrified of failure who simply lacks the flexibility to adjust to situations. Rules instead are there to be followed in detail, regardless of his personal feeling. Corrupt government agent Meacham he treats with contempt, but he will defend his incompetent regime in Apache land to the death. With the Apache he can’t see past his own inbred ideas of superiority, treating them with a paternal disappointment, certain that they are no match for American cavalry might (spoiler, they certainly are). Fonda however keeps Thursday human, a flawed, rigid man dropped into a role he is ill-suited to and struggling to adjust.

John Wayne offers an equally careful performance as York. Unlike Thursday, York adjusts his actions and decisions based on situations and personalities, rather than enforcement of rules. Army regulations can be respected but applied with sense. Meacham to him should be hounded out of town as the root cause of all the problems. Cochise, the Apache chief, he treats with respect and honour – abiding by deals and attempting to compromise with him to find a peaceful solution (a negotiation Thursday of course torpedoes with his arrogance and intransience). Wayne is often thought of as the action hero, but here Ford starts to explore his elder statesman quality, as well as his underlying decency and honour as an actor.

Other sub plots interweave neatly around this. John Agar’s young O’Rourke flirts with Thursday’s more liberal daughter (played brightly by Shirley Temple) – needless to say this relationship meets with no approval from Thursday. Thursday’s old colleague Sam Collingwood – now a time-serving captain at the Fort – is paralleled with him and York, as a time-server and mediocrity, a decent family man but lacking the will to do what he knows is right. Ward Bond provides both comedy and also a warm fatherly quality as Sgt Major O’Rourke, proud of his son and re-enforcing discipline on his (mostly Irish of course!) soldiers.

And of course the action is handled extremely well. A chase sequence with Apache, cavalry and a wagon (under-manned and out-gunned, because Thursday believes a few men and rounds of ammunition should be enough to see off the Apache) is filled with excitement. And, of course, the film builds towards the inevitable disaster Thursday’s rigid mismanagement was always heading towards: a suicide charge against a well defended Apache position, fighting to defend a corrupt agent who Thursday and York both know should be replaced.

It’s a film that quite daringly shows that American’s “mission” in the West was often founded on corrupt officials, and that the military leaders were sometimes rigid, incompetent martinets who led their men to avoidable disaster. It’s shame then that the York – and the film – chooses in a flash forward at the films end to promote the idea of Thursday’s charge being a glorious defeat, rather than an avoidable disaster. And that, this printing of the legend, is important to protect the “why we fight” idea of America. It’s the downside of Ford’s love of the past, of the mythology of the West, that even in the end of a film about incompetence, it’s still seen as noble and important to protect people from the truth and promote the legend, than tell the truth. But then for Ford, protecting the memory of the ordinary soldiers who died is the key – and if that means never questioning the how or why, well then that’s a price worth paying. It’s an idea we perhaps have far less sympathy with today.
Email ThisBlogThis!Share to TwitterShare to FacebookShare to Pinterest
Labels: Anna Lee, Dick Foran, Henry Fonda, John Agar, John Ford, John Wayne, Pedro Armendariz, Shirley Temple, Victor McLaglen, Ward Bond, Westerns