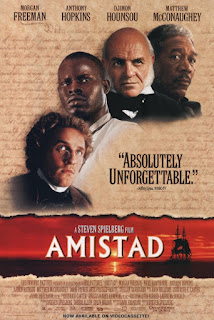 After the American Revolution, independence left one issue in America that would profoundly split the country: slavery. This was a land divided, between abolitionists and plantation owners, the more emancipation-minded North and slave states of the South. Slavery was – and remains – the ugly stain on the American soul. Steven Spielberg’s film uses a significant court case of its day to shine a light on these contrasting and conflicting priorities in American society throughout much of the early 19th century, that would eventually lead to civil war.

The film tells the true story of the slave revolt on the Spanish slaver ship Amistad. Here the slaves, led by Joseph Cinqué (Djimon Hounsou) escaped captivity, rose up and killed most of the crew (leaving just two men alive to sail the ship) and tried to return to their home in Sierra Leone. Arrested by an American naval ship while collecting fresh water, the slaves are transported to Connecticut where they find themselves on trial as escaped slaves, facing charges of piracy and murder. Their cause is taken up by Northern abolitionists Lewis Tappen (Stellan Skarsgård) and his black associate Theodore Joadson (Morgan Freeman), and their lawyer Roger Sherman Baldwin (Matthew McConaughey) a property lawyer. However, the case’s international implications for slavery attracts the concern of President Martin van Buren (Nigel Hawthorne), eager to support the prosecution, while former President John Quincy Adams (Anthony Hopkins), a lawyer and opponent of slavery, offers his advice to the defence.

Spielberg’s film has just the right balance of human interest and humanitarian concern to overcome its slight air of a civics lesson. Although largely a courtroom drama, what the film is really trying to do is capture in one moment the troubling contradiction of the land of the free built on slaves, and give a voice and empathy to the slaves themselves. 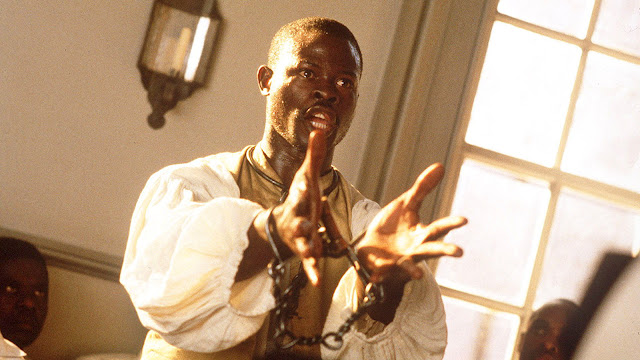 Although some have criticised this as a “white saviour” film, I feel that’s unfair. This is a film that starts and ends with Cinqué’s story and filters America through his perception. We can well understand why he rages at his lack of comprehension of laws that can be adjusted, court decisions overturned or how words can be twisted to take on other meanings. A film front and centred, say, by Matthew McConaughey’s Baldwin and focusing on journey from seeing this as just another case into a crusade would be a white saviour film. Instead the white characters drop in and out of the story as the narrative requires, and it’s the struggles and courage of the black characters that form the heart of the narrative.

Spielberg also brings to life the cruelty and inhumanity of slavery and what it does to all of us. The film opens with the confined, appalling conditions of the slave ship while Cinqué (with hands running with blood) tries to release a nail from the wood which he will use to free himself from his chains. The film intriguingly opens without the African characters being translated – giving us a sense of their isolation and perhaps also stressing how different they are from the Western “civilisation” that has taken them from their homes.

It isn’t until half way through the film, until a translator is found for Cinqué, that the film gives us the backstory that Cinqué has struggled to communicate. Spielberg spares no punches in showing the violence of abduction, the brutality and casual slaughter of the slavers, the starvations, the floggings that end in blood sprayed death, the cramped conditions practically designed to weed out the weak. A mother chooses drowning for herself and her child rather than life on the ship. Later the slavers chain unwanted slaves to a bag of rocks and cast them overboard to reduce their cargo load. If there was any doubt about the heart-rending evil behind slavery, it’s removed from your mind. 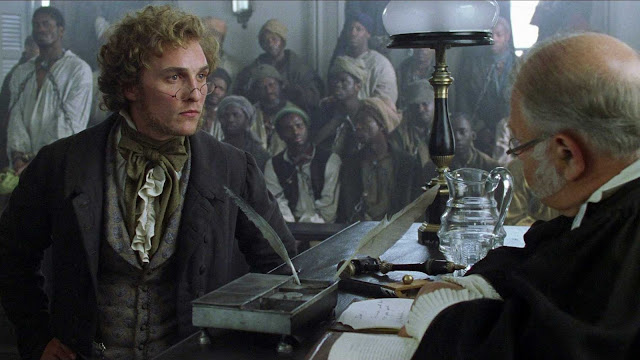 It also serves to hammer home the injustice of America’s own system. Under political pressure – van Buren is worried about the reaction of both Spain and the Southern States to the Africans being found innocent – the trial encounters interference and appeals every step of the way. It’s a system that prides itself on being the greatest in the world, but shows time and time again how it can be weighted against the weakest. The courtroom scenes – skilfully directed and played – show time and time lawyers valuing obscure property laws above right and wrong. And we are brought time and time again to the reactions and lack of understanding of the African characters, who come from a society where there is no equivocation and no words equivalent to “usually” or “perhaps”.

The film perhaps does take a little too long over its various legal machinations, and could do with losing a few minutes here and there. But that would be to sacrifice its many strengths. Looking wonderful, with a marvellous score by John Williams (riffing on the American pipes and African tribal influences), one of the strongest acting companies Spielberg ever assembled does outstanding work. Carrying much of the film is Djimon Hounsou, who makes Cinqué anything but a victim – he is a proud, defiant and intelligent man, humble enough about his qualities but quick to act to defend his rights. Uncowed but infuriated by the situation he finds himself in, he is never a passenger but at all times a key figure in his own liberation, even if his legal case must be fought by whites.

McConaughey enjoys himself under a bad wig, glasses and dirty teeth as the lawyer Baldwin, ambitious but with more than an air of decency. Postlethwaite is at his quietly authoritative best as his opposition counsel. Freeman lends the film a large part of his grace and dignity in a small, observant part of the freed-slave turned abolitionist, with Skarsgård more political as his white colleague. Hawthorne makes a van Buren a slightly flustered, impatient figure. Peter Firth demonstrates a great contempt for slavery behind an imperious exterior. 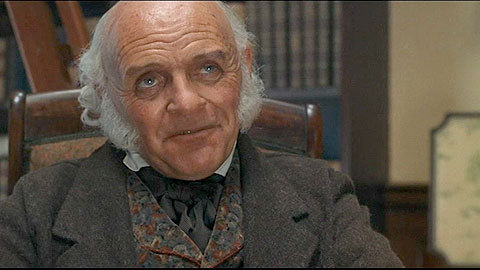 The film’s highlight performance though is Hopkins’ Oscar-nominated turn as John Quincy Adams. Adjusting his physicality to match the ageing ex-President, Hopkins captures his slightly nasal Massachusetts twang and adds a significant amount of twinkly charm and wry shrewdness to this adept political operator. A large chunk of the film’s final 20 minutes is given over to Hopkins, with the highlight a long monologue of Adams speech to the Supreme Court (in actuality a speech over eight hours in length!), that is a tour-de-force of skilled showmanship. It’s Hopkins’ last great performance of the 1990s.

Spielberg’s Amistad is a superb courtroom drama but also a heartfelt condemnation of the inhumanity man can show to man. It never forgets either that while this was a victory, it was only a skirmish not the war. While the film at times overplays the inevitability of Civil War (which did not exactly start over this issue), it skilfully shows the divide in the American culture between abolition and slavery – and how many felt for the first cause, but feared the supporters of the second so much they would rather not address it. Either way, Amistad may at times be a little dry – but that gives its moments of emotion even more force.
Email ThisBlogThis!Share to TwitterShare to FacebookShare to Pinterest
Labels: Anna Paquin, Anthony Hopkins, Chiwetel Ejiofor, Djimon Hounsou, Jeremy Northam, Matthew McConaughey, Morgan Freeman, Nigel Hawthorne, Pete Postlethwaite, Peter Firth, Stellan Skarsgård, Steven Spielberg