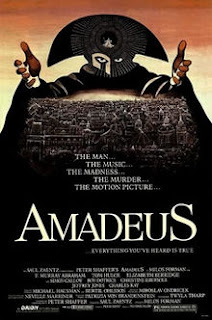 Peter Shaffer’s Amadeus was a smash hit play, both at the National Theatre and on Broadway. With such a delicious plot line – captured so beautifully in its tag line “The Man, the Music, the Madness, the Murder!” – is it any wonder that this fable about the life of Mozart, framed around the envy of his contemporary Antonio Salieri who, as an old man, claims to have murdered the great genius, was swiftly bought to the screen? Radically reworked and restructured by Peter Shaffer for the screen, Amadeus may stand as one of the few times where the script for the film is superior to the script for the stage. And the film itself is so carved out of radiance, that every single production of the play will forever live in its shadow.

As an old man Antonio Salieri (F. Murray Abraham) confesses to the murder of Wolfgang Amadeus Mozart (Tom Hulce). After a suicide attempt, he tells his tale to a young priest (Richard Frank). As a younger man, Salieri was the court composer to Emperor Joseph II (Jeffrey Jones). He has everything he dreamed of as a young man – fame, riches and a life of music – all of which fortune he sees as a sign from God. His world view is shaken with the arrival in Vienna of the young genius Mozart. A brilliant artist and composer, with a God-given gift for composition, Mozart is also everything the reserved Salieri is not – brash, rude, impulsive and a man of once-in-a-generation talent. How, Salieri wonders, could a man like him be given all the gifts, while Salieri’s music is merely competent? Salieri believes this is a cruel joke played on him by God – made worse by the realisation that alone in Vienna society, Salieri seems able to recognise the genius. Salieri decides to destroy this chosen child of God once and for all.

Shot on location in Prague – and Czech defector Milos Forman was treated as a returning hero when he bought the film there – Amadeus is perhaps one of the most strikingly beautiful films ever made. The cinematography is luscious, the production design – utilising every inch of the almost untouched-since-the-18th-century Prague settings (Thank God for Communist inefficiency Forman joked) – sinks you into the era completely while the costume design is striking, imaginative and excellent. The film is an opulent feast. But it is a million miles from being a staid period piece – instead this is something fresh, bold and modern.

Amadeus is perhaps one of my favourite films of all time. I just think it gets everything more or less right. Not least, capturing the idea of the passions and struggle of creativity. It’s clear why this story spoke so clearly to Hollywood, because no film captures as well as this one, the horrible plight of the competent journeymen, working every hour, while watching an effortless genius create masterpieces as easy as breathing. That’s the real tension here – and what makes us all empathise with Salieri, at least on some level. All of us have looked at the things we create – be it putting up a shelf to writing a play – and frustratingly seen our grasp exceed our reach, while seeing others do what we have so failed to achieve with frustrating ease.

Matched in with this, it’s a film that understands perhaps better than any other the burdensome process of creation. It’s easy for viewers to just remember the childish excess of Mozart – but Forman and Shaffer also show a dedicated and passionate worker. Hulce’s Mozart crouches over a billiard table, oblivious to the world around him while he composes (the soundtrack, as it often does, is flooded with the score he is composing, while his wife tries to get his attention – snapping to silence as soon as she succeeds). His dedication to his music is absolute – in his first scene, only hearing the orchestra starting to play his music before his arrival snaps him out of his raucously rude flirtatious banter with Constanze. Scenes of him conducting and directing rehearsals pinpoint his exactitude and perfection. Salieri as well is seen frequently labouring carefully and precisely over his work, while lacking the inspiration of Mozart.

It’s pinpointed with a beautiful late scene, where a bed-ridden Mozart dictates his Requiem score to Salieri. Mozart is electric, precise, his thinking fast-paced, complete, his passion for the score all-consuming – with poor Salieri desperately trying to keep up (“You go to fast” he frequently whines). It’s a scene that captures completely the intensity of mining creation. (Hulce apparently deliberately skipped lines during the scene, to add to Abraham’s confusion in the scene – with Abraham’s later agreement!). Its part of what the film beautifully captures, how being able to bring your ideas, perfectly formed, into the world is the most enchanting drug of all.

So you can see why Salieri grows too loath this blessed talent. In a wonderful moment – again perfectly utilising Forman’s decision to use the music as almost a character in the piece – he flicks through a portfolio of Mozart compositions, all of them first drafts devoid of any correction, the music playing in his head (and on the soundtrack) as he reads. It’s the sort of skill his diligent and slavish composition could never achieve.

It’s pinpointed even more in their first scene together, where Mozart arrives at Joseph’s court. The emperor plays a small welcoming march, composed by Salieri, which is fine. Mozart not only memorises the tune on first hearing it (“The rest is just the same?”) but then beautifully starts to play with it before suddenly turning it into an aria from The Marriage of Figaro, composing this beautiful piece on the spot. Nothing could be more devastating but to see your hack work improved in front of others into something genius – and the genius in question to be so oblivious of the impact, that he behaves like he’s done you a favour. No scene in the movies, I believe, has ever captured so completely this world of difference between the journeyman and the artist.

The film is crammed full of moments like this, all perfectly delivered by a perfectly chosen cast. The film was controversial at the time for using American actors – with their natural accents – rather than Brits (the “American accents jar the ear” whined Brit critic Leslie Halliwell). In fact it’s an inspired idea, that adds an air of modernity to the piece, but also principally opens the door to making the whole genre less stuffy (as if 18th century Venetians would speak with received pronunciation). The only characters who speak with English accents are the most upper-class, Italian-fixated, Opera purists. Everyone else – with even Simon Callow (the original stage Mozart, here in his film debut) adopting an accent – speaks with a Yank twang.

F. Murray Abraham beat out seemingly the whole Western acting world to land the leading role of Salieri. (In a backhanded compliment if ever I heard it, Forman suggested on meeting Abraham that he simply was Salieri). Abraham’s precise, detailed and beautifully judged performance – which allows gallons of resentment and self-pity to bubble under the surface of a tight self-control. He also has a wonderful spry lightness as his elder self, who has come to terms with his failures. It’s a brilliant role – and one Abraham struggled to match for decades to come.

Tom Hulce is equally superb as Mozart. I’ve talked a lot about how wonderfully the film – and Hulce – captures inspiration. But Hulce perfectly mixes this with a childlike vulnerability, an impulsive foolishness and sense of absurdity. His Mozart is frequently rude, obnoxious and interested only in a good time – frequently losing nights to drink, sleeping around with a crude sense of humour. But he’s also sweetly childlike, who needs to be looked after – Elizabeth Berridge (very good, a late replacement for Meg Tilly during shooting) as Constanze frequently has to mother him and manage his life and career. The rest of the cast are equally strong, from Jeffrey Jones’ studied normality as the Emperor, to Roy Dotrice’s firmness as Mozart’s disapproving father. 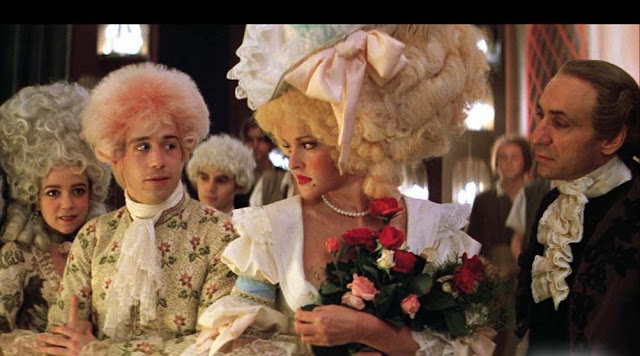 Amadeus brings this all together superbly – Forman’s direction is faultless – and mixes it together with Mozart’s music. Not a single piece of music is used twice in the film, and each quote from the music has been perfectly chosen to reflect the scene, from the film’s opening with Symphony #25 to its close with the Requiem. Sections from opera performances are shown – with the actors conducting (both learnt). The music soaks through the whole film – Shaffer and Forman believed it was the “third lead”. And it perfectly captures the tone and emotion every time, deepening and enriching the film itself.

Winning eight Oscars (including Picture, Director, Actor for Abraham and Screenplay), Amadeus is not only the best film ever made about classical music, it’s also one of the most fascinating and profoundly engaging films ever made about creativity. Does it matter that historically it’s all bunk? Not really at all, as a fictionalised exploration of how the average can be tormented by the extraordinary it’s perfect.
Email ThisBlogThis!Share to TwitterShare to FacebookShare to Pinterest
Labels: Best Picture, Biography, Christine Ebersole, Elizabeth Berridge, F. Murray Abraham, Jeffrey Jones, Milos Forman, Play adaptation, Roy Dotrice, Simon Callow, Tom Hulce