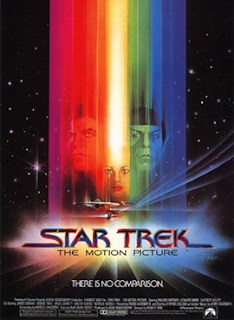 In the late 1970s the success of Star Wars meant every single studio was checking to find anything that could be turned into the next space-set mega-hit. Paramount’s eyes fell on a TV show that had been cancelled over ten years ago but had attracted a cult following. Hell it even had the word “Star” in the title! Quickly rejigging plans for a sequel TV series, instead Star Trek found itself heading towards the big screen. With a budget probably bigger than the amount spent making every single episode and two-time Oscar winning director Robert Wise calling the shots, what could go wrong?

Well as it transpires almost everything. Has there ever been a duller, flatter, less-engaging film that started a thirteen film franchise? Star Trek: The Motion Picture seems to have been made by people who looked at everything that made Star Wars a huge success and then decided “we ain’t going to do that!” Then they looked at everything that occasionally made the TV series self-important and hard to take seriously and said “We’re going to have some of that!” What we end up with a stupefyingly boring film that takes an immense amount of time to do almost nothing, with a story that might have made a passable 40 minutes of television into an empty and tedious two and a bit hours. Truly it was The Motionless Picture.

Anyway the plot, such as it was, features the now Admiral Kirk (William Shatner) taking back the reins of the newly revamped USS Enterprise to confront a giant cloud that is destroying everything it comes into contact with – and is on a direct course of Earth. Getting the old gang back together – including dragging Dr McCoy (DeForest Kelley) out of retirement and welcoming back Mr Spock (Leonard Nimoy), Kirk takes the place of the Enterprise’s new captain Willard Decker (Stephen Collins) and zooms out to encounter the cloud. What does the machine at the heart of this cloud want? Who is the mysterious creator that V’Ger wants to return to?

Where did it all go so wrong? The key problem lies with the script – and blame for that lies with Gene Roddenberry, Star Trek’s creator who took direct personal control of it. Determined that only he would control the Franchise’s future – after all it was his baby – Roddenberry rejected or minimised as much as possible many of the elements many of traditional film narratives (like villains, inter-personal conflict or the need for characters to ‘learn lessons’) for a science-fiction story he obviously felt dripped with importance. However, this shapeless machine like cloud searching for its “creator” tells us precisely nothing at all about the nature of faith or questions of identity. Because firstly V’Ger has no character and, secondly, the film takes so long to get this (almost three quarters of its running time) that there is no time to explore any of these themes anyway.

No parallels are drawn between the questions V’Ger is asking, and issues the core characters are dealing with. It makes for a big airey expanse of nothing. We learn nothing about our heroes personalities from this adventure, and they in turn are so little affected by it that at the end of the film they jet off to some new random adventure. A potentially interesting idea about progress and faith gets completely lost – despite ample opportunities to have built contrasts between V’Ger’s loss of faith and the barely-explored crises that Kirk (back in command after five years) and Spock (struggling to work out if he should purge all his emotions) are experiencing. Instead no comparisons are drawn, no insights are made and all three crises either peter out completely or utterly forgotten. It's part of the film's failure to really make us engage with any of these characters, or to find a reason to care about them - like Roddenberry felt investment was pandering. It's also The Emotionless Picture.

On top of which the film was obviously so thrilled with having the budget to include the sort of sweeping space vistas the show could only dream of, that a huge portion of the film was given over to watching these images draft past the screen. Slow, 2001-like pans across space vistas, around alien crafts and then through the trippy details of V’Ger’s inards clog up the film. But while Kubrick invested those with intense meaning, Wise makes them dull as ditchwater and as empty as light show. The bar is set early on with Kirk being given a long – almost four minute – silent shuttle tour around the exterior of the Enterprise. By the time the film is eating up almost ten minutes of the Enterprise flying through V’Ger, the actors have exhausted their “stare in wonder” faces and the audience are dozing off.

It’s not helped by the sub-par acting by all involved. Shatner and Nimoy give perhaps their worst, most lifeless performances in the history of the franchise. Perhaps they were caught between the mess of the script, the lifeless pace, the pressure of bringing these characters to the big screen – or perhaps the film just doesn’t give them anything interesting to do. Kelley gets a few moments of irascible charm, but the rest of the cast have barely got a few lines to rub together. Stephen Collins as Decker looks like he doesn’t really understand what he’s involved with, while Persis Khambatta looks more animated after her character has been lobotomised than she did intact.

The film drags on with a sonorous and stately pace, making no points at all and lacking any real thematic depth whatsoever. It’s not helped by Robert Wise’s lost direction. Wise prepared for making the 80th live-action entry into the franchise by watching precisely zero episodes of the show –and his utter lack of comprehension of what made the series popular in the first place perhaps explains why none of it made it into the film. There is no charm or wit here at all – everything is handled with such portentous importance it only draws attention to how little there is going on. 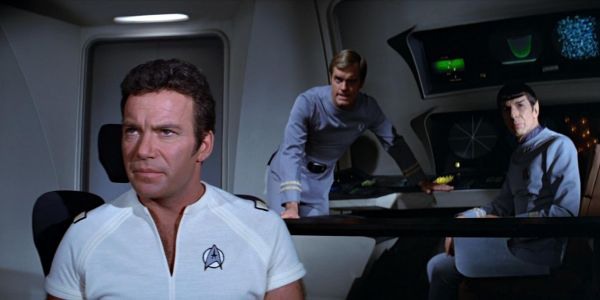 And it looks so bad as well. The overwhelming 1970s beige and muted colours that have been chosen for the new uniforms make it look as dull and disengaging as the words that are coming out of the actor’s mouths. It becomes even easier to notice the blandness of everything you are looking at that isn’t a matte special effect when you notice how full the script is with filler. Other a third of the film gone before the Enterprise leaves space dock. A tedious non-drama about problems going to warp (in a sequence of embarrassingly bad “slowed down” time disturbance as the ship falls into a wormhole). Almost two thirds gone before the crew make contact with V’Ger our nominal antagonist. A reveal about V’Ger’s origins and the identity of the creator that would have been shock only to people who had never seen an episode of the show before or had been living under a rock since about 1969.

There are precisely two good things about the movie. Firstly the music is superb – Jerry Goldsmith’s themes for the film (re-used for The Next Generation) and other bits of music, especially his martial Klingon music, is so perfect, so brilliant it was used in the franchise forever more. Secondly the opening sequence with the re-designed Klingons nailed a look, design and language for them that would also stick for the rest of time and the sequence itself is pretty exciting. Other than that, there is almost nothing to recommend the film.

As an advert for making someone want to watch any Star Trek ever again, it’s a disaster. Having gone way over budget, the series only returned due to loyal fans paying over the odds at the box-office. Roddenberry was dispatched from any future involvement, and the series bounced back with its best ever film with Star Trek II – which corrected all the script mistakes this one made.
Email ThisBlogThis!Share to TwitterShare to FacebookShare to Pinterest
Labels: DeForest Kelley, Leonard Nimoy, Robert Wise, Science fiction, Star Trek, Stephen Collins, Terrible Films, William Shatner