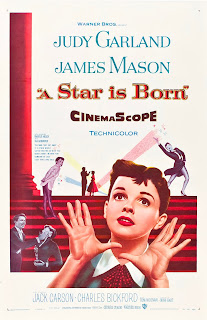 A Star is Born’s story had effectively been told twice already in Hollywood – once under the same title in 1937 and once before that as What Price Hollywood?, directed by none other than George Cukor. But Judy Garland’s husband Sid Luft saw the project was perfect for her. Luft thought the volatile Garland needed a director who could draw the best from her – and who better than Cukor, who worked with actors perhaps better than any other director in Hollywood. Cukor had been worried about repeating himself – but the chance to direct his first musical, first technicolour epic and work with Garland was too tempting.

The story is of course familiar. Esther Blodgett (Judy Garland) is an aspiring singer who – with quick thinking and performance nerves of steel – saves drunken Hollywood star Norman Maine (James Mason) from humiliation by involving him in a musical number at a charity event. When he sobers up, Maine goes to visit Esther to thank her – and is blown away when he hears her singing. Convinced she will be a major star, Maine arranges for a screen test with studio head Oliver Niles (Charles Bickford) and later pitches heavily for her to be considered as a last-minute replacement on the studio’s big new musical when the star drops out. Esther – or Vicki Lester as the studio renames her – becomes a major star when the film is a smash hit. But as her career goes up and up, Maine’s alcoholism and unreliability start to catch up with him and his own career hits the skids.

Cukor’s A Star is Born is a big, charming, impressive film that mixes emotional desperation with moments of joyous celebration. The film was not the box-office bomb it’s often believed to be (although it did do disappointing business) but, worried about its length, the studio cut the film several times during its release. The film we have today is a slightly neutered version, with several scenes reassembled by film historian Ronald Haver using audio, the odd clip and still photographs (it adds an impressionistic section of the film which you can’t imagine Cukor would have cared for) – but Haver did locate several missing musical numbers which add to the film’s impact.

Garland sings all the numbers, and some of her best work ever is in this film. Her late night bar rendition of The Man That Got Away (the performance that wins Norman’s heart) is superb. I love the affectionate spontaneity of Someone at Last, Esther’s recreation to amuse Norman of the sequence she has spent the day filming in the studio. This scene is playful, sweet, funny and has a freshness not all the numbers have.

Some of the other numbers go on too long – and it’s hard to escape the feeling that they are in there solely because of Garland and not because they serve the plot. Because this isn’t really a musical as such, more of a romantic tragedy with the odd tune, with each number a performance. It works superbly because Cukor’s sympathetic direction draws some of her best work from Garland – and a truly superb performance from Mason.

Cukor works particularly effectively with Garland who, in real life at this point, was far more similar to the destructive Maine (she delayed the film frequently with her absences and fluctuations in health). Garland is of course too old for the part – but it doesn’t really matter as she brings it such freshness, naturalness and emotional openness that you can persuade yourself that she’s a young ingénue at least ten years younger than she looks.

Garland was also surely helped by being paired opposite Mason. Not the first choice – that was Cary Grant – or indeed the second, Mason was hired as his professionalism and expertise could deal with Garland’s erraticism. Under Cukor’s direction he gives his finest work on screen here. His turns Maine into someone decent, charming, kind – but overwhelmingly self-destructive. His slightly slurred speech and ability to turn on a sixpence to anger makes for some of the best drunken acting you’ll ever see. But it works especially as we are desperate for Maine to kick the bottle. Because when he’s sober he’s the perfect husband and gentlemen. But Mason uses that to mine the deep tragedy of the character, his intense shame and self-loathing. The later sequences of drunken misbehaviour are heartbreaking (Maine’s drunken interjections at Esther’s Oscar-winning speech are almost unbearably painful to watch), and it’s all powered by Mason’s humanity in the role. It’s a truly great performance. 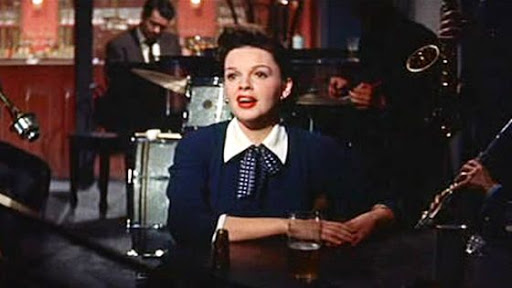 The film itself is perhaps a little slow and uneven around these performances. The musical numbers – whisper it – frequently slow the action down or grind the plot to a complete halt (none of them add anything to the story at all, and exist to showcase Garland). The film is so tightly focused on its two leads that it never develops any sub-plots to contrast with the main action. There is some light satire on Hollywood studios and their rapacious desire for more money – but not too heavy as the villain here is the odious press man (a weasly Jack Carson) while the studio head is a kindly, affectionate, fatherly figure who would never make a call based on business. The matter of fact way both stars have their names changed (the moment when Esther discovers Norman’s real name is a hilarious throwaway moment) is a neat gag. But the film takes a long time, frequently stopping for another Garland set-piece.

Perhaps the studio instincts were right that the film needed to be tighter – and some of the dialogue sequences reinserted by Haver hardly add much too the plot. Cukor’s direction is calm but assured though and the superb performances of the two leads make the film what it is. It looks fabulous with its technicolour depth, and it carries a genuine emotional force that pays off dramatically by the film’s conclusion. A Star is Born is uneven at times and overindulgent but it has more than enough going for it to reward the viewer.
Email ThisBlogThis!Share to TwitterShare to FacebookShare to Pinterest
Labels: Charles Bickford, George Cukor, Hollywood satire, Jack Carson, James Mason, Judy Garland, Musicals, Tommy Noonan