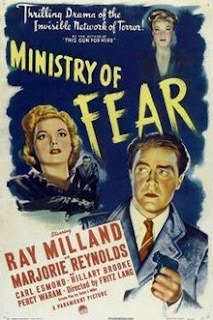 Neither Fritz Lang nor Graham Greene (the author of the original book) cared much for Ministry of Fear. Both of them thought that the film they ended up with was only a shadow of the original novel, with both of them largely blaming the script by Seton I Miller and the producers for turning Greene’s novel into a more simplistic B-movie. And yes the film is at heart just a B-movie, that races through a conspiracy thriller – and you’d have no idea that it ever came from Greene-land unless you were told so – but it’s put together with such professionalism that you admire its skill, even while it’s no Third Man.

At the height of the Blitz Stephen Neale (Ray Milland) is released from an asylum only to find himself immediately embroiled in a load of shady goings-on with suspicious séances, hidden microfilm and Nazi sympathisers. Can the fragile Stephen get to the heart of it?
Ministry of Fear has a slightly dream like quality to it – probably because it’s a fragmented narrative that makes quick jumps from event to event, sometimes with very few links between them. Stephen emerges from an asylum straight into a charity fete, hence to a train, the centre of London and a séance, with all the speed of a logic-skipping dream. Everything is swift and somewhat low in logic. The plot of the film becomes sheer B-movie fluff, with the typical spy hijinks you might expect, lacking any of the complexity of the book.

Greene was particularly disappointed by the deletion of the guilt Stephen feels around the death of his wife – and the film indeed skims over this very swiftly, leaving the reasons for Stephen’s being in an asylum in the first place largely unexplored and dispatched as swiftly from the film as possible. It’s not a film that has the time to explore the complexity of personalities of characters – instead it’s all about turning the content of the novel as much as possible into a high-flung spy thriller.

It’s why Lang was so disappointed with the script – and he became more and more dismissive of the film as he got older, claiming it to be bad film that he fell asleep in during a later showing – but he still bought to it a visual magic. The film is crammed with beautiful expressionistic images, present right at the start with Stephen watching a ticking pendulum through to some of its beautiful later images, in particular a shooting through a door that allows a beam of light to shine through a bullet hole in a door. Lang crams the film with striking images that help lift it above its B-movie roots.

Which is just as well because the general drift of the plot isn’t always that special, playing like the off-cuts from several Hitchcock films. Despite the artistry with which Lang presents it, he can’t hide the basically generic stuff that Greene’s book has been turned into. And its fast pace and logic jumps can perhaps find their root in the general contempt Lang had for the material he had to work with. Nothing in this feels particularly right – the England it presents is laughably wrong on several counts – while as always much of the mystery is reduced from the small cast list and tiny selection of possible suspects.

There are some good sequences, don’t get me wrong. A séance is beautifully made and carries a fair degree of tension. The final confrontation with the architect of the misdeeds makes for a decent scene. It’s just a shame it’s counterbalanced with clumsy “this is what’s going on” scenes, such as Stephen’s briefing from British Intelligence.

There are some good performances among the cast. Milland gives a well-judged performance of vulnerability, confusion and growing strength. He has just the right good-looking-but-not-drop-dead-handsome look to him to make him someone you can sympathise with but not completely trust (if the film hadn’t dropped some of the more interesting questions around Stephen’s guilt or innocence for past crimes this casting would have really worked to strengthen that). But he gives a fine performance. The array of suspicious characters around him are confidently performed, with Hillary Brooke a particular stand-out as a manipulative, seductive medium.

But Lang’s film is a covering of class and technique other soil that isn’t rich enough. The complexities of Greene has been lost and the film’s general plot and content doesn’t give much more than the sort of cheap thrills you could expect from a well-made B movie. With those involved this could have been more, but it never becomes a classic.
Email ThisBlogThis!Share to TwitterShare to FacebookShare to Pinterest
Labels: Alan Napier, Carl Esmond, Dan Duryea, Eskine Sanford, Fritz Lang, Hillary Brooke, Marjorie Reynolds, Percy Warum, Ray Milland, Spy thrillers