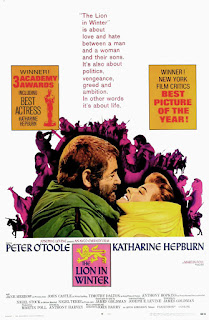 James Goldman’s play The Lion in Winter did solid but not spectacular business on Broadway. But when it came to film, it surfed a wave of popularity for stories about British history and became one of the most financially successful films of its year, winning three Oscars (including for Goldman). Even more than that, it went on to be West Wing President Jed Bartlett’s favourite movie of all time. I think we know which prize is the most treasured.

Christmas 1183 (including an ahistorical Christmas tree and gift wrapped presents and all) and Henry II (Peter O’Toole), king of England and huge chunks of France, wants nothing more than family around him to mark the occasion. Problem is, this is possibly the more dysfunctional family ever. His Queen Eleanor of Aquitaine (Katharine Hepburn) has been under “home arrest” for ten years in her castle, and his children Richard (Anthony Hopkins), Geoffrey (John Castle) and John (Nigel Terry) seem to take it in turns to conspire against their father, their allegiances shifting faster than even they can sometimes follow. For added complexity, Henry is living with his late eldest son’s intended Alais (Jane Merrow) as husband and wife and her half-brother the new King of France Philip II (Timothy Dalton) is joining the family for Christmas. Over one night, this family will fight, feud and change pacts and allegiances until hardly anyone knows where the games end and the hate begins.

Anthony Harvey’s film is a stately, often wordy, faithful reconstruction of Goldman’s script that gives front-and-centre to the often scintillating dialogue between the family members, that leans just the right side of ahistorical (sample line: “Hush dear, Mummy’s fighting”) but frequently allows it’s top-of-the-line cast to let rip on some glorious speeches and dialogue duets crammed with ideas, wordplay, character and wit. Harvey therefore basically decides to sit back as much as possible and allow the actors do the work, using a mixture of medium shots and close-ups to bring the focus as much as possible to the Broadway-style staging or into the actor’s faces. He also uses the strength of the performers to allow for a series of long takes as they burn through pages of Goldman’s dialogue. The fact that there is hardly an interesting shot in the film, and its visual language never matches it’s verbal fire is a shame, but a price the film thinks worth paying.

And it matters little when Harvey is able to work as well with actors as he does here. All the performers are at the top of their game. Katharine Hepburn (winning her fourth Oscar, in a tie with Barbra Streisand in Funny Girl) has the perfect level of acute intelligence and imperious arrogance for Eleanor. But Harvey encourages from her a softness at crucial moments, that in-between the barn-storming speeches and verbal putdowns, Hepburn finds moments of quiet sadness and loneliness – a sense that sometimes ten years of imprisonment means she has had enough of all this – that are some of her most affecting work on screen. She’s hilarious but deeply moving – and totally believable as one of the most powerful women of the middle ages.

She also is matched perfectly with O’Toole. Playing a 50-year old King at 35, O’Toole brings all the fire and charisma of his personality to the part, in a film where he perfectly balances the larger-than-life gusto of Henry II with his own personal disappointments, guilt and sorrow. O’Toole had already triumphed once as the charismatically brilliant king in Becket (for which he was also Oscar nominated, as he was here), but this performance is even better. Not only is his facility with the dialogue faultless, he also utterly convinces as the sort of awe-inspiring figure who dominates every room he’s in not just with force of character but the acuity and sharpness of his intellect. This might be his finest screen performance – and the one where he was most cheated of the Oscar (losing to a highly active campaign, criticised at the time, from Cliff Robertson in Charly).

To fill the cast out around these pros at the top of their game, Harvey raided British theatre to pluck some promising gems from British Theatre, more or less all of them here in their film debut. Anthony Hopkins is marvellously proud, forceful but just a few beats behind most of the others as a Richard who says what he means and sticks to it. Timothy Dalton is his polar opposite (and equally brilliant) as a Philip II who never says what he means and manipulates with a playful ease everyone he meets. John Castle (an actor who never had the career he should have had) is smugly unlikeable and coldly superior as the unliked middle-brother Geoffrey, while Nigel Terry is a snivelling punching bag as two-faced coward John. Jane Merrow is heartfelt and earnest as Alais, the only unquestionably kind and good person in this bunch.

These characters rotate sides and allegiances over the course of one evening, raging at each other like a medieval Who’s Afraid of Virginia Woolf? The brilliance of the dialogue never stops entertaining – although towards the end the film loses a bit of energy (it probably peaks with Henry’s loud double bluff of dragging the family in the middle of the night to a wedding he has no intention of seeing performed), perhaps partly because the film itself never really comes to flight as something cinematic. This is despite the decision to downplay the glamour – costumes are simple and look lived in (the cast wore them for hours off set to make them look lived in) and sets are far from pristine. It perhaps contributes to the slightly mundane feel of the filmmaking.

But the tricks are all in the dialogue and perhaps the film works best with an interval and a chance to take stock. There are several marvellous scenes, even if the constant feuding and side changing does wear you out after a while. But it’s a treat for the acting. Hepburn and O’Toole are simply at the top of their game, and the rest of the cast more than keep up with them. With an excellently imposing score from John Barry (also Oscar-winning), it’s a shame the film itself is a little too flatly and uninspiringly filmed with a murky lack of visual interest, but there are more than enough qualities for you to issue a pardon.
Email ThisBlogThis!Share to TwitterShare to FacebookShare to Pinterest
Labels: Anthony Harvey, Anthony Hopkins, John Castle, Katharine Hepburn, Nigel Stock, Nigel Terry, Peter O'Toole, Play adaptation, Timothy Dalton