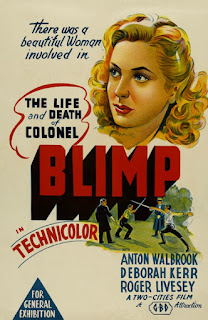 Is there a film that has better captured the curious state of being British than The Life and Death of Colonel Blimp? Could any other film makers than Powell and Pressburger take a doltish buffoon from newspaper comic strip, and turn him into a tragi-comic figure worth of Hamlet? Could any other film make a wartime propaganda film that features the most sympathetic depiction of the Germans anyone would see for decades to come? Winston Churchill was so scathing of the film that its US release was delayed for two years – and even then it was cut to ribbons. But then, I guess we knew already the guy wasn’t right about everything.

During the Blitz, Clive Candy (Roger Livesey) is a retired Major-General and now a senior commander in the Home Guard. Ambushed in a Turkish bath on the eve of a training exercise (by young officers keen to follow the German example of effective pre-emptive strikes), Candy rages at their dismissal of him as a relic from yesteryear. In flashback, we see Candy’s entire life over the course of the rest of the film. The film charts his military cross, from the Boer War to World War One and his life-long friendship with German officer Theo Kretschar-Schuldorff (Anton Walbrook), after both men are hospitalised after a 1902 duel over insults to the German military. Both men fall in love with the same woman, Edith Hunter (Deborah Kerr) although Clive realises it far too late – and their friendship ebbs and flows over the next forty years.

Powell and Pressburger’s film is, of course, quite beautifully made. The film has that distinctively radiant technicolour look of their most successful works, but it works so well because Powell assembles the whole so wonderfully. Powell knows when to hold a shot and when to look away and his judgement is never wrong. In the duel where Clive and Theo meet (Theo has been randomly selected to fight), the camera at first covers the detail of the prep, then moves to an over-the-head shot as it begins, before pulling out of the gymnasium and away, gliding into a long shot with Berlin sprinkled with snow. Because after all, the actual fight is immaterial to the sense of this being one event in the tapestry of life – and the moment of real importance being the friendship that came from it.

Then, much later, Powell does the exact opposite, holding a shot with powerful, emotional, simplicity. It’s 1939 and Theo is trying to remain in England – his wife having passed away, his sons being lost to Nazism and this adopted country being far closer to his old Prussian ideals of duty and fairplay. In a heartbreakingly low-key, simple speech – just exquisitely delivered by Anton Walbrook – Powell lets the entire speech play out in a single take, giving the moment room to breathe and magnifying its impact enormously – not least by the background extra who switches from shuffling his papers to listening intently to this heartfelt appeal.

It’s this mastery of technique that makes the impact of the film so wonderful – and helps it to masterfully capture the changing of an entire nation. Other the film’s forty years the entire world changes utterly, from one of simple truths where right is right and evils are punished, to the morally complex world of World War Two, where bending the rules and playing dirty might be just what is needed to defeat enemies with no principles.

Candy is a man of unshakeable morals and ideals, who does not believe ends justify means and is determined that fighting honourably for defeat is far better than victory at all costs. It’s an idea the film affectionately praises, at the same time it sadly shakes its head and admits that such ideals were for the last century not this one. These are ideas Theo has captured far sooner than Candy – and Candy’s tragedy, among his many virtues, is that he always fails until it is almost too late to understand the truth of the world around him (be that politically or romantically).

It doesn’t matter really though, because we always know Candy’s heart is in the right place. In a sublime performance by Roger Livesey, this is a man with an upper-class bombast and a paternalistic regard for his duty and for others. His country and the ideals of that country come first and foremost – but it’s not about pushing those home. He will console honourable foes – as he does with Theo after World War One – and when the battle is over will be the first to say by-gones are by-gones. The film he is in a way a somewhat ridiculously old-fashioned character – but he’s always well-meaning, decent and honourable. 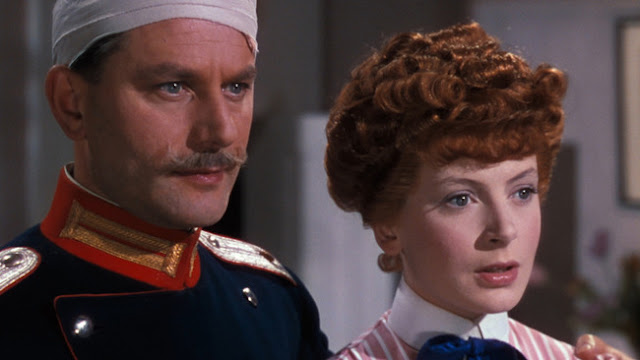 Candy also has the tragedy tinged sadness of not knowing what he wants until it’s too late. He doesn’t realise his affections for Edith Hunter, until she and Theo are telling him of their engagement (although we the audience are already well aware that Edith had feelings for him), and the look of realisation of a deep and lasting love that will last his whole life, is fabulously conveyed by Livesey in a perfect reaction shot. Candy will eventually marry Edith’s near doppelganger, but this unspoken love will last his whole life – and form another bond between him and Theo. Which in itself is what we like to think is a quality the British have at their best.

Along with that British fair-play that is so important to him, it also settles in the friendship between Theo and Clive. A friendship unaffected by tragedy or war (or at least not for long) and which, despite years apart, Clive frequently returns to with all the warmth and openness they first shared. These are bonds of loyalty forged on the playing fields, that operate on unspoken feelings (for a portion of their friendship Theo can’t even speak English).

These are also the ideas and principles that Clive keeps alive in himself, even while the world becomes ever more bleak around him. He’s a character that never loses his essential positivity and kindness. Deaths or disappointed love are met with regret and then losing yourself in sport (whole years are hilariously shown to pass by montages showing Clive’s hunting trophies appear on walls). But always that British idea of (as Churchill put it) “keep buggering on”, and not letting infinite sadnesses and disappointments undermine or define you.

Powell and Pressburger use all this to make Candy not a joke – as the Lieutenant in the film’s prologue sees him – but as a deeply sympathetic and real man. It’s a film also about our disregard for the old, our failure to ever imagine that they were young. The flashback structure fills in this story beautifully. All this, and it’s not even to mention Deborah Kerr’s superb performance as all three of the women in this story, each subtle commentaries on the other and her return throughout somehow representing the perfect ideals that Clive and Theo are living to. The Life and Death of Colonel Blimp is about understanding how the “rules” of British behaviour are underpinned by a deeper sadness it’s almost a duty to hide – and it understands that better than almost any other film.
Email ThisBlogThis!Share to TwitterShare to FacebookShare to Pinterest
Labels: Anton Walbrook, British Films, Deborah Kerr, Emeric Pressburger, John Laurie, Michael Powell, Roger Livesey, Roland Culver, Ursula Jeans, War film