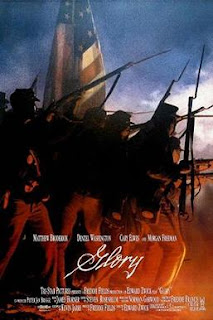 The American Civil War started over slavery, but it took a long time for either side to admit it was a fight about slavery. Racism abounded on both sides, and it was a fight in which black Americans may have been the subject, but were rarely invited to join. Glory covers this point of history, and specifically the first all-black regiment and its struggle to be recognised as equal to the other regiments in the army.

Wounded at the Battle of Antietam in September 1862, Robert Gould Shaw (Matthew Broderick) returns home to Massachusetts and accepts command of the first all-black regiment, which is currently being raised by abolitionists in the state. With his friend Cabot Forbes (Cary Elwes) as second-in-command (no one was progressive enough to actually allow black officers for the regiment), he recruits a wide range of black Americans, from free-man and bookish intellectual Thomas Searles (Andre Braugher) – an old friend of Robert and Cabot – to former slaves such as the wise John Rawlins (Morgan Freeman) and the resentful Silas Trip (Denzel Washington). Training is a struggle, with the army denying the regiment supplies and support, and it’s an equal struggle when they reach the front line to be recognised for duties other than looting and latrine digging. Will the Massachusetts 54th be given the chance to prove itself in the front line – and establish a black man can fight as hard and bravely as a white man can?

Edward Zwick’s beautifully filmed, carefully re-created historical epic set the tone for much of his future career. It’s an often overly-sentimental film straining for a very self-conscious sense of importance, weighed down by the pride at the “message” it is carrying. It often does hit the mark with presenting scenes that carry emotional force – but then seeing as it treats nearly every scene as being a “moment” that should move us (with James Horner’s choral manipulation working double time to get us experiencing feelings), it’s no wonder that it succeeds sometimes.

Which is not to say the message it presents isn’t an important one. Black Americans have often been pushed into the margins of American Civil War history. Or worst of all presented as the victims, reliant on the courage and bravery of the abolitionists of the North to save them from slavery in the South. Until Glory it was very rare for anything to push their stories front and centre – or to tell a story where former slaves were allowed to fight their own battles and choose their own destinies.

It’s one of the strongest marks of the film: these are soldiers unlike any other, who enter battles with less concern about their own survival, and more about having the chance to live as freemen and to make a mark on the world. To show that they, and people like them, could do just as a white man could do. And if they had to die to do that, better to live a day on their feet as freemen then a lifetime on their knees. It’s the principle emotional message of the film, and something Zwick translates with some skill, even if he frequently overeggs the pudding while doing so.

However, with such a strong message, it’s a shame so much of the film is filtered through the experience of its white lead character. For many of the films of the 80s and 90s dealing with these issues – Cry Freedom, the Steve Biko biopic, with Biko as a supporting character to his white South African journalist friend, being perhaps the key example – it was essential to have a white man at the centre, as if worried that audiences couldn’t understand the story they were seeing unless they had it filtered through the perception of someone who looks a bit more like them. 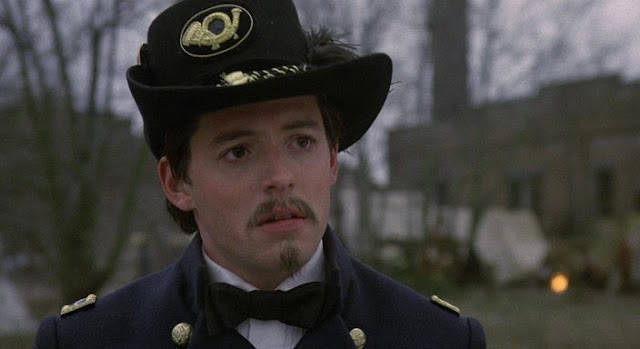 Matthew Broderick takes on the lead role here of Shaw – with the film giving a significant slice of its running time to its coming-of-age theme of Shaw learning to become a leader of men – and while the character is meant to be callow and an unlikely Colonel, it doesn’t help that Broderick lacks the charisma for the part. Perhaps he is a little too lightweight an actor for such an enterprise, for a film that demands greater force of character (you can imagine Tom Cruise doing a much finer job in the role).  Similarly, the familiar beats of a young man learning how to lead feel trivial compared to the life-and-death issues facing his soldiers.

But too often Zwick’s film returns us to Shaw’s point-of-view, the narrative filtering so much of the action through his perceptions and decisions that the black soldiers become supporting actors in their own stories. Broderick is not helped by the soldiers being played by some of the finest American actors of the last 30 years. Braugher is fabulous in the thankless role of the bookish man who must grow a spine. Morgan Freeman established a persona – the wise and level headed older man, who will not let hate and fury define his life and his choices – that would last him for the rest of his career, and is superb (his Oscar nomination for Driving Miss Daisy is probably the only thing that led to him not getting a nod for this film).

Denzel Washington took home an Oscar as the bitter, angry Trip – and it’s the sort of role an actor seizes with relish. Washington fills every frame with his rage at the system, his inarticulate, indiscriminate anger lashing out in every direction. It’s the fury of a man who has had all his choices taken from him in life, and would rather destroy things than run the risk of allowing himself to become committed to something, or form a bond. Washington probably won the Oscar alone for the astonishing scene where he silently, defiantly accepts a whipping (on a body covered with scars) for missing a curfew. He’s an elemental force of nature in the film.

There is plenty of strong stuff in Zwick’s work, but the film itself overplays its hand frequently. Moments of emotion are played so heavily to the hilt they sometimes fail to have an impact. It wants you to know at every turn that you are watching a film with an important social message – and the speechifying at points put into the mouths of the characters runs dry. While superbly made – veteran photographer Freddie Francis’ work is beautiful (and Oscar winning) – it’s a heavy-handed, overly pleased with itself film that knows all too well that it is about an important subject. While sometimes it lands – often in quieter moments, particularly those where Freeman and Washington are allowed to simply be human without overindulgent music cues hammering home the emotions – at others it comes across as too much.
Email ThisBlogThis!Share to TwitterShare to FacebookShare to Pinterest
Labels: American Civil War, Andre Braugher, Bob Gunton, Cary Elwes, Denzel Washington, Edward Zwick, Historical epics, Jay O Sanders, Matthew Broderick, Morgan Freeman, War film