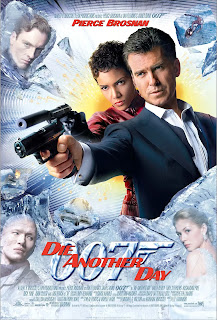 Die Another Day was the highest grossing Bond film ever released. So why was it almost four years before another one was made? Put simply, because this one weren’t no bloody good. Released at the Bond series’ 40th anniversary, Die Another Day was meant to be a celebration of everything Bond – instead it’s like the final nail in the coffin of an entire lifecycle in the franchise that started probably around the early Roger Moore films. When Bond came back out after this, he was radically different.

James Bond (Pierce Brosnan) is sent undercover to Korea to take out renegade Korean Colonel Moon (Will Yun Lee). The mission is a success – but Bond is betrayed and captured by the North Koreans. Coming out of Korean prison a year later, Bond is no longer wanted by MI6. So he goes off on his own to find out who betrayed him – and finds newly emerged diamond businessman Gustav Graves (Toby Stephens) might have something to do with it. With a trail that starts in Hong Kong and heads to Cuba, the UK, Iceland and back to Korea he’ll work alongside CIA agent Jinx Johnson (Halle Berry) to find out how this all ties together and get his revenge.

So Die Another Day starts a bit like a Connery Bond – and about half way through it segues into being perhaps the most ridiculously overblown Roger Moore-esque Bond you’ll ever see. I suppose you could say this was the scriptwriters trying to capture the essence of 40 years in one movie. But actually it’s probably just incoherent scriptwriting and stupid storytelling. It starts trying to be grounded – Bond is captured and tortured for a year! – but then shrugs off any aftereffects of this year of hell with lackadaisical ease before throwing us into the sort of “Ice palace! Invisible cars! A weapon that channels the power of the sun!” malarkey that even Roger might have thought was a little bit too much.

It’s not helped by the fact that the entire film is so shoddily put together and so lazy in its execution. The one liners in this film are terrible – there are no double entendres in this film only single entrendres (words like thrust, pleasure, weapon and mouthful are used with gleeful abandon) – and far from being a playful exercise in Bond’s cheekiness are just hand-in-the-mouth embarrassing. But that’s almost as nothing compared to the woeful special effects. Even in 2002, nothing in this film looked real. I hardly know where to start with the awful plasticky sheen of the effects here. The film opens with Bond and fellow agents surfing (!) into a deserted island – at the end of which Brosnan in front of blatant blue screen rips off his mask to show it-was-definitely-him. As if that wasn’t bad enough (Bond surfs? I’m out!) Bond surfs AGAIN in the movie halfway through, using a parachute as a sail to escape possibly the least convincing wave ever put onto film. It really has to be seen to be believed (or rather not believed). That’s not to mention the wonky overblown final plane sequence, or a laughably unrealistic looking Jinx dive from a cliff down into the water below.

Brosnan probably tries his best in all this, but even he can’t save this total mess. How does a film that started with Bond in prison and emerging damaged and on a gritty quest for revenge end with a villain wearing a robot suit controlling the sun? The script after the first 15 minutes gives Brosnan nothing to play with. The film loses all interest in the traitor plotline about halfway through, and when she is unmasked (in a twist that surprises no one at all) Bond barely seems to care. Pierce himself looks frankly too old and a little out of shape (his running in this film with his arms pumping up to his face looks terrible), something only magnified by the youth of his co-stars. 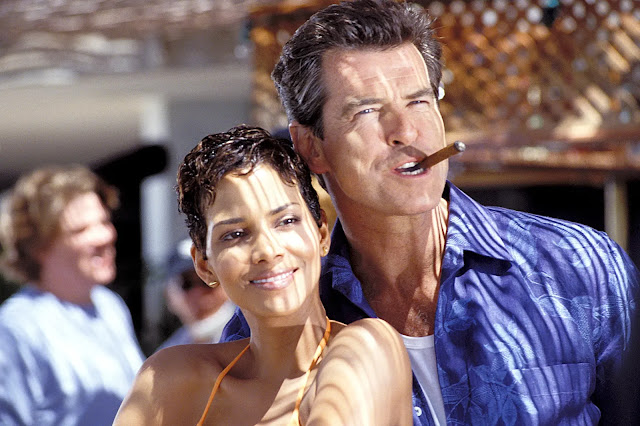 Not that I’m saying his co-stars are any good either. When this film came out there was a brief flurry of excitement that Halle Berry’s Jinx would be worth a franchise of her own. That died shortly after the film came out – this is a character that acts tough when needed, but still needs to be saved twice in quick succession by Bond, who says faux-tough things like “Yo Mama!” but has barely two personality facets to rub together. Berry simply does her bit and meets the requirement of looking sexy and fighting. Mind you she still fares better than an embarrassing Toby Stephens, whose villain is so paper-thin the actor seems to have taken the bizarre decision to channel Alan Partridge. Rosamund Pike’s fencing MI5 agent barely registers.

Needless to say Bond beds her – as he beds all the women in this with a perfunctory inevitability that fits the box-ticking exercise of the whole film. The film is littered with references to past Bond films, although that is probably only going to make you want to watch almost any of the other films instead. Perhaps to try and up the ante and make this one “even biggerer and betterer than before” there are more gadgets than ever before. These are topped with the crowning turd of the invisible car, a nadir for the franchise, a senseless advantage (Bond at one point follows directly behind two walking heavies in the car – it’s invisible NOT silent for goodness sake!) and something so overblown that however much the producers at the time tried to justify it by pointing at military technology just sounds silly. Don't get met started on the bizarre VR training sequence Bond carries out (later replayed for a grotesquely demeaning Moneypenny joke that made me feel sorry for Samantha Bond).

But then the whole thing basically sounds silly. Giving the villain a huge ice palace lair might have seemed like a cheeky nod, but again it just looks absurd and the producers desperately trying to find a location that hasn’t been used before. The entire film feels like a rushed attempt to get something out for the 40th anniversary (perhaps the rush helps explain the insane product placement, leading to the film being nicknamed Buy Another Day). The script has been assembled from the off-cuts of other Bond films. There are no fresh ideas at all and everything that happens in the film has the air of “well this sort of thing happens in Bond films”. The script and special effects feel half finished. Rather than a tribute to how Bond was done in the past, it feels like a tombstone. Here lies James Bond c. 1967-2002. No wonder under Daniel Craig he needed to be reborn as someone who felt vaguely in touch with something approaching reality.
Email ThisBlogThis!Share to TwitterShare to FacebookShare to Pinterest
Labels: Colin Salmon, Halle Berry, James Bond, John Cleese, Judi Dench, Lee Tamahori, Madonna, Pierce Brosnan, Rick Yune, Rosamund Pike, Terrible Films, Toby Stephens, Will Yun Lee