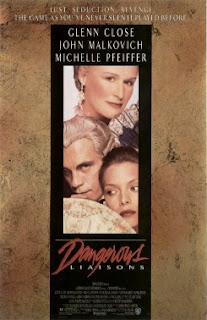 Christopher Hampton’s adaptation of Pierre Choderlos de Laclos Les liaisons Dangereuses had been a stunning success in the West End and on Broadway – so a film adaptation of this lusciously set story of sex was inevitable. Stephen Frears’ film keeps the story grounded in its setting of pre-Revolutionary France, but deliberately encourages a modern looseness, even archness, from its actors that makes it feel grounded and modern.

The Marquise du Merteuil (Glenn Close) and Vicomte de Valmont (John Malkovich) are two French aristocrats who fill their time with seductions and sexual manipulation of other people, while conducting a dance of attraction around each other. Du Mertuil wants revenge against her ex-lover by getting Valmont to seduce the lover’s innocent intended bride Cécile de Volanges (Uma Thurman). But Valmont is more interested in setting himself the challenge of seducing the unimpeachable Madame du Tourvel (Michelle Pfeiffer) – du Merteuil so convinced the task will be impossible that she bets him if he seduces du Tourvel, she will sleep with him as well. These games of sexual manipulation develop with disastrous consequences for all involved, as unexpectedly real emotions of love and affection intrude on the heartlessness and contempt.

Frears’ film won three Oscars for its most striking elements: production design, costumes and Hampton’s script. Hampton’s script provides a series of striking scenes and tongue-lashing dialogue for its stars. Meanwhile the film looks marvellous, it’s use of French locations superb in creating the world of decadence that these characters move in, while the costumes are so strikingly, elaborately intricate they practically become characters themselves. The film opens and closes with scenes of dressing and de-dressing: the opening sequence shows Merteuil and Valmont being dressed in their elaborate finery, a sequence uncannily reminiscent of knights being dressed for war, ending with shots of their defiantly cold faces starring down the lens. The film bookends this with the film’s key survivor, brokenly wiping away from their made-up “public face” probably forever. It’s a film that uses the intricacy of the period, to strongly suggest modern, dynamic tones and emotions.

The film is shot with a series of tight shots, intermixed with the odd long shot, that is designed to bring us in close with the film’s serial seductions and envy-powered clashes. This brings us straight into the middle of the events, giving them an immediacy and suddenness that makes this feel like anything but a traditional costume drama. Seductions have a steamy immediacy, while the growing moments of tension in the relationship between Mertuil and Valmont is similarly bought in close to us, to allow us to see the mix of emotions these two have for each other – both a deeply, unexpressed, love and a strange sense of loathing linked together with a possessive jealousy.

Frears makes marvellous use of mirrors in the film. These reflective surfaces appear in multiple shots and frequently expand the world, mirrors reflecting characters as others discuss them, or forcing into shot (usually between two other characters) the subject of conversations. They reveal (to the viewers) eavesdroppers hiding and, in one striking shot, as Valmont and Mertuil’s latest lover argue she is framed in reflection hanging above them on the wall mirror. There’s a reason why one of the film’s final sequences revolves around the smashing of a mirror in grief.

The film’s modernism also stems from its use of very modern American actors – apeing the success of Milos Forman’s Amadeus – with everyone using their own accents. Glenn Close is superb as Mertueil, a woman projecting a cold, manipulative authority but does so to suppress and hide her own emotional vulnerability. Mertueil has convinced herself that she is a champion of her sex, but her every action seems to be motivated by finding indiscriminate revenge on all those who have found the sort of happiness she has been denied (or denied herself). Close lets little moments – wonderfully captured by the intimacy of Frears’ camerawork – where moments of micro-emotions and pain flash briefly across her face, only to be wiped away. 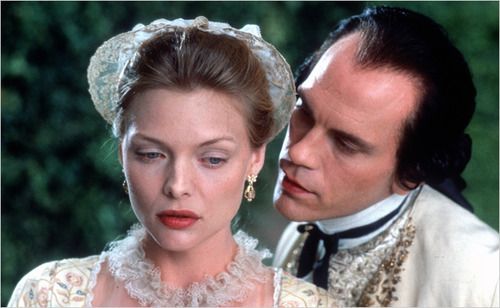 Malkovich is an unusual choice as Valmont – and his serpentine swagger and arch mannered style at first feels quite a disconnect with a character renowned as the most successful lover in France. But Malkovich’s eccentricity, his very oddity, in a way makes him believable as a man women would find intriguingly irresistible. Malkovich, while naturally perfect for the coldness of the character, is also highly skilled at expressing the slow, non-continuous growth of conscience and feeling in Valmont, as his feelings for Tourvel dance an uncertain line between manipulation and genuine feeling – and while his confused feelings for Mertuil alternate from possessive devotion to revulsion.

The whole cast respond well to Frears guidance, and his ability to draw relaxed performances from an odd selection of actors. Michelle Pfeiffer is particularly fine in a role that on paper could be very dull – the perfect, kind woman – but which she invest with such a seam of emotional truth and longing for deeper connections, combined with naked emotional honesty that she becomes the most compelling character in the film. Uma Thuman is very good as a naïve young girl, Kurtz and Natwick suitably arch as society bigwigs, Peter Capaldi creepily willing as a manipulative servant and even Keanu Reeves has a certain sweetness about him, even if he is at the height of his “Woah” dudeness.

The film’s principle problem is perhaps the very archness and coldness that makes it affecting. While it’s intriguing and intelligent, it is never perhaps as engaging as it should be and its characters are so jet-black, deceitful and cruel that it becomes hard at points to really invest in this chilling story of unpleasant people using other unpleasant people and manipulating innocent ones. It becomes a film easier to admire, perhaps carrying too much of the freezing chill of imperial French greed and selfishness. Come the denoument for all the skill it is played with the actors, it is hard to feel your emotions invested or your heart moved by any of the fates of the characters. Perhaps, in presenting a heartless world of selfishness and lies, it does its job too well.
Email ThisBlogThis!Share to TwitterShare to FacebookShare to Pinterest
Labels: Costume drama, Glenn Close, John Malkovich, Keanu Reeves, Literary adaptations, Michelle Pfeiffer, Mildred Natwick, Peter Capaldi, Stephen Frears, Swoosie Kurtz, Uma Thurman