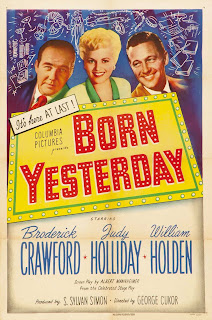 Perhaps George Bernard Shaw should have tried to copyright the Pygmalion concept. After all no end of films and plays have tried their best to replicate the magic of having one working class classless type (usually the woman) learning how to use their own natural intelligence effectively by a wiser tutor (usually the man). Born Yesterday is a near text-book example of this – she’s as ill-informed as a young baby so might as well have been “born yesterday” y’see – that offers very little in the way of surprises, but a lot in the way of charm – most particularly from Judy Holliday who carries the entire the film with aplomb.

Harry Brock (Broderick Crawford) is a corrupt, uneducated businessman who has arrived in Washington to buy up a few congressmen. Brock may be a boreish bully, but he’s worried that his mistress, former Chorus-girl Billie Dawn (Judy Holliday), is so brash and ill-educated that she will show him up in front of his new political contacts. So he hires investigative journalist Paul Verrall (William Holden) to educate her. But Paul and Billie have an immediate romantic frisson – and as she learns about politics, literature and the state of the world Billie starts to realise that maybe all those shares she holds in her own name (for tax purposes) in Brock’s dodgy dealings might give her the chance to put his wrongs right.

Born Yesterday was an adaptation of Broadway hit that had made Judy Holliday a star. Written by Garson Kanin, bullying Harry Brock was allegedly based on Colombia Pictures head Harry Cohn. He clearly didn’t care when he smelt a hit – and even confirmed some suspicions by ordering Kanin to do re-writes of the rewritten script for no extra payment. Cohn had been deeply uncertain about bringing the unknown Holliday along for the ride (she had made only three small appearances beforehand) so Cukor cast her in a key role in Adam’s Rib (where Hepburn generously ceded many scenes to her) to prove Holliday could make it on the big screen.

Thank goodness she did make it to the film, as Holliday makes the film. Winning the Oscar – famously beating Bette Davis and Anne Baxter in All About Eve and Gloria Swanson in Sunset Boulevard – Holliday is superb in the role. Billie Dawn may be brassy, may be load, she might have the sort of screeching Brooklyn accent that sometimes feels like nails on a blackboard – but she’s not dumb. She’s smart – as she shows by repeatedly beating Harry with ease at games of gin rummy – she’s capable and she cares. She just hasn’t learned any better, and having spent her life being told that her opinions don’t matter, she’s decided to not mention them.

But Holliday shows Billie is a woman fast – and eager to learn – and a week or so with Paul won’t turn her into a genius, but she’s more than sharp enough to work out what’s wrong about her life and her sugar daddy, and to give her the oomph to do something about it. Holliday demonstrates this endearing growth of engagement and curiosity with a superb lightness – her comic timing is faultless – and a touching sweetness.

The script gives Billie a hilarious tendency towards malapropism and her wide-eyed innocence and desire to do her best works wonderfully in getting us onside. While she is often the source of jokes she is never the butt of them, and Holliday makes clear her decency and sharpness is innate. She’s far from a dumb blonde – although she certainly looks and sounds like it – and watching her apply good-old fashioned Hollywood liberal ideas to confound boreish businessmen is good fun.

Her co-stars give sterling performances. Broderick Crawford channels his Oscar winning turn from the year earlier as corrupt bullying Willie Stark in All the King’s Men as the loud, bullying and dim Harry Brock. Throw-away lines suggest he has killed in the past – and at one point he strikes Billie – but he’s always a comic blusterer rather than a real threat. William Holden generously cedes much of the ground to Holliday as her Henry Higgins, although unlike that guy he’s humble, supportive and pleasingly democratic (quite the year for Holden, having also played a similar supplicant role in Sunset Boulvard).

Cukor directs with his usual lack of flash, quietly setting the camera in place and letting the actor’s go about their business meaning, for all the location shooting in Washington, this still feels very much like a Broadway piece. Cukor does skilfully manage to smuggle a lot under the censor wire – not least that Billie is clearly Harry’s mistress – and keeps a fine romantic tension between Billie and Paul, even if having the pair of them kiss early on does undermine some of the “will-they-won’t-they” magic.

But then basically this is a very straight forward film that just looks to entertain. There are some dirty dealings in Washington – but it’s all sorted out very easily and we are reassuringly told that there are only a very few bad apples in this barrel, and we can trust in the decency of our leaders. It’s no surprise who ends up with who, and no real revelations in character. The most surprising character in many ways is Harry’s disillusioned, self-loathing lawyer played by Howard St John, constantly on the verge of alcoholic self-disgust.

The film is really a showcase for its star though – and Holliday delivers with a terrifically entertaining performance that hammers home even more the sad fact that she passed away at 43 with only a handful of films to her name. Pygmalion Goes to Washington it maybe, but this is still a lovely epitaph to a talented actress.
Email ThisBlogThis!Share to TwitterShare to FacebookShare to Pinterest
Labels: Broderick Crawford, George Cukor, Howard St John, Judy Holliday, Play adaptation, William Holden