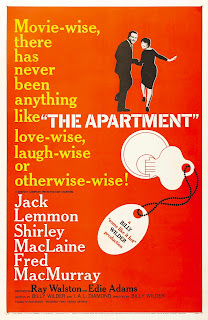 How do you get ahead in business (without really trying)? Well a good way of going about it might be just farming your New York apartment out so your bosses can take ladies who aren’t their wives there. It works for CC Baxter (Jack Lemmon) – known to all his superiors as “Buddy” – who makes his apartment freely available on rotation to a host of executives as bolt holes for their mistresses. Just arrange a start and finish time, pick up the key from under the mat, and Baxter will keep out of the way. However, things get complex for Baxter when the Head of Personnel, Sheldrake (Fred MacMurray), demands exclusive use of the apartment – and when it turns out his mistress is none other than Fran Kubelik (Shirley MacLaine), the lift attendant Baxter himself has fallen in love with.

The Apartment is a brilliant mix of bitter social satire and comedy. It’s striking that the film is remembered as a sort of dark romantic comedy, as I think I’d be hard pressed to think of a film with as bitter a view of America and its values. Baxter and Kubelik make for a sweet couple (eventually) but the pair of them are in awe of the American dream. This working dream is however a complete fake, one in which the rich and powerful take what they want and those at the bottom bend over backwards to assist them, praying that the next big job or the next big marriage is round the corner.

Wilder’s film skewers the ambition and manipulation behind the American dream. Baxter, a down-trodden schmo, works in an office where hundreds of workers sit in lines entering data like worker ants. (The sequence was Wilder’ visual tribute to King Vidor’s 1928 The Crowd). Acclaimed French art director Alexander Trauner (thegenius behind Les Enfants du Paradise) created the effect with intelligent use of false perspective (those at the back are little people made to look far away), and Baxter’s office is a triumph of capitalist indifference made flesh. The big wigs (the only ones with individual offices) are interested only in getting what they want and value nothing more than the keys to the executive bathroom. 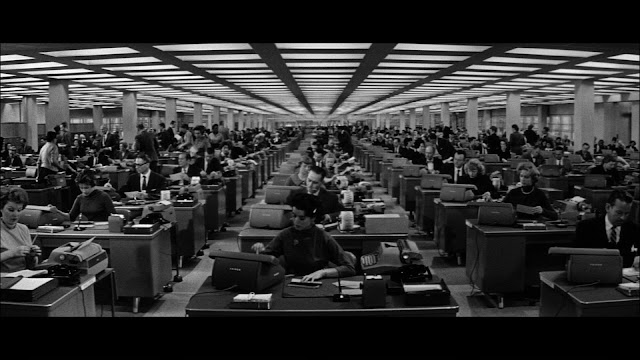 It’s Mad Men before its time. A drunken Christmas party is a picture of debauchery, a hotbed of drinking and sex. Kubelik can hardly operate her lift without getting her bottom pinched by an executive. At the apex is Sheldrake the personnel manager, brilliantly played by Fred MacMurray as a heel who thinks he’s reasonable. Sheldrake is the personification of selfish indifference, interested only in getting what he wants all the time. He strings along both Kubelik and Baxter with empty promises (of marriage and promotion), constantly with the fixed smile of the uncaring professional, glancing at his watch during illicit dates with Kubelik and interested in Baxter only as long as he can gain access to his apartment.

As the owner of that apartment, Jack Lemmon is superb as the nebbish Baxter. No one could look or sound more like a struggling nobody like Lemmon, the film brilliantly playing on his relatable every-dayism. With his head jutting forward, his voice and manner always too eager to impress, to ingratiate, he’s the American dreamer ground down by the reality of having to get ahead. It works so brilliantly due to Lemmon’s charm, even though many of the things Baxter does in the film are slightly unpleasant. He’s ambitious, but only because he feels like it’s the only chance he has. But deep down Baxter is kind, he’s playing the role that he thinks he needs to play to make a success of life – so you never stop kind of loving him, even as he enables cheating spouses and good-time girls (at least one of whom is a not-even veiled spoof of Wilder’s bette noir, Marilyn Monroe).

But Baxter is one of us, he’s a down-trodden, a bit clueless and so his good intentions are constantly misdirected. So we care about him, just as we care about Kubelik, wonderfully played by Shirley MacLaine. She’s sweet and endearing, full of quirky charm and endearing sparkiness. But it covers the pain of all misused mistresses, constantly being strung along by their lovers with the promise that yes, eventually, they will leave their wives. The film heads into dark territory with the impact this has on Kubelik but even after all this, she still gives Sheldrake yet another chance. Because, in Wilder’s world, it’s hard to turn your back on how the world works.

It’s the same rules of the world that leave Baxter sitting outside his apartment in the rain, waiting for his boss to “finish”, or spend the night walking the streets or being stood up at the theatre because his prospective date is his boss’ mistress. But despite all this, the film is funny, partly because the set-up is in itself funny and Wilder laces the cynicism with plenty of humour (acidic or otherwise). There are hilarious misunderstandings – all of Baxter’s neighbours think he is the ultimate party animal – and relatable comedy of the lonely, with Baxter’s TV dinners and imaginative use of tennis rackets to strain spaghetti.

The film also throws together a neat romantic plot between Baxter and Kubelik that’s underplayed, endearing and feels truthful. Many people have criticised the ending as feeling tacked on and betraying the coldness of the film’s social satire. But I think it’s there throughout – this is a film that has a fury for the cruelty of capitalism and people like Sheldrake, but no end of affection for the real people who are trapped at the bottom of it. Baxter and Kubelik are never the film’s targets and always the film’s heart. Their eventual happy ending – with the film’s famous closing line of “shut up and deal” – might seem like it flies in the face of the acid of the film, but that’s to overlook the heart that underpins all their interactions.

The Apartment is a near perfect mix of both comedy and drama, dealing with deep and dark themes with an assured and gentle touch, with a wonderful script by Wilder and IAL Diamond. With its two lead roles filled with a brilliant aplomb by Lemmon and MacLaine, plus superb support from MacMurray and Oscar-nominated Jack Kruschen as Baxter’s next-door neighbour, it’s still a superb treat.
Email ThisBlogThis!Share to TwitterShare to FacebookShare to Pinterest
Labels: Best Picture, Billy Wilder, Edie Adams, Fred MacMurray, Jack Kruschen, Jack Lemmon, Ray Walston, Shirley MacLaine