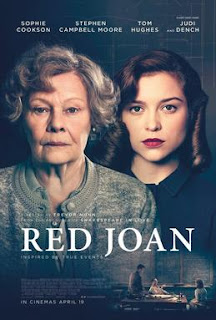 Red Joan is based on the true-life story of Melitta Norwood, the British civil servant who from 1937 passed piles of top-secret intelligence documents to the KGB. These documents helped the Soviets create their own bomb. This feeble dramatization has Joan Stanley (Judi Dench) arrested in the late 90s, with flashbacks showing her recruitment and spy work as a young woman (Sophie Cookson), motivated by her desire to “level the playing field” and by her love for shadowy KGB recruiter Leo (Tom Hughes), a German Jew.

Trevor Nunn’s flat, dull spy story has all the freshness and imagination of an ITV Sunday night drama. Tedious, dragging and very silly, it takes a ludicrous view of 1930s and 1940s espionage. The film is obsessed with downplaying the impact of Joan’s actions, and stressing that handing over these sort of secrets was fine really because the poor Russians – Stalin’s boys lest we forget – were likely to fall victim to those Imperialist Western powers that would soon be throwing their nuclear weight about.

On top of that, the film has an almost insultingly crude idea of Cold War politics, with the world neatly divided it seems into goodies and baddies and the moral implications of actions made as simple and clean-cut as possible. Joan means well, so we can’t have any problem with what she’s doing can we?

It’s a miracle she isn’t caught anyway since her espionage skills are so lamely ham-fisted. Maybe that’s because the investigation into the leak is handled so incompetently by the authorities, with heavy-handed arrests and quick and sudden lock-ups. But then that’s in keeping with the film’s view of British authorities as trigger-happy bullies, with even Clement Attlee reimagined as a “let’s drop one on ‘em” nut, desperate to have the bomb to threaten the Russkies with.

This simplistic vision of the past is made all the more clumsy by its feeble romance plot between young Joan and her romantic German spy and lover Leo (Tom Hughes, channelling his performance as Prince Albert in ITV’s Victoria). This romance should be the drive of events, but instead falls back on the usual clichés of young love on film, making some obvious points along the way about the lies we tell for love.

Joan herself is absurdly reinvented as a science expert, more adept than the men she works with (who typically look down on her as little better than a tea girl). The real Melitta was indeed little more than an office worker, but Joan here is reinvented as a pioneer of physics, a genius it seems far more evolved than the mediocre men around her. Yawn, we’ve seen it all before.

Nunn’s direction is flat beyond belief – he has never really adjusted well to film, where his (even in theatre) lack of sense of pace is often exposed – but there is a decent performance from Sophie Cookson as the young Joan, a confused idealist who struggles to do the right thing. She carries the film very well – and certainly has more to do than Judi Dench.

Dench only infrequently appears, largely for a series of “I am reflecting on the past” reaction shots. These are intercut with tediously clumsy narrative-establishing interrogation scenes, which largely serve as intros to more flashbacks (“Tell us about X now…”). There is a feeble continuation of the theme that passing nuclear secrets can’t be that serious after all, with Ben Miles as her son going through a painfully obvious arc of disbelief, anger and acceptance culminating in a “nick of time” appearance at Joan’s press conference (based on Melitta’s real life front-garden press conference to the press announcing her guilt).

Red Joan has an interesting idea, but it’s told with trivial obviousness and dramatic flatness. It’s got all the inventiveness and spark of a fairly run-of-the-mill TV drama, and despite a good performance from Sophie Cookson, it’s got little to recommend it.
Email ThisBlogThis!Share to TwitterShare to FacebookShare to Pinterest
Labels: Ben Miles, Judi Dench, Sophie Cookson, Spy thrillers, Stephen Campbell Moore, Tom Hughes, Trevor Nunn