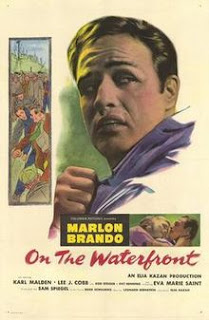 When’s the right time to speak out for what you know is right? It’s a question we’ve all faced at some point, and it’s the question that changes the life of Terry Malloy (Marlon Brando) after he is indirectly, and unwittingly, involved in the murder of a fellow dock worker. The killing was ordered by the corrupt, mob-connected union boss Johnny Friendly (Lee J. Cobb), who rules the workers of the shipyards of Hoboken, New Jersey with an iron fist. The victim was going to talk to the cops, and suddenly Terry finds himself in the middle of a major ethical bind: should he give evidence or play “D and D” (deaf and dumb) like the rest of the workers.

His bind grows ever tighter as the local priest Father Barry (Karl Malden) takes up breaking the power of the union as his own personal mission. Not to mention Terry’s growing closeness to the victim’s sister Edie (Eva Marie Saint), with whom he finds himself slowly falling in love. On the other side is his brother Charley (Rod Steiger), a lawyer and right-hand man of Johnny Friendly, who has been running his brother’s life forever, ruining Terry’s boxing career by ordering him to take a dive so Friendly could make a killing on the betting circuit. What will Terry do?

Elia Kazan’s multiple Oscar winner is a powerful, beautifully made, engrossing and uplifting modern morality drama that still packs a wallop today. Shot largely on location in New Jersey, with lashings of Kazan’s brilliant realism and ability to bring poetic beauty and emotional force to the most everyday of settings, On the Waterfront is sublime, a film to make you rail against the injustice of corruption and the unthinking cruelty of everyday folk when given a chance to stigmatise someone.

Kazan and screenwriter Budd Schulberg (whose script is a beautifully judged mixture of soulful dialogue and the rhythms of every day conversation) were both drawn towards the story after their engagement with McCarthyism in Hollywood. In this hunt for reds under the Hollywood bed, both Kazan and Schulberg named names. Both of them felt that they had been lied to and exploited by the communist movement in Hollywood – and also that Stalinist Russia was not a cause worth defending – but that didn’t stop many people rejecting them for breaking the rule of silence (the same rule that runs through this film). On the Waterfront is a heartfelt defence of the whistleblower (or the informer), and why that can sometimes be the only option open.

Based on a true story, Kazan’s film is a masterclass in carefully controlled, intelligent direction bringing out brilliant acting performances (always one of Kazan’s major strengths as director). Leading the way here is Marlon Brando, giving possibly the most famous, most influential acting performance in film history in the lead role. It’s not really an understatement to say it changed the face of movie acting. Brando here performs with a low-key, casual, almost tender naturalism that stands completely at odds with the more exhibitionist performers of the late 40s. And he funnels all this beautifully into Terry Malloy, a tough guy whom he inhabits with a vulnerability and gentleness that never once feels out of place with his temper and pride. There is instead an awe-inspiring transformation here, of the actor becoming the mumbling, uncertain character – not afraid for words to be lost, not worried about making eccentric or unexpected choices as a performer.

Two scenes stand out. In the first, Brando has his first long conversation with Edie Doyle, having rescued her from being set on by union men. In a single take – a carefully orchestrated willingness to let the actors explore the emotional truth of the scene from Kazan – Brando’s Terry shyly, gently, haltingly asks about her life and tries to explain his own. At one point, Edie drops her glove and Brando picks up the glove, fiddles with it and then puts it on – the sort of inspired naturalism that feels like nothing on paper, but on film carries a strange emotional force, a physical representation of the bond between them (and don’t underestimate the way Saint pulls the glove gently from his hand). The entire scene has the air of reality to it, Brando chewing gum, Saint wondering how much of herself to show to a man she isn’t sure she can trust. It’s masterful.

The other scene is of course possibly one of the most famous scenes in movies ever: I coulda been a contender. For films, this is like the To Be or Not To Be speech, a speech that has been quoted and riffed on ever since. But again, Brando resists the temptation throughout for histrionics – when Charley pulls a gun, Brando reacts not with shock or anger but sadness, almost tenderly pushing the gun aside and letting his voice fill with a world of regret for what has become of their relationship. Steiger is superb in this scene, but you can’t look at anyone except Brando here, awkward, sad, struggling to work out what to do with his life and finally confronting the broken past between the brothers with pointed regret and calm realisation rather than the anger and rage that other actors would have chosen. This is an actor who redefined his profession, at the top of his game.

The film is crammed with excellent performances. Eva Marie Saint (Oscar winning) has just the right measure of gutsy determination, fear and tender sweetness as the woman who opens Terry’s eyes to right and wrong. The film gained three Supporting Actor nominations (they all lost). Steiger is cocksure but self-loathing as Terry’s ambitious brother. Lee J. Cobb rages as only he can as the blowhard bully Friendly, demanding absolute loyalty. But on this rewatch, I loved Karl Malden’s moral certainty, courage and stubbornness as Father Barry. In any other film Barry’s speech railing against the dockers for being part of the system that oppresses them, all the time being pelted by food, would be the highlight of the film: here it’s just one of several stand-out moments.

Kazan was a superb visual stylist, this black-and-white masterpiece brilliantly shot by Boris Kaufman to create a world that feels the perfect mixture between the documentary realism and the theatrical. And working with a superb script that he felt such investment in helps to create a story that carries real emotional force, carefully investing you right from the start in Terry’s fundamental goodness and naivety, inviting you to feel rage on his behalf as he is sent to Coventry by his workmates. Topped off with a beautiful score by Leonard Bernstein – part jazzy, part wonderful orchestral stylings – this has barely aged a day in it’s over 60 years.
Email ThisBlogThis!Share to TwitterShare to FacebookShare to Pinterest
Labels: Best Picture, Elia Kazan, Eva Marie Saint, Karl Malden, Lee J. Cobb, Marlon Brando, Rod Steiger, Social issues