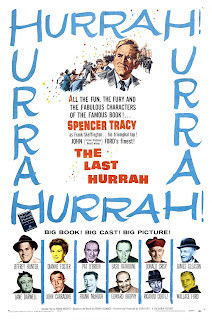 Mayor Frank Skeffington (Spencer Tracy) is running for a fifth term of a “New England city”. Skeffington’s roots lie in the town sprawling Irish population, and has successfully played the game of machine politics all his life. He’s alienated the members of the towns traditional elite – who can trace their ancestors all the way back to the Mayflower – but he’s loved by the regular people of the city. But is Skeffington going to find himself out of touch with a political world starting to embrace populism and the power of television.

John Ford’s adaptation of a hit novel by Edwin O’Connor, is one of his rare “present day” pictures. But it’s a bit of a busted flush. What should have been an exploration of a tipping point in American politics, totally fails to successfully land any of the points it could make. It’s a film that doesn’t understand the Kennedy-esque world America was moments away from embracing, and looks with such ridiculously excessive sentimentality at old-school politics it manages to tell us nothing about the corruption and dirty deals of this sort of machine politics. Effectively it’s a film that takes two long hours to tell us almost nothing at all.

The film adores two things – and it’s not a surprise in a Ford film – the past and the Irish. Anything from yesteryear is covered in a halo, with the parade of old-school Hollywood character actors from the Ford rep company taking it in turns to denounce and condemn anything and anyone less than 40 years old. Every young person in the film is either a feckless idiot – Skeffington and Cass’ sons are a playboy and an embarrassing moron – or, like Jeffrey Hunter’s Adam Caulfield (Skeffington’s nephew covering the election for the local paper) is there merely to provide doe-eyed adoration.

As for the Irish, the film loves the grace and charm of this old immigrant community. Skeffington’s Irish political machine is sanitised beyond belief. In the real world these sort of organisations operated on a system of back room deals, intimidation and careful arrangements to deliver set quotas of votes on polling day. Sure many of these politicians also delivered a number of social reforms – as Skeffington does – but any suggestion that any of Skeffington’s dealings could ever be described as dirty are roundly dismissed. Here it’s all about what Skeffington could do for other people, and no mention of the endemic corruption in many politicians like this. Instead Skeffington is presented with nothing but rose-tinted sentimentalism, a respectful widower, a kind man, whose actions are often more about other people than politics.

Former Boston mayor James Michael Curley – who Skeffington was clearly based on – was imprisoned for corruption. No chance of that happening to Skeffington who only uses intimidation and back-street savvy to fight the causes of orphans and widows (literally) and takes nothing at all from the public purse (although he still lives in a lovely big home). By contrast his elite opponents are the sort of scowling, greedy, penny-counters you might find in a Frank Capra film, shameless bankers and newspaper types who care nothing for truth and justice and only their own selfish needs.

Perhaps that’s why Skeffington’s opponent McCluskey (an early Kennedy substitute with his perfect family life, war record and lack of actual accomplishments) is portrayed as such an empty suit, a mindless, grinning yes-man who has nothing to say and no goals to meet. Ford’s contempt for him – and for the new word of television – drips off the screen. The TV shot we see McCluskey shooting is a farcical mess, poorly shot, edited and delivered with stilted artificiality by McCluskey and his tongue-tied wife. Not only is it not particularly funny, the presentation of this just shows how out of touch Ford was with modern America. Two years after this, Kennedy would win an election largely off the back of his ability to present a dynamic image on TV. Skeffington even crumbles in the election due to his traditional, press-the-flesh campaign not competing effectively with TV slots. How can that look even remotely convincing when Ford shows his rival has no mastery of the new media at all? That in fact he’s worse at making TV than Skeffington proves to be?

What exactly was Ford going for? By failing to criticise anything at all about the old-school politics and pouring loathing on the new politics, he ends up saying very little at all. Skeffington is a twinkly angel, but we never understand why so many in the church and the city oppose him – other than the fact I guess that he is Irish. Donald Crisp’s cardinal promises at one point near the end to reveal why he always opposed Skeffington – only to be hushed. If anything bad ever happened, Ford ain’t telling us making this one of the most dishonest of his tributes to Old America.

None of this is to criticise much of the acting, which is great. Spencer Tracy dominates the film with his accustomed skill and charisma, his Skeffington both a twinkly charmer and a practised flesh-presser who manages to subtly pitch and adjust his character depending on his audience and whose physicality helps to assert his dominance in every scene. Pat O’Brien does fine work as his fixer and Basil Rathbone is suitably sinister as a his principle financial opponent. Ford also puts together some memorable shots – especially a long walk Skeffington takes past a victory parade – and scenes, but the film is an empty mess. And, with its extended final twenty minute coda, goes on way too long.
Email ThisBlogThis!Share to TwitterShare to FacebookShare to Pinterest
Labels: Basil Rathbone, Dianne Foster, Donald Crisp, James Gleason, Jeffrey Hunter, John Carradine, John Ford, Pat O'Brien, Political dramas, Political satire, Ricardo Cortez, Spencer Tracy, Wallace Ford