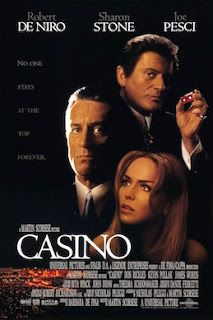 Scorsese’s Casino often gets overlooked in the master’s CV. Marking his first gangster film since Goodfellas, Casino is a very different film, a sort of combination history lesson and slice of violent gangster interplay, in which Las Vegas first gives these gangsters all their dreams coming true before chewing them up and spitting them out like all the other hopeless gamblers. And in doing that, it’s a perverse sort of nostalgia for the little guys being allowed to run the show – even if they did that by putting heads in vices – before they were shunted out by the even more ruthless efficiency of the mega-corporations. Because a world like Las Vegas only makes it easier for basic greed and personality flaws to take hold and ruin everything that’s good.

Sam “Ace” Rothstein (Robert De Niro) is a gambling and odds fixer, a man so expert at what he does and how he does it, so skilled at working the odds to spin out a profit for the Mafia, that the Chicago mob hires him to run their casino in Las Vegas. Rothstein turns the casino into the ultimate money making machine, understanding the odds of every bet and squeezing money out of every pore of the operation. While Sam takes care of the money, childhood friend Nicky Santoro (Joe Pesci) handles the other side of the Mafia business – increasingly abusing his position to make his own fortune on the side. Sam is further undermined by the only “against the odds” bet he ever made in his life: falling in love with Ginger (Sharon Stone), a selfish, self-destructive former hooker who is happy to take Sam’s money but will never offer him the love he craves. Disaster awaits.

Part of the reason perhaps why Scorsese’s Las Vegas epic (and the film is nearly three hours long) doesn’t have the warm regard of many of his other films is its focus on an intricate – although fascinating – explanation of how a Las Vegas casino operates, and the film’s reliance on voiceover to convey a vast amount of backstory, personal motivation and character insight. The opening hour of the film is almost entirely narrated (largely by De Niro and Pesci, although other characters occasionally intrude), as Scorsese shows exactly how a mob-skimming operation works in a casino, as well as nearly every detail of its operation, from day-to-day workings to dealing with cheats. The mechanisms of Las Vegas – along with its corruption, violence and blatant theft – are what fascinates the film. These sequences are assembled with the expected grace and skill of Scorsese and his regular editor Thelma Schoonmaker, but they lack the emotional connection of Goodfellas.

In fact, Casino might almost be some sort of tribute to silent film, so much of it is images accompanied alone by voiceover and well-chosen pop songs. It’s a film where imagery is all, with the camera prowling along the red-lined interiors of the casino itself (where daylight never intrudes), or lovingly following the progress of coins from slot machines to counting rooms to bags stuffed with cleaned bills for gangsters to carry away to their masters. It all makes for a rich and fascinating social history, even if you do feel slightly distanced from it by its near-documentary style voiceover.

But then, this voiceover does allow for a surprisingly rich character study once you plug into it. With the design stressing the demonic red-lined rooms and lights of Las Vegas – and the Saul Bass designed title sequence of a man falling through flames into a neon lit underworld – the idea of this place as some sort of hell is there all the way through. This context allows us to see three characters who are corrupted and destroyed by the pressures and temptations of five years running an operation in America’s capital of temptation and excess. And as the film goes on, everything gets bigger, from the garish colours and clothes to the music to the increasingly graphic violence. 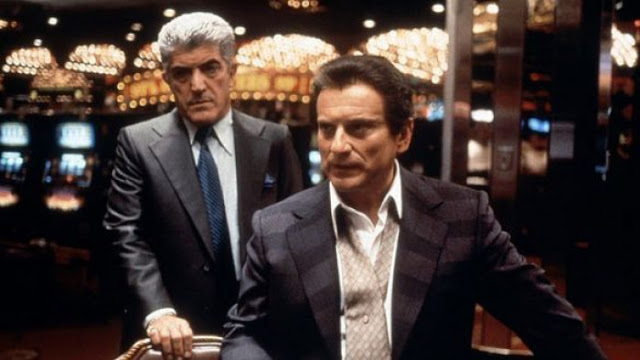 And this film is astonishingly violent. Heads are placed in vices, people are brutally murdered by everything from pens to baseball bats, hits happen with a gruesome immediacy. And the person carrying out most of these acts is Pesci, a demonic imp lacking any sense of charm. Pesci retreads his role from Goodfellas, but even worse if possible, a man for whom violence is as second-nature as breathing.

It makes a neat contrast through with De Niro, who dominates the film (and either appears in or narrates almost every minute). It’s one of De Niro’s calmer, most reflective performances ever in a Scorsese picture (arguably until The Irishman). He’s a quiet, meticulous, fastidious professional gambler, who never takes a chance professionally but takes huge gambles with his personal life. De Niro brings the film a calm centre, and the precision of a man who both loves what he does but is so obsessed with making things perfect he gets no pleasure from it. Unlike many De Niro roles in Scorsese, Sam is the closest you can see as a regular guy, someone who works in a world of theft and violence but sees that as a cost of doing business rather than a career choice. 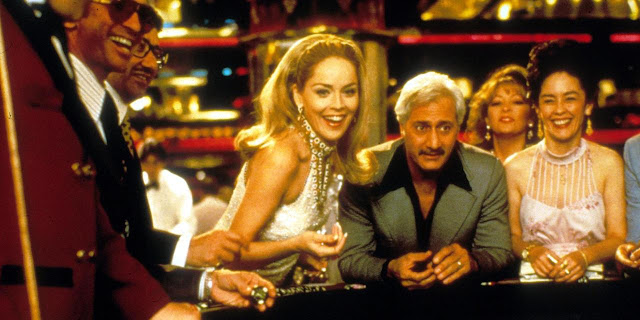 It’s why he remains sympathetic, despite the destruction around him. Perhaps also helped by his simply appalling wife. Sharon Stone gets her finest part ever (she received the film’s only Oscar nomination, for Best Actress) as the self-destructive, greedy addict Ginger who doesn’t want to change anything about her life and marries Sam solely for his money, but continues her relationship with her pimp Lester (a sleazy James Woods) and snorts cocaine in front of her five-year-old daughter. But Sam takes the chance because he loves her – and this Jewish outsider, who moves in circles of Italian mobsters and Southern societies that control the state, wants nothing more than to be loved and accepted. It’s what keeps him close to Nicky – for all his horrific impulsiveness – because Nicky is the closest thing he has to a genuine friend.

It’s a theme that runs throughout the whole film. The Mafia allowed its “street” operatives to run this operation in Las Vegas – and would never allow such regular soldiers such power again – and Las Vegas itself closed its doors to these more “independent” operators in the future to give the riches to corporations and insiders. It’s part of what makes Casino such a fascinating history lesson – this is the Las Vegas we all kind of think of, dirty, corrupted and sexily run by gangsters (even if the film makes clear that these guys would crush your head for looking at them the wrong way). But it’s now a circus, an entertainment ride.  Because our heroes here make the same mistakes as the guys that go through their casino – “the longer they play, the longer they lose”.
Email ThisBlogThis!Share to TwitterShare to FacebookShare to Pinterest
Labels: Alan King, Don Rickles, Frank Vincent, Gangster films, James Woods, Joe Pesci, Kevin Pollak, LQ Jones, Martin Scorsese, Robert De Niro, Sharon Stone