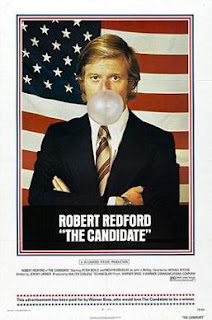 Bill McKay (Robert Redford) has it all – the looks, the charm, the ideals, and he’s the son of former California governor John McKay (Melvyn Douglas). Who else could stand a chance as the Democratic candidate against long-time incumbent Senator Crocker Jarmon (Don Porter)? McKay is reluctant to run – but he’s promised by Marvin Lucas (Peter Boyle), election specialist, that he has no chance of winning so sure, he can say whatever he wants. But Lucas has another plan, to turn the good-looking, charismatic McKay into his ideal candidate – workshopped, bland, generic and with as wide (and shallow) an appeal as possible. And as the election goes on, McKay turns from not caring, to not wanting to get humiliated, to wanting to win. What price idealism in a political game like this one?

Today, The Candidate looks considerably less fresh and inventive than it seemed in 1972. Back then it caught the wave of an America becoming increasingly disillusioned with its leaders and elections. Then, the idea of mass media manipulating focus-grouped candidates into something pliable, bland and uncontroversial to appeal to as many people as possible, seemed revelatory. Today, when even the optimistic The West Wing chronicles how even the good guys are obsessed with being on message and putting together political ideas into simple, repeatable soundbites with image as everything, The Candidate hardly looks ground breaking.

It won an Oscar for its screenplay, but it looks behind the times now – or even telling us only what we know already. So politics is all about image? Well big news there. In its Faustus-like structure, with McKay being corrupted away from his initial principles into the sort of cookie-cutter candidate focus group organisers dream of, it should be compelling. It isn’t really, part of the problem being that, even with his ideals, McKay is not really an interesting character.

He’s a character that can almost be defined as “looks like Robert Redford”. That’s what makes him appealing – the script spends no time at all on establishing any political or social ideas in McKay early-on beyond a vague wish to “do good” with his low-key law consultancy representing only the poorest. There is a half-hearted attempt to add some daddy issues, with the son determined to never become the principle-free politician his father (a blithely uncaring Melvyn Douglas) is. But these don’t really come into shape. Perhaps that’s the point? What makes McKay so appealing to Lucas from the start is he looks like a Kennedy, but has no real personality or ideas of his own.

He is, basically, a weak person who is quickly shuttled from place to place, told what to say and what to do and willingly converted one step at a time into an even greater non-entity. McKay clings to the idea of his political videos being about an idea, but quickly accepts “ideas don’t work” in these short pieces and allows them to be turned into puff pieces praising his youth and vigour. The film does get some fun out of the emptiness of campaigning – the slogan “McKay: The Better Way” means nothing at all – not to mention McKay becoming so dependent taking direction he can’t even do a broadcast without asking if his jacket should be buttoned or unbuttoned. But it lacks a real oomph.

Perhaps that’s because the film doesn’t really have a plot or characters as such. Every person in the film is there to fill an objective, no more and no less. Even Lucas, the arch manipulator, is little more than a cipher to represent spin doctors (years before the term was coined) for whom the competition and battle is all that matters and principles count for nothing. Ritchie shoots the film with a sort of sub-Altmanesque observational style with overlapping dialogue, but never really immerses the viewer in the quick-moving world of politics, instead serving up a series of mediocre images and scenes that serve as sketches or statements (Campaign ads are empty! Politicians are pre-packaged! They don’’t answer questions!) that eventually become a bit wearing.

Without this sense of narrative, events drift by and character developments just seem to happen with no logic. Redford supplies no real character to the part, unable to convey a sense of growing corruption and ambition in his performance. So when McKay starts doing things – like the mistress he takes during the course of the campaign – it just feels like the film has a nihilistic loathing for politicians rather than the ability to make any actual points that carry weight.

It’s a disappointment as this is a good idea, and could have really worked if the writers and directors had allowed the film to have some heart alongside its cold cynicism, or even had allowed some clear story to play alongside. Instead we simply watch McKay becoming even more empty and artificial – taking part in a debate with his rival on air, in which he skilfully never answers a single question but parrots quotes from his briefings – only addressing at the very end that all this leaves us with politicians good at winning elections but with no idea about how to run the country. While it is one of the first films of its type, you feel it has long since been surpassed.
Email ThisBlogThis!Share to TwitterShare to FacebookShare to Pinterest
Labels: Allen Garfield, Don Porter, Melvyn Douglas, Peter Boyle, Political dramas, Political satire, Robert Redford