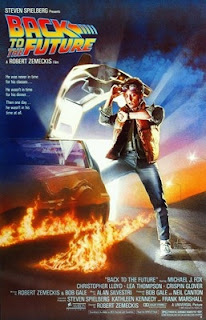 In the tentpole 1980s film icons, few films are as beloved as Back to the Future. With the highest of high-concepts, it could easily have alienated people – or felt a little bit silly – but instead it’s a perfectly structured entertainment, a wonderfully assured combination of light comedy, drama, science fiction, farce and adventure. It’s one of those rare films that doesn’t have a wrong beat in it.

Set in 1985, Marty McFly (Michael J Fox) is a your typical teenager, cool, loves rock music, has a great girlfriend Jennifer (Claudia Wells) – and is worried he’s going to turn out like his parents, his weak father George (Crispin Glover) bullied by his supervisor Biff (Thomas F. Wilson) who never amounted to anything and his depressed mother Lorraine (Lea Thompson). His friend, eccentric scientist Emmett “Doc” Brown (Christopher Lloyd) ropes Marty into tests of his latest invention – a time travel machine built into a DeLorean car. When the first test is interrupted by angry Libyan terrorists – furious that Doc used their investment and stolen plutonium to build a time machine rather than a bomb – Doc is killed and Marty escapes in the DeLorean, accelerating to 88mph and accidentally throwing himself thirty years into the past. There he meets his parents, disrupts their first meeting and finds his mother falling in love with him and his father a weakling who he has to teach how to become a man and win his mother’s love – all while finding the help of the younger Doc to return him to 1985.

Back to the Future has a tricky concept but a remarkably simple story which revolves around completely relatable ideas and questions. Who hasn’t wondered what your parents were like when they were young? Would you get on with them? How different would they be from the adults you know? These ideas are all caught – and told with maximum comic and dramatic impact – in Robert Zemeckis and Bob Gale’s superbly constructed script.

The secret really is in the cooking of that script – nearly five years in the making – where every single scene serves a clear purpose, and all the plot points sprinkled through the first twenty or so minutes or brilliantly pulled into effect in the rest of the film. With skilfully swift and economic story telling us all the information we need to know about Marty, his interests and skills, his parents – not to mention all the hundred and one other things happening in the film – so that as each careful plot point sprinkled through the film comes into effect it’s instantly satisfying and convincing. As director Zemeckis also gets a perfect conveying of the film’s tone of light comedy, even more surprising since it frequently touches on darker themes (murder, incest and rape for starters!) but never once feels like it’s tone is falling all over the place. 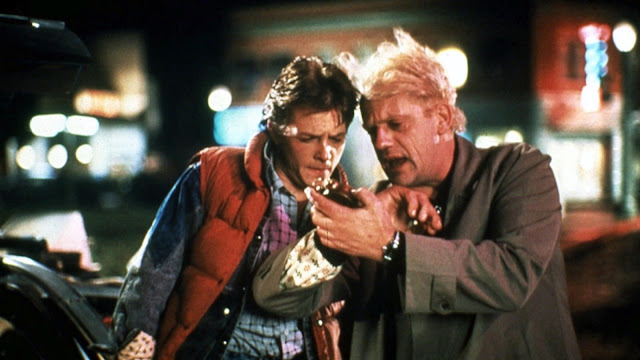 The film has a brilliant Frank Capraesque film of the strength of how one person can make a difference – both for good and bad. By arriving in the past – and with his confidence, bravery and shy decency – Marty at first ruins his parents meeting and then (almost without realising it) builds up both of them to head-off the mistakes they will make in their lives. Most obviously in his coaching of the timid and frightened George into someone who will have the confidence to make his own choices and go after the things he wants. The grooming of luckless loser George into someone who will stand up (eventually) against the brutality of Biff (a swaggeringly vile Thomas F Wilson) is particularly affecting, Crispin Glover to be commended for making a character who is wimpish and frustrating but not unlikeable. Lea Thompson also does great work as a sweet young girl, who’s more daring than she appears.

The film’s real success though is tied directly into the casting of Michael J Fox in the lead. Fox was born to play this role, the film effectively a showcase for his timing, ability to throw just enough shade and emotion onto scenes to keep them real, and above all his almost unparalleled skills as a light comedian. Originally unable to play the role due to a scheduling clash with his sitcom Family Ties, Fox was only bought on board after three weeks when backup choice Eric Stoltz proved unsuitable for the role (by his own admission). The entire film was shot either at night or the weekend to allow Fox to shoot after this 9-5 commitment to Family Ties was finished. And thank goodness because Fox makes the film.

He also has superb chemistry with Christopher Lloyd (graciously stooping for the whole film so he could fit in the same frame as the famously diminutive Fox). Lloyd, another great comedian with the instincts of a natural actor, channelled Einstein and conductor Leopold Stokowski as Brown, making him a larger than life eccentric who still feels like a real person. These two actors spark off each perfectly, adding a huge amount of comic and dramatic force to their rat-a-tat dialogue. Fox’s skill in understanding the light drama tone – and making what was already a very strong script comedy gold – as well as his ability to be immediately relatable to viewers is what makes the film an eternal success. 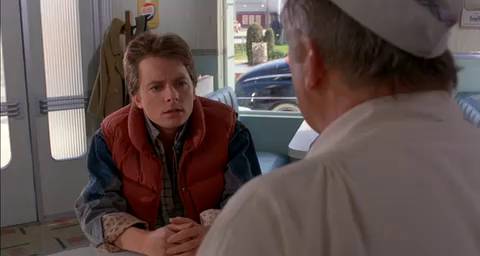 That and it’s simple themes. The joke of travelling back in time and having your mum accidentally fall in love with you is perfectly judged, being just the right amount of icky (Fox’s horrified discomfort is hilarious) without being unsettlingly disturbing. The reconstruction of the tone and vibe of the 1950s is perfect – with Marty’s more hip 1980s style juddering up against the picket fence Americana of the past. There is plenty of humour from watching Marty “invent” everything from the skateboard (in a hilarious but gripping chase sequence) to rock and roll music. But it all works because the film is very heartfelt and genuine and very sweet.

Not only that but when it wants to be it’s also exciting and dramatic. The final resolution of George’s rise to manhood carries a real sense of threat as well as a cathartic moment of violence. The film’s final sequence as Doc and Marty race against time to channel a lightning strike to get the Delorean back to 1985 is truly exciting, helped as well by Alan Silvestre’s perfectly judged musical score (and thank goodness for executive meddling that nixed Zemeckis original idea of a Nevada test site and the time machine being built into a fridge). It all works as such an entertaining package you don’t even think about the fact that, as Marty returns to a radically altered family life in 1985, he won’t share any memories with his parents and siblings.

With a star actor taking on the role he was born for – and Fox was never better again, perfectly charming, endearingly sweet, cocksure and cool – Back to the Future has been entertaining audiences for almost 35 years – and it will carry on entertaining them the more we head into the future.
Email ThisBlogThis!Share to TwitterShare to FacebookShare to Pinterest
Labels: Christopher Lloyd, Comedy, Crispin Glover, Lea Thompson, Michael J Fox, Robert Zemeckis, Science fiction, Thomas F Wilson