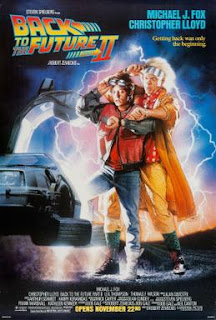 After the smash hit of Back to the Future a sequel was inevitable – particularly with that hook ending with our heroes zooming off into the future to fix Marty and Jennifer’s kids. Back to the Future Part II is often fondly remembered for its journey into 2015, a typically 1980s view of what the future might be like, but this is journey is mostly a slightly embarrassing mess that the film has to spend quite a bit of time getting over before the plot can start in full.

The journey into the future is largely a narrative cul-de-sac, which is mostly there to introduce a Sports Almanac covering 1950-2000 which Marty (Michael J Fox) picks up in an antiques store with an eye on placing some bets in the future. He’s firmly told by Doc (Christopher Lloyd) not to mess with the timeline, but that’s never here nor there to Old Biff (Thomas F. Wilson), who pinches both Almanac and DeLorean to head back in time to 1955 and handover the Almanac to his younger self. Which means when Marty and Doc return to 1985 from 2015, having not noticed the theft and return of the time machine, they find 1985 has been transformed into a nightmare dystopian world where Los Angeles is ruled by multi-billionaire Griff. So it’s back to 1955 to repair the timeline again – and this time dodge round their younger selves who are still going through the events of the first film.

Zemeckis and Gale, it’s pretty clear, actually wrote themselves into a bit of a corner with their visit to the future. Firstly, the problem with the kids turns out to be fairly quick and easy to solve. Secondly, they are stuck with Jennifer (Elizabeth Shue replacing the unavailable Claudia Wells) who is instantly unceremoniously knocked out not once but twice in order for her not to be a third wheel on the boys adventures. Thirdly, the real interest and delight of these time travel films is seeing the past through the perspective of the present, and we lose that completely in a silly painfully of its time vision of the future. Gale himself had ruled out visiting the future in the first film, because all visions of the future date quickly on film – so it’s a shame he didn’t listen to himself.

The future sequence of the film is honestly pretty awful, in the midst of a film that takes a long time to get going and then relies very, very heavily on recreating the first film either spiritually (several set pieces in the future echo the first film, from feuds in a diner to the skateboard chase here done with a hoverboard) or literally (the third act of the film is a point-by-point recreation of the first film from different angles). The future sequence lacks any real point or drive, other than to establish two plot points: the sporting almanac and how Marty’s character flaw of pride leads him to take stupid, self-destructive risks.

Other than that it’s an increasingly embarrassing look at what a 1980s person thinks the future might be like – flying cars, hovering skateboards, strange futuristic clothes, cybernetic implants, loud, bright colours – it’s all there. Sure there are some things correctly predicted – principally the idea of something approaching the internet and video calls – but the attempts at presenting a humourous view of the 2010s falls flat. This isn’t helped by the desperate mugging of several of the actors – none worse than Fox sadly, who plays his whiny Grandson, a latex covered middle aged version of Marty and (worst of all) his granddaughter – straining for laughs, but missing completely. It’s a cheesy, awkward sequence that says more about the hang-ups of the 1980s than anything else.

The film only starts to pick-up when we head back to the hellish Mad Max version of 1985 caused by Biff’s meddling. Sure it’s also an excuse for retreading some other elements of the previous film – and conveniently means that George McFly can be killed off, resolving the problem of working around a second recasting after the difficult to work with Crispin Glover turned down the film – but at least it kicks a bit of a plot going, away from the more feeble moments and overacting in the future section.

Which it brings us to the final act as the film reworks, reimagines and represents the events of the first film once again. I’m split on this between it being a fun, fresh idea of looking again at a beloved film (as well as opening up some comedy opportunities to play on the viewer’s expectations) or a sign of the well running dry. Either way it works a lot better than the future sections of the film, even if again the narrative structure is an almost exact re-tread of the first film, once again showing Marty trying to juggle events to get the outcome he needs and a race against time ending that culminates in a bolt of lightning and a cliffhanger.

There are some fun moments in the film, but Back to the Future II generally falls between two stools, trying to tell a new story while also setting up Part III. I appreciated more watching it again the way it carefully sets up themes and ideas for Part III – from Eastwood avoiding death in a shootout on a TV screen (the same way as Marty will) to establishing Marty’s character flaws that the third film shows him struggling to overcome. But it’s a slightly cheesy, slapdash film – short as well, as the opening 5 minutes are a reshoot of the first film and the last five are a trailer for Part III and the credits. It feels like Gale and Zemeckis felt forced to deliver the future against their will, and then spend the rest of the film course correcting to bring us back to the Past.
Email ThisBlogThis!Share to TwitterShare to FacebookShare to Pinterest
Labels: Christopher Lloyd, Elisabeth Shue, Lea Thompson, Michael J Fox, Robert Zemeckis, Science fiction, Terrible Films, Thomas F Wilson