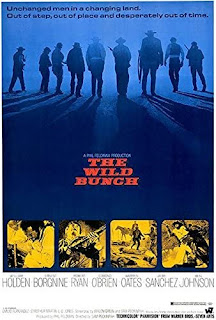 SPOILERS: Discussion of The Wild Bunch is pretty much impossible without discussing its ending – but then it does have a pretty famous ending. Well you’re warned…

It’s easy to look back the Wild West with rose-tinted glasses. To remember it as being when the American spirit was at its best and a romance ruled. To basically take the “Wild” out of the picture. Peckinpah’s The Wild Bunch is all about putting that “Wild” front and centre, a stunning exploration of the closing days of the Wild West that replaces sentiment and nostalgia with violence and a group of men who know nostalgia is just the vanity of hardened, brutal killers.

In 1916 Pike Bishop (William Holden) is the leader of a notorious gang of criminals, ruthless killers all, wanted by the law – and the rail company they have been robbing for years – at any price. Pike’s latest bank job winds up being a trap, with a deadly shoot-out taking place in the middle of a town (with the population lethally caught in the crossfire) as the rail company tries to kill Pike’s crew, their efforts led by Pike’s former partner Deke Thornton (Robert Ryan), forced to work against Pike or return to the hellish jail at Yuma. The massacre sees only a few members of the gang survive – Pike, his best friend Dutch (Ernest Borgnine), the Gorch brothers Lyle (Warren Oates) and Tector (Ben Johnson), Mexican gun-slinger Angel (Jamie Sánchez) and old-timer Freddie Sykes (Edmond O’Brien). The gang flees to Mexico, with Deke and his posse dispatched on their heels by the furious railway company. In a Mexico ripped apart by civil war, the gang are hired by would-be warlord General Mapache (Emilio Fernandez) to hijack guns from the American army – but there are other dangers when Angel has friendly contacts with the Mexican revolutionaries.

Peckinpah’s film is a stunning exploration not only of the dying dreams and way of life of old men in the West – Pike, Deke, Dutch and Freddie are all old men while the Gorch brothers are hardly in the first flush of youth – but also the endemic nature of violence. Peckinpah’s film is unfailingly brutal in its depiction of violence, an infection that runs through every level of society. Everyone from the children – the film opens with a gang of children laughingly feeding two scorpions to a mass colony of ants, before setting all the animals on fire (look in vain for the “no animals were harmed in the making of this picture” message) – to the men themselves. The film’s opening shoot-out – a technical marvel and also a masterpiece of slow tension building by Peckinpah – is shocking in its brutality.
Unlike Leone, to whom violence is shocking in its suddenness, Peckinpah slows down the action so that we can see (and feel) the horror of each bullet. The Wild Bunch set some sort of record – in its final shoot-out sequence – for blood squibs used. It’s not a surprise after watching the opening shoot-out between the Bunch and the railway forces. With the Bunch using a passing Temperance march to cover their retreat, bullets are fired indiscriminately, killing passers-by and men from both sides alike. No one, aside from a furious and appalled Deke (the only character who has suffered himself from violence in prison) expresses a moment’s guilt for this massacre.

But then Pike and the bunch are hardened killers to a man. Pike cares nothing for the members of the gang lost – even forgetting until late on that he left a man guarding the bank staff while the gang rode out of town – and when a wounded survivor can’t ride and agrees that Pike should finish it, he doesn’t pause for a second. Any ideas of these men as being rogues or there being any charm to living a life on the margins of the law are rapidly dispelled.

And this violence isn’t just an American thing – it dominates life in Mexico as well, where the drunken, bullying General Mapache is a brutal would-be dictator, whose soldiers frequently terrorise, steal from and murder the villagers around them. In Mexico, the gun is law even more than the US, and these guys have even closer to being criminals in uniform, just as Deke’s posse could just as easily be working with the Bunch as against them.

So what motivates these men? What is brilliant about Peckinpah’s film is acknowledging that these violent killers may feud and fight, but they are still stretching for some sort of meaning in their life. These are world-weary old men with little to live for, who are trying to work out what – if anything – is left in their lives. And that life has to have some sort of code, some sort of grounding basis, even if everything else is up for grabs. Pike says when you “side with a man, you stay with him and if you can’t do that you’re finished”. It’s a flexible rule for these guys – and they frequently shirk it in the film when events are dangerous – but it’s a code they need to believe they would keep.

It’s that code that comes into play late in the film as Angel falls increasingly foul of Mapache’s anger and whims. It takes the gang a while to stand by it, but when they do it’s also partnered by a sad realisation that for these old men what else is there? Their lives have been ruled by the gun and shoot-out after shoot-out. Peckinpah views the West with no nostalgia, but he understands that men need to view their own lives with nostalgia at times, to understand that they may yearn to point at something and say that was what their lives were for.

And what else is there? Everyone in the film knows it’s over. They’re old men, and the world is moving on and leaving them behind. At one point the gang look on at wonder at a car owned by Mapache, and the Gorch brothers flat out can’t believe in the existence of an aeroplane. The modern world is ending the world of these guys, and Pike knows it: “We need to start thinking beyond our guns” he says at one point, but offers no solutions at all about what that might be. The modern world is the real deadly bullet that’s taking out the gang: in the final shoot-out, the key weapon even turns out to be a modern machine gun, spraying death at a level ordinary shooters can’t even begin to match. 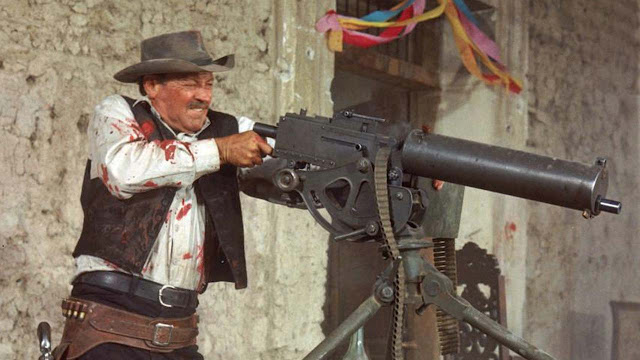 That final shoot-out sees all these themes come together brilliantly. It could almost be a rebuttal of Butch Cassidy and the Sundance Kid (released the same year) that sees our heroes captured in romantic sepia freeze frame, charging into certain death against the Bolivian army. Here we effectively see the battle, with additional machine guns and thousands of blood squibs as the Bunch take on Mapache’s army in fury at Mapache’s murder of Sanchez. In a furious shoot-out lasting almost ten minutes, it’s a blood bath as the Bunch mow down dozens and dozens of Mapache’s army while themselves being repeatedly shredded by bullets, adrenalin alone keeping them going. Peckinpah even has the final fatal bullet that takes out Pike coming from a child soldier.

But the Bunch are taking this suicidal last stand because it’s their last –  their only – chance to have stood for something, to have a code they stuck by. To stand by their partner and if that means going down in a hail of bullets, at least there is some sort of glory to it. And besides – what else have they got? The modern world has drained all purpose from their life, so why not at the end wordlessly agree to leave behind the greed that has dominated their lives and die for something?

Peckinpah’s film is simply brilliant, fabulously made and brilliantly shot and edited. The cast of pros is simply excellent. Holden’s world-weary faded glamour now leaving only a cold ruthlessness and a wish that he had more to show for it is perfectly partnered with Borgnine’s easy-going sidekick who wants to do the right thing but needs to find the reasons. Ryan is excellent as a guilt-ridden Deke, who finally has begun to understand the impact of violence. The rest of the cast also excel. The Wild Bunch may be the least nostalgia infected Western ever made, a grim reminder that the West really was Wild. But it’s also a stunningly well-made and challenging picture.
Email ThisBlogThis!Share to TwitterShare to FacebookShare to Pinterest
Labels: Action Films, Ben Johnson, Edmond O'Brien, Emilio Fernandez, Ernest Borgnine, LQ Jones, Robert Ryan, Sam Peckinpah, Strother Martin, Warren Oates, Westerns, William Holden