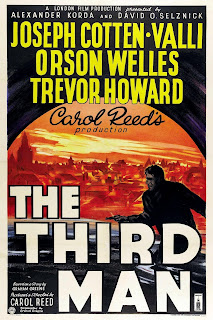 It’s regularly held up as one of the cornerstones of classic 1940s film-making – and it has frequently won polls of the Greatest British Films of all time. Does The Third Man live up to expectations? No it excels them. I doubt there has been a film more perfectly assembled than this, one where all the component parts click together to make one perfect whole. No matter how many times you see The Third Man, it weaves its spell every time.

In immediate post-war Vienna, the city is divided into four zones, each run by a different great power (the UK, US, France and USSR). The black market is rife between the zones. Into this city arrives pulp Western writer Holly Martins (Joseph Cotton), here to visit his old school friend Harry Lime (Orson Welles) – only to find on arriving that Lime died in a traffic accident, with British policeman Major Calloway (Trevor Howard) insisting that he was a black marketeer. Holly can’t believe Harry was a crook, and decides to investigate himself – on the way falling in love with Harry’s girlfriend Anna (Alida Valli) and finding that nobody’s story on what happened to Harry matches up. Could the accident actually be a murder?

Carol Reed’s atmospheric film is beautifully, perhaps flawlessly directed – so well made that for years there were fevered efforts to assign its brilliance to Welles himself. Which was studiously unfair to Reed, a director at the top of his game in the 40s.  The Third Man was the crowning glory of a run of superbly stylish thrillers that matched thought provoking themes with striking film-making. The film is soaked in the atmosphere of post-war Vienna, a city half shelled out of existence. The film was shot on location, and Reed’s camera captures the “bombed about a bit” shambles of the city, its long shadows, cobbled streets and mysterious alleys. 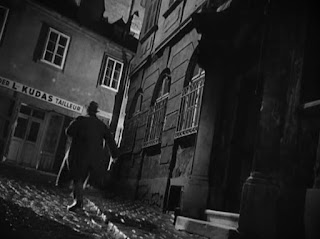 The Third Man’s filming style also plays into this truly distinctive look. Working with (Oscar-winning) cinematographer Robert Krasker, the film is shot with a luscious almost German impressionistic style, with murky shadows and noirish lighting. Reed uses huge numbers of Dutch Angles to constantly present both this shattered city, and it mysterious story, from disconcerting angles. This visually represents the uncertainty and mystery that drip from every scene, making Vienna look like some sort of sinking ship, disappearing into a mire of crime and guilt. Reed’s camera fills the edges of the frames with tramps, beggars, the dispossessed and the plain scared – a brilliant snapshot of post-war Europe unsure about the future and ripe for exploitation.

The film looks simply stunning, with Reed’s visuals throwing up images that have stuck in film heritage, from fingers poking through a sewer grill, to the iconic entrance of Harry Lime itself (possibly the most famous entry ever). Shadows loom with gigantic proportions over the streets. A final sewer chase seems to take place in a nightmare world of water, false turns and foreboding architecture. And that final shot! Sublime cinema, the stillest shot in the film, and also a superb capturing of the film’s themes of loyalty, duty and betrayal. 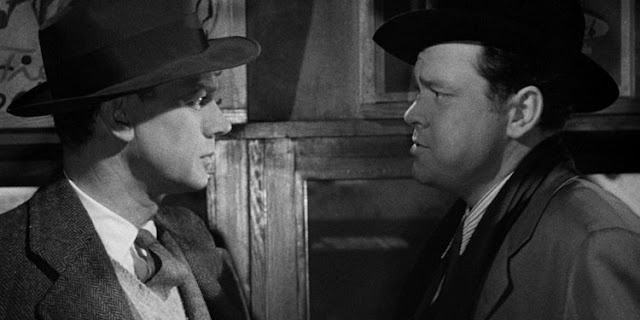 The film was scripted by Graham Greene, and occupies a wonderful corner of Greene-land. His original concept was for Holly (or Rollo in the original script) and Harry to be British public schoolboys – a plan rejected when Hollywood co-funding came to call – but it did allow Holly to be transformed into a naïve American, lost in the cold realities of post-war Europe. Holly believes in the world of black and white, and writes stories where good triumphs over evil in the Wild West. He’s adrift in a Europe where everyone lies habitually, morality is flexible, and nothing is as it seems.

Holly is bound by old chains of loyalty to Harry – but how far does that loyalty stretch? What price personal loyalty when confronted with the impact of what a person has done? Joseph Cotton’s performance is pitch perfect, a middle-ranker who has orbited his whole life around brighter stars like Harry. How one-way was the relationship? Can Holly ever think for himself? 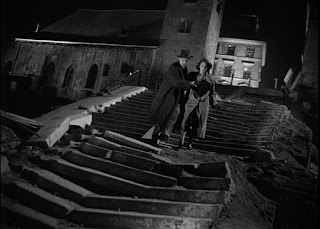 And is the right thing to do to walk away or try and correct the wrongs done by another?This divide is shown in the relationship between Cotton’s Holly and Alidi Valli’s sensational turn as Harry’s ex-girlfriend. A woman who has seen the harshness of the world, and been through a war-torn life that Holly would struggle to even comprehend, she’s a woman to whom personal loyalty trumps all things. Should you be loyal to the man you know, your experience of him – or do you have a higher loyalty that trumps that? Anna is firmly of the belief that she knows all that she needs to know of Harry and she needs to learn no more. It’s the sort of European post-war compromise that Holly can’t adapt to, the ideas of morality becoming mired in shades of grey.

It’s a world he struggles to adapt to, but is a cold hard reality for Trevor Howard’s Major Calloway – a superb performance of cool reserve that hides a strong sense of justice. Howard’s wry half-smile and control is perfect for the film, and his disgust at the actions of black marketeers is subtly and brilliantly conveyed by both the actor and Reed’s restrained direction – a visit to a children’s ward full of victims of Lime’s penicillin, is notable for leaving everything to our imagination and communicating another loss by showing a Teddy bear being dropped into a box.

And the cause of all this suffering? Why it’s none other than Harry Lime himself. No film ever captured Orson Welles’ impish charm as well as this, his shy grin and air of an enfant terrible turned terrible are brilliantly captured in the boyishly young but demonic Harry. A Mephistopheles placed on earth to tempt men like Holly, Lime argues what do a few people (or dots) here and there really matter in the long run? After all governments sacrifice them all the time – look at Vienna! – why shouldn’t we? What’s the problem? Lime grins and casually outlines a demonic view of the world, casually uses a cheap historical justification or two, and then saunters off never suspecting that he could lose the argument. Like Welles himself, he has all the glamour and magnetism that we could never have, and to live a few moments in his shadow, as Holly and Anna do, is to live a lifetime. 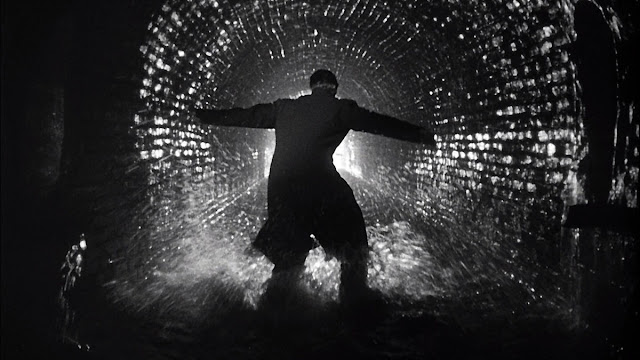 So Holly has to make a choice – the friend he knew, or the strangers he has seen harmed. The film charts the slow passage to making this hard choice, presenting us with a man who refuses to believe his friend could be anything other than the victim of persecution, to the man who is destined to turn him in. With the framework of Carol Reed’s superb filmmaking, it’s still an absolute treat.

And finally, The Third Man is blessed with perhaps the most perfect film score of all time. Recorded by Anton Karas – literally discovered playing the zither on the streets of Vienna – the score is jaunty, lyrical, schoolboyish even but can switch subtly to something quite disconcerting. It perfectly captures the schoolboy bravado of Holly and the childish lack of morals of Lime. As a match with the bombed out Vienna and its rundown, cynical citizens, it’s perfect. Like all things with The Third Man, it just works better than you could ever have hoped.
Email ThisBlogThis!Share to TwitterShare to FacebookShare to Pinterest
Labels: Alida Valli, Bernard Lee, British Films, Carol Reed, Film noir, Joseph Cotton, Orson Welles, Thriller, Trevor Howard, Wilfrid Hyde-White