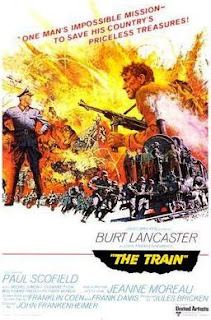 The German occupation of France draws to its close. Paris will fall in days to the Allies. As the Germans evacuate, Colonel von Waldheim (Paul Scofield) has other plans. All that fabulous modern art – all that stuff the Nazis call degenerate, the likes of Cezanne, Renoir and Monet –  that he has kept jealously guarded and locked up for years would be worth a tidy packet if he can get it back to Germany. Or is it that von Waldheim just loves the paintings so much he can’t let them go? Either way, he’s determined to load these priceless masterpieces onto a train and take them back into Germany – with rail network manager (and secret resistance fighter) Labiche (Burt Lancaster) bought in to lay on and then run the train. But will Labiche be willing to risk resistance and railway lives to prevent this looting of France’s cultural heritage?

John Frankenheimer’s rollicking, dark-edged war film mixes in serious questions amongst its compelling explosions and train wrecks. Namely – is any human life worth the cost of protecting a nation’s artistic heritage? Or in other words, what are we fighting for when we protect the nation – the people who live in it, or the ideas that underpin what a nation is? Because what von Waldheim is pinching here is a large chunk of France’s heritage – and it would be irreplaceable – and for many in the resistance it’s risks are acceptable to stop that. Even as the bodies start to pile up.

The Train is a slightly nihilistic war film, in which the vast majority of the cast wind up dead, leaving the survivors to wonder if those paintings were worth the dozens of lives lost to protect them. Frankenheimer even hammers it home in the conclusion by cross cutting between the bodies of the victims with the packing crates (each carefully labelled with an artist’s name), making the paintings seem even more like chilling tombstones. The Germans, rarely thinking for more than a second before gunning down resistance fighters or anyone caught working with them.

In this they take their lead from von Waldheim. Played with glacial chilliness by Paul Scofield, von Waldheim at first appears a reasonable, even decent man. But it becomes clear that this well-spoken, polite man has a mono-mania for art that trumps all considerations of human life. Von Waldheim believes art should belong only to those who can understand it, and clearly cares nothing for human lives around him, all of whom are disposable should he choose. Under his gaze, civilians are put against the wall without a second thought and soldiers instructed to meet all attempts at slowing the train with lethal force. Frankenheimer carefully builds over the course of the film von Waldheim’s unhinged amorality, culminating in a series of Dutch angles as he finally goes further than even his own soldiers will follow.

As his counterpoints we have the muscular humanity of Burt Lancaster. Focusing all his experience as an acrobat and circus performer in his youth, the film is a tribute to Lancaster’s athleticism. With Frankenheimer using a series of tracking shots and uninterrupted long shots, we are shown that without doubt it’s Lancaster jumping from moving trains, rolling down hills, jumping walls and bounding across roofs. Lancaster’s commitment also stretched to mastering many train engineering tasks with such success that he was able to perform them (uncut!) on film. 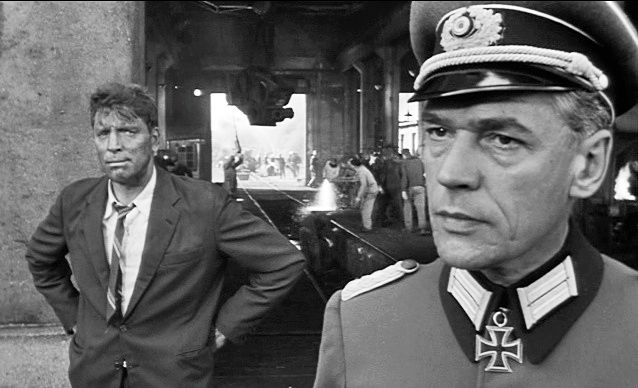 Performance-wise the part falls carefully into Lancaster’s strengths as a tough-guy with a heart. And while at times he feels like what he is – a Hollywood star parachuted into the French countryside to do battle with the Germans – he nevertheless carries the film with a charismatic ease. His emoting – particularly in several speeches decrying the human cost of the operation – verges on the overly emphatic, but few other actors could have carried the near wordless final half an hour with such aplomb. Lancaster’s moral certainty and enraged humanity also makes a perfect contrast with Scofield’s distant amorality and coldness.

The action then takes place on a series of trains that have even greater impact because you know, unlike today, everything was done for real. Each of the crashes, explosions, de-railings and train-based stunt has the freshness and excitement of reality behind it. The real events that inspired the film saw the French Resistance prevent the art train leaving Paris through drowning it in red tape. But that’s a lot less exciting than an ingenious “wrong stations” routine or a desperate chase across the French countryside (and very few Hollywood directors shot France as well as Frankenheimer).

It all makes for an exciting cocktail, even if the central ideas of art vs. life are not explored as well as they could be. It captures that 1960s feeling of “war is hell” as bodies pile up, and Jeanne Moreau’s hotel owner gets a speech on the emptiness of men killing each other. Sometimes you feel The Train wants to delve deeper into the psychology and cost of its events – but then it slaps another train into a collision  and decides to be as much a “man on a mission” film. Either way, it adds enough depth to make it a rewarding watch.
Email ThisBlogThis!Share to TwitterShare to FacebookShare to Pinterest
Labels: Burt Lancaster, Jeanne Moreau, John Frankenheimer, Michel Simon, Paul Scofield, Suzanne Flon, Wolfgang Priess, World War Two