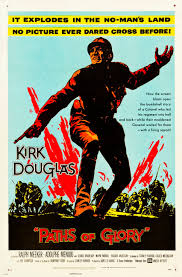 Kubrick’s fourth film is one that often gets overlooked when running over his CV – and it’s had less cultural impact than, say, A Clockwork Orange, 2001 or The Shining – but out of all of his films (except maybe The Shining) it’s the one I’ve come back to the most often, and is certainly his first stone-cold classic. This Word War One tragedy simmers with anti-war sentiment, and it’s so beautifully made and assembled you can see its influence in films right up to 1917.

In 1916 the war is bogged down into trench warfare. Command wants results, an action they can point to, so General Broulard (Adolphe Menjou) is sent by the General Staff to instruct General Mireau (George Macready) to launch an attack on a well defended German position called “the Anthill”. Mireau says any attack would be suicide – until the prospect of his promotion being directly linked to it is mentioned, at which point he becomes the attack’s most passionate advocate. Mireau passes the order onto regiment commander Colonel Dax (Kirk Douglas), who protests that the attack is pointless, but is ordered to lead it or be relieved of his command. The attack is a costly farce, and the humiliated Mireau (with Broulard’s tacit agreement) demands a blood sacrifice – one man from each company will be placed on trial for cowardice and shot as an example for the whole French army. Dax deplores this injustice – but with the administrative meat-grinder as deadly as the one on the front, what hope does he have?

Kubrick believed passionately in the project but also needed a commercial hit in order to bolster his career. So he recruited Kirk Douglas to get the funding – Douglas took a third of the film’s budget as his salary, so it wasn’t all charity – and he rewrote the ending of the book to allow Dax to come up with a last minute solution to get the soldiers off. Douglas, to his credit, was having none of that and demanded a rewrite that restored the book’s original bleak ending.

So it's largely thanks to Douglas we get the shape of the film that we end up with – but it’s clear that it’s Kubrick’s genius that makes it the film it is. Actor and director were a perfect combination here, so much so that Douglas got Kubrick on board to direct Spartacus (an unhappy experience for them both). But Paths of Glory was where both actor and director were working in perfect partnership, both pushing the other to give of their very best. Dax is the perfect Douglas role – decent, intelligent, well-spoken, passionate, a natural leader, but the film undermines all this with his ineffectiveness. Each of his crusades goes wrong, and he fails at every goal he sets himself. Douglas brilliantly captures both sides of this in his generously low-key but committed performance. 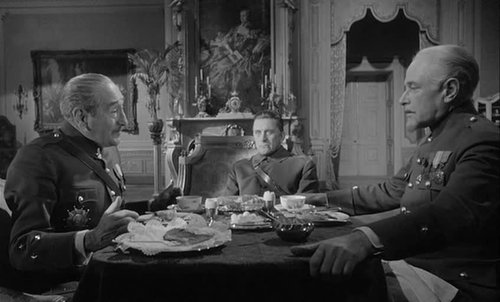 He has a great framework of a film around him from Kubrick. The director uses several longs shots, extended takes and tracking shots to throw us into the world. The opening sequences at the military HQ, taking in the palatial setting of Mireau’s campaign office, have a stately construction and technical formality which then contrasts superbly with the lower angle, tracking shot-laden, POV sequences set in the trenches. Kubrick’s camera glides through these trenches, low angles seeming to make them tower over the viewer, the mud and filth only worse in the body-strewn no-man’s land that stands between the French and the Germans.

It culminates in the attack sequence, one of the greatest battle sequences ever placed on film. Following the doomed advance at a methodical pace, matching the speed of the soldiers, the camera tracks over no man’s land as explosions rend the ground and bodies are thrown to the mud under a hail of bullets. At the front is Dax, vainly blowing on his whistle and encouraging the men forward, while all around him devastation and slaughter win out. Any thought that this wasn’t a pointless enterprise from start to finish is completely dispelled, and our sympathies are completely with Dax and the soldiers, whose lives are superfluous to the ambitions of the generals.

Both generals cut appalling figures for different reasons. Mireau, played with a trumpeting, vain bombast by Macready, is a “blood and guts” soldier who never places his own blood and guts anywhere near the line. Proudly bragging about the skills of his soldiers, then furiously denouncing their cowardice, one telling shot has him in the trenches staring through binoculars at the German positions, oblivious to the wounded men filing past him. Later he orders the shelling of these very trenches in fury at their failure to advance far enough. Broulard is hardly better, Menjou’s “hail well met” bluster hiding a chilling lack of empathy.

The Germans are never seen, because the real enemies here are war itself (and we are kidding ourselves if the same thing wasn’t happening on the other side) and the authorities who push us into it. The film is almost like some sort of black satire, with the generals confidently telling their soldiers they are right behind them, before retreating several miles to the rear to watch the battle unfold. Dax is middle-management, caught between trying his best to deliver orders he knows are impossible, and protecting men he knows are doomed, and failing at both tasks.

The system demands blood sacrifices from the lowest possible rungs, so the hierarchy can reassure themselves they are not blamed (Dax’s offer to take all the blame is promptly rejected by Broulard – no question of any of the officers being at fault!), so the men are chosen by their company commanders. One is chosen by lottery (he of course is a decorated war hero, but that cuts no ice), one because he’s an “undesirable” and the third because he has witnessed his own commanding officer’s cowardice. None of them deserve it, but their guilt is “proved” in a kangaroo court that lasts less than 15 minutes, and in which Dax is barely allowed to put a defence case.

Kubrick’s film becomes a surprisingly fast (it’s less than 90 minutes) but inexorable march towards those three stakes in the ground and the firing squad. Questions of justice and courage are completely pointless – any brave acts in the film are pointless, two of the victims are cited for their courage and the most cowardly character in the film, Wayne Morris’ snivelling Lt Rouget, ends up commanding the firing squad – and the message we are left with is that the institution of war and man are the real villains here.

War has no heroes, only survivors. Victories are important to the generals only in the sense of being tools to jockey for position, and the common soldier is an expendable puppet who can be killed on a whim to fill any political reason. It’s a harsh and chilling view of the military – and leaves very little hope – but it’s superbly made and controlled by Kubrick, in a film surprisingly with more heart in it than any film he ever made before or since. It’s a film that leaks with sorrow and disgust at the victims of the military machine, a film with emotion as well as a technical marvel. It might be Kubrick’s most complete film.
Email ThisBlogThis!Share to TwitterShare to FacebookShare to Pinterest
Labels: Adolphe Menjou, Courtroom drama, George Macready, Joe Turkel, Kirk Douglas, Ralph Meeker, Richard Anderson, Stanley Kubrick, Timothy Carey, War film, Wayne Morris, World War One