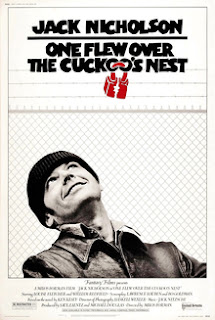 One Flew Over the Cuckoo’s Nest is one of the landmark films of the 1970s, one of those films that’s on everyone’s list for great masterpieces. It lifted all five of the Big Oscars (Picture, Director, Actor, Actress and Screenplay), one of only three to do so. It’s widely loved for its celebration of rebelliousness and individualism, but there is more to the film than that. It’s as interesting for the things it doesn’t explore as much as the things it does.

Randle McMurphy (Jack Nicholson) has himself sent to a mental institution rather than a prison farm, under the belief that serving his time in the institution will be far easier than doing hard labour. However, he finds the ward he is locked into is under the authoritarian control of Nurse Ratched (Louise Fletcher), a passive-aggressive bully with a strict interest in the rules at the cost of all humanity. The inmates are cowed, but McMurphy encourages them to express themselves and seize their freedoms – little realising that his freedom is dependent on being signed off by the doctors, not the length of his original short sentence, and he has made no friends in the hospital authorities – or that Ratched is determined to break his influence over the other patients.

Forman was a perfect choice for directing a film that directly echoes his own iron-curtain upbringing. OFOTCN is a film that celebrates the freedom of the individual – but also recognises that authority and the state always wins out in the end. The hospital ward is cold, oppressive, a white-lined world where Ratched observes and quietly controls everything from her booth, softly issuing directives that carry a quiet menace. The film rotates around clashes between McMurphy wanting to do his own thing and Ratched stridently reinforcing a fixed hospital agenda. At one point Forman’s camera tracks from McMurphy on the basketball court, up to Ratched watching behind a full length window like an imposing Stasi officer. Forman totally understands the struggle of expression and free will in oppressive regimes, and it’s this that has given the film such a rich life – who doesn’t want to land on the side of freedom?

It helps as well that representing freedom we have possibly Jack Nicholson’s finest performance as McMurphy. A roaring, bubbling, manic, burst of nature, an impish anti-authority figure who rips through every scene with intense energy. It’s a marvellous, inspiring performance. And it makes McMurphy exactly the sort of rebel without a cause we would like to be, the guy who can inspire and lead through force of will alone, who refuses to be cowed or crushed.

Nicholson’s performance however is a perfect mixture of larger-than-life drama and moments of reflection. The film splices in a few conversations between Nicholson and the doctors that, over the course of the film, change more and more from spry defiance and mockery towards a quieter, more despairing resignation as he slowly begins to realise how trapped he is. Not that he wants to show any of that to his fellow inmates, or to Ratched with whom he keenly engages in a battle of wills.

Ratched herself is exactly the sort of cold, rules-bound, inflexible authority figure we are naturally placed to hate. Louise Fletcher is wonderful, with her softly spoken iciness matched with certainty about her moral position. Is she even interested in curing the patients? Her focus seems to be completely on controlling and running the patients’ lives rather than changing the status quo. 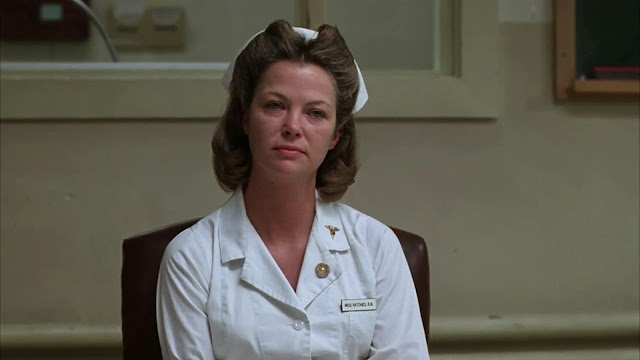 This battle of wills drives the film, but it’s interesting as well for what it tells us about McMurphy. He seems to have no understanding of the fact that, while his fellow inmates are cowed, they are all to some degree mentally ill and certainly all frightened and unpredictable. McMurphy sees them as people who need to be encouraged to seize their own destinies, but these are people who are incapable of really understanding what McMurphy is trying to do or have any interest in it. He shakes up their world, but has little real impact on them in the long term.

It’s not a film that engages in any great understanding of mental illness, but suggests that perhaps McMurphy and Ratched are in their own ways as insane as the people they are fighting over in the asylum. McMurphy is a self-destructive force who pushes for small things with huge passion, but then drifts through the major things. He acts without thinking and doesn’t try to understand the people around him. Ratched meanwhile is so obsessed with controlling her own small universe, she has defined her entire life around her governance of the ward.

The film has a slightly troubling relationship with women – which is not necessarily a criticism, but an observation since the film’s only prominent female character is Ratched and all the inmates are men. The things that Ratched stops the men from doing are the sort of typically “male” activities that McMurphy delights in – gambling, sports, girls – while McMurphy himself is (in what is the only truly dated moment in the film) in the slammer partly for having under-age sex with a girl, which he eagerly describes to his doctor. McMurphy pushes all the inmates to become more like the sort of man he understands men should be, and while it is a freedom of expression, it’s also one that has little place for women in it, other than as sex objects.

But that’s not the real aim of the film, so you can forgive it. McMurphy is not an intellectual or a man on a mission, he’s an unthinking burst of energy that burns up the world around him and demands the freedom to not be told what to do. That’s what gives the film its real emotional impact and why it spoke so much to Vietnam era America, and continues to speak to us today. And of course it’s linked to the fact that the film is a massive tragedy. 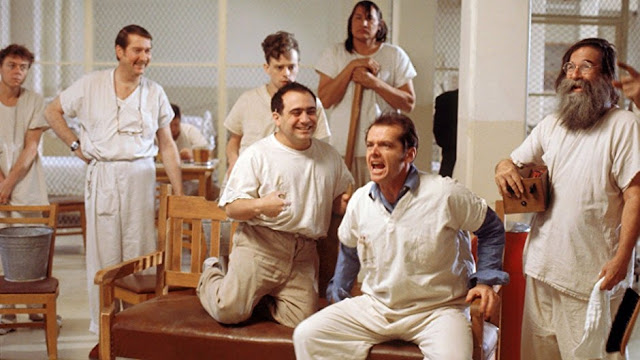 Because in the end the forces of oppression do win and McMurphy’s spirit is crushed. Sure McMurphy more than contributes to his own failures – he allows his own to drift away, and his pushing of his own agenda of what he feels men should want dooms poor Billy Babbit (a stuttering slice of timidity played by Brad Dourif). The film has a Pyrrhic victory in his inspiring the “Chief” (William Sampson), a giant native American flying under the radar by pretending to be deaf and dumb, into carrying out McMurphy’s dreams.

But for our hero it’s a bust. Forman’s film is a brilliant celebration of the energy and futility of lords of misrule like McMurphy, with a commanding performance from Jack Nicholson that’s one for the ages. A wonderful piece of ensemble playing in a set that becomes a metaphor for oppressive regimes, it’s remained remarkably undated and a force to be reckoned with on any top ten list.
Email ThisBlogThis!Share to TwitterShare to FacebookShare to Pinterest
Labels: Best Picture, Brad Dourif, Christopher Lloyd, Danny DeVito, Jack Nicholson, Louise Fletcher, Milos Forman, Scatman Crothers, Social issues, Will Sampson, William Redfield