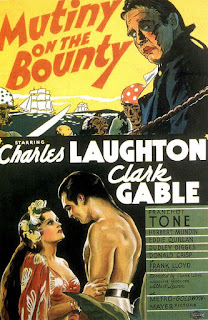 “They respect but one law – the law of fear…”. So hisses Charles Laughton as the definitively monsterish Captain Bligh in this Oscar-winning version of the most famous mutiny ever. It’s the quintessential adventure on the high-seas motion picture (never mind that the actual ship used could only get a few miles off the coast), but it’s also a feast of good acting and Hollywood class: the only picture to get three nominations for Best Actor, as well as the last Best Picture winner to only win one Oscar. It cemented the ideas around Bligh and Fletcher for generations.

Heading out on a two-year voyage in 1787 to transport breadfruit from Tahiti to the West Indies, the Bounty sets sail from Portsmouth with several members of the crew freshly pressganged. In command is self-made man Captain William Bligh (Charles Laughton), while his second-in-command is gentleman Fletcher Christian (Clark Gable). A pair of fine sailors, the two of them are separated only by their methods. Fletcher is a man of the people, a motivator with a firm hand. Bligh is a man with just a firm hand, who never uses a dozen lashes of the crew when two dozen will do. Fletcher becomes more and more alienated by Bligh’s ruthless methods.

Frank Lloyd bought the rights to a novel that fictionalised the mutiny (introducing Roger Byam, a fictional version of Peter Heywood who later become a Post-Captain in the navy) with the intention of directing and playing Bligh himself. Fortunately he was persuaded to step aside on the acting front for Laughton, who is seized the part with relish.  Shoulders scrunched and neck jutting his head forward, with his lip curled, this is a Bligh constantly on the look-out for offence, a martinet whose anger stems from a self-loathing within. A chippy middle-class boy made good, he’s determined to enforce the letter of the law, and while a bully with no empathy he’s not exactly a bad man, just a bad captain. Laughton’s performance simmers with bitterness and a relish for being obeyed.

He makes a neat contrast with Clark Gable at his matinee idol finest. Worried about taking the role because it demanded the shaving of his lucky moustache (no facial hair in the navy), Gable gifts Laughton the flashier role to play the decent hero with only the best for his fellow man at heart. Gable’s Christian is decent, understanding, a natural leader who has a firm eye for justice. Not even bothering with the British accent, but settling for a mid-Atlantic ease, Gable is the Hollywood superstar to his core, his Christian the quintessential romantic ideal. 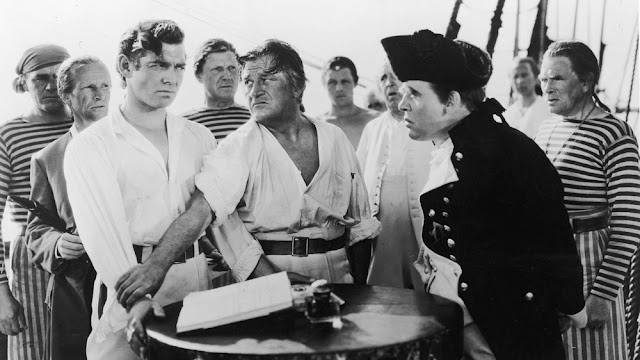 Between the two of them runs Franchot Tone’s Midshipman Roger Byam. Tone is the often forgotten third nominee for Best Actor, but he has in many ways the trickier part, which he handles with aplomb: the naïve young man who wants to serve his captain and his country, but also understands that his captain is not a man of justice. Tone gets the film’s highlight, a final speech to the court martial that helps make everything turn out alright, but his tortured pleading for justice and moral righteousness is delivered with a humble and effective forthrightness.

Lloyd has these fine performances (plus some great work from Mundin, Crisp, Digges, Quillan and others as assorted ship’s crew) and sets them all out perfectly on a film that captures the heart of the epic. The ship is brilliantly constructed and assembled, and Lloyd’s film reconstructs everything from day-to-day travails on sea to the impact of storms. The mutiny when it comes is shot with an Eisensteinesque immediacy, while he also manages to shoot Tahiti with a dreamlike paradise sheen. He paces perfectly the growing sense of tension and unresolvable fury between Bligh and Christian.

And he certainly gets a brilliant sense of the cruelty and sustained violence of Bligh’s rule on the boat, as floggings come thundering down on the backs the sailors – often for the very meanest of reasons. A keelhauling (despite one moment of laughably bad model work) is brutal in its harshness. Bligh’s first act on boat is to flog a dead man (after all death doesn’t wipe out the need for punishment) and he goes from there. The film does give time to admire Bligh’s seamanship – and reconstructs surprisingly well his awe-inspiring open boat trip over 4,000 miles to take him and loyalists back to a safe port. Meanwhile Christian heads for the safety of Tahiti, a blissful series of images of our decent sailors enjoying homespun pleasures and hot Tahitian wives.

Of course it’s not actually what happened really. Bligh was a difficult, priggish and rather cold person with low personal skills but he wasn’t the monster he seems here. Christian had a certain aristocratic pull over the men, but he was also probably far more twitchy, young and stupid than the assured, experienced sailor he is here. Bligh’s ship wasn’t the bastion of cruelty it is here (punishments seemed in line with the rest of the navy, or even a little less according to the log), but Bligh’s lack of understanding of how men work and his endless drive, matched with his sailors’ seduction by the charms of an easy life on Tahiti perhaps led to the outbreak. Either way Bligh definitely didn’t command the HMS Pandora to hunt the sailors down, nor did the investigation into the matter end with him being snubbed as a wrong ‘un by Lord Hood.

But hey, if you know that this is legend printed as fact it’s fine. Because Lloyd’s film is still superbly entertaining, has three excellent performances among a fine ensemble cast and while its version of Bligh may be a monster made up, Laughton invests him with enough humanity and self-loathing you’ll despair at his poor choices as much as you’ll hate his cruelty. Prime Hollywood entertainment, perfect for any time.
Email ThisBlogThis!Share to TwitterShare to FacebookShare to Pinterest
Labels: Best Picture, Charles Laughton, Clark Gable, Donald Crisp, Dudley Digges, Eddie Quillan, Franchot Tone, Frank Lloyd, Henry Stephenson, Herbert Mundin, Historical epics, Spring Byrington