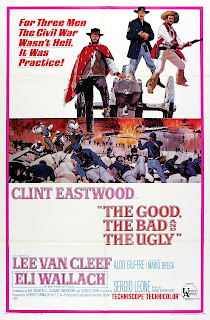 The Good, the Bad and the Ugly closed out Sergio Leone’s “Man with No Name” Western trilogy, the role that turned Clint Eastwood into a star. Unlike the other two films in the Dollars series, TGTBTU was shot on a larger and more expansive budget, and showed Leone stretching himself into something more than a peddler of Americana pulp. This was a film that was as much an artistic statement as it was an entertainment – perhaps more so.

The plot of the film is very simple – considering its extended runtime. Three bandits and hired guns are on a quest for buried gold, while all around them the American Civil War rages. The bandits are: “The Good” (Clint Eastwood) – the taciturn “man with no name” who has more of heart than he lets on; “The Bad” (Lee Van Cleef) – known only as “Angel Eyes”, a stone-cold killer with no soul at all; and “The Ugly”, Tuco (Eli Wallach), a larger than life Mexican bandit, scruffy, scuzzy but with plenty of joie de vivre. The money is hidden somewhere out in a graveyard in the West – but who is going to get there first?

TGTBTU is Leone at a midway point of his career. Tonally the film falls between the more straightforward thrills of the first two Dollars films, and leans closer towards the artistic epic canvasses that Leone would paint in his Once Upon a Time… films. Perhaps this is why TGTBTU is possibly the most popular of all Leone’s films, it’s more entertaining than either of the latter two but has more thematic depth than the earlier two. But that doesn’t change the fact that, watching it, I feel this is reaching for a moral and thematic richness and complexity that is just beyond Leone’s grasp. He’s straining for this film to be something more than his earlier films – and I’m not sure that’s something he manages to do.

But let’s focus on what the film does right, which is a hell of a lot. This is the film where Leone really found his voice and ran with it. It’s a hyper real world he creates of the Old West, with a tone of artificiality about it. Part of that comes from the odd disconnect you get from the European actors and the dubbed voices that overlay them (not always completely accurately), but it’s there in every inch of the style of the film.

It’s an explosion of style, with artificiality frequently alongside reality, all thrown together into a sort of crazy Western world where everything seems to be happening at once (from bandit towns to the Civil War), and you could turn a corner and end up in either a desert, a battle field or a town under siege. His style is heightened, and makes for some wonderful shots, not least the way first Blondie and later Tuco’s banditos seem to drop into a wider frame, expanding the world suddenly as we watch it.

Leone’s a director who practically invented the term “operatic” for cinema. His gun battles are 99% build up and 1% action, and it’s the simmering tension of those build-ups that really make his films stick in the mind. If you think of it, you’ll imagine that iconic Ennio Morricone score (recorded before the film was shot, so Leone could shoot the film to match it – composers dream of having such licence today!), followed by slow series of escalating cuts. Leone will cut to hands approaching triggers, then close ups of faces, then long shots for context, then all of these again and again, each time the hands getting closer, the close-ups getting tighter, the long shots being more prolonged, all of it about building the tension and then BANG the shooting is done in seconds.

The film was criticised for being violent at the time, but it’s more like extremely tense. You can see why Tarantino sites Leone as his master. Watch that introduction sequence for Angel Eyes, a long, quiet scene where he eats a peasant’s food while questioning him and then ends by a sharp series of shootings that leave the family devastated. It’s the style Tarantino was going for in Inglourious Basterds and a tone establisher for Leone. You always know the violence is coming, and you know it will be quick and merciless when it does, but the film makes you sit tensely waiting for it for minutes at a time. The violence when it comes is often cold and those who carry it out are cynics and thieves rather than heroes and villains.

It makes for a sprawling, epic, even rather unfocused film at times – and it means the runtime is hopelessly overextended at over three hours uncut – but it’s also what interests Leone. He sees a world where killers are cool, calm, calculating and don’t go in guns blazing. Where intimidation is an art and micro-calculations occur before any trigger is squeezed. 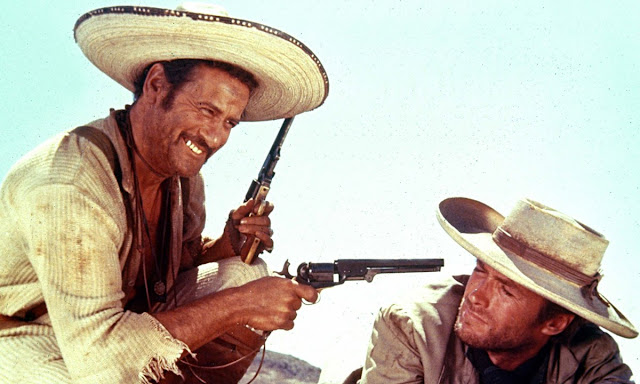 And these ruthless killers are in a world of violence all around them. Around the edges of the film’s narrative, the world of the Civil War rages, claiming lives left, right and centre. It’s here that Leone targets a thematic richness that I don’t feel is completely successful. There are elements that work – and the Union prison camp that Blondie and Tuco end up in (staffed by sadistic guards under the guidance of Angel Eyes) is the best of them. Clearly paralleling Nazi extermination camps in the herding of prisoners, the trains that carry them to certain death, the brutal beatings and the Yankee soldiers who are forced to play music (literally for their lives) to cover the noise of those beatings, you can feel Leone’s anger at the horror mankind unleashes on itself.

But it’s heavy handed at places and makes its points too bluntly, dropping them into the film rather than weaving them neatly into the overall narrative. Towns and villages are bombed out and dead men lie on the edge of roads, but it doesn’t really get tied into an effective contrast with the central treasure hunt narrative. This is Leone straining for greatness, but not having the chops to get there yet. Blondie may bemoan the pointless slaughter of civil war – and even comfort a dying soldier – but these beats could be removed from the film without affecting its overall impact. Leone’s real love is Americana pulp, and his focus on this sometimes gets in the way of achieving his wider aims.

Perhaps that’s also because the impact gets lost slightly in the film’s great, sprawling length – and Leone’s lack of discipline, his insistence in taking everything at his own pace (often a slow dawdle through details), while it works really well for some sequences it also gives us others (such as Tuco running through a graveyard) that seem to last forever for very little impact.

Leone also increasingly became more a director with epic visuals in which characters are only details, with this film. Eastwood – reluctant to return in any case – especially feels like a much blanker presence in this film, coasting through his role almost on autopilot. Although you could say he generously cedes much of the limelight to Eli Wallach, who roars through the film as Tuco. Wallach’s eccentric but heartfelt performance – full of odd mannerisms but underscored with a genuine emotional vulnerability at points matched with a childlike enthusiasm – becomes central to the enjoyment of the film (he’s really the lead character). Van Cleef meanwhile drips demonic, cold menace behind unflinching (Angel) eyes.

Leone’s epic work is a sprawling, over extended, self-indulgent epic that mixes moments of pure cinematic entertainment with heavy handed digressions into man’s inhumanity that are a little too on-the-nose and unthreaded into the central plot to carry as much impact as they should. But it remains one of the most popular films of all time partly because what it does well, it does better than almost anyone – those long, tense build-ups, that electric energy that Wallach represents, the otherworldly artificiality mixed with cold reality. The Good the Bad and the Ugly is Leone’s crowning achievement, and for all its flaws, it still packs a punch.
Email ThisBlogThis!Share to TwitterShare to FacebookShare to Pinterest
Labels: Clint Eastwood, Eli Wallach, Historical epics, Lee Van Cleef, Sergio Leone, Spaghetti Western, Westerns