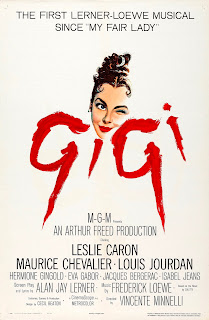 In 1958 Gigi was littered with Oscars, winning all nine of its nominations to become one of the most successful films at the ceremony ever. It’s bizarre considering this is a run-of-the-mill musical with all the production values you would expect from an Arthur Freed production, but not really anything special compared to several other films from the same stable. It’s one of those moments when you remember Singin’ in the Rain didn’t even get nominated for Best Picture.

Anyway, based on a book by Collette, Gigi deserved some sort of award for sneaking under the Hays code a story about a young girl training to be a courtesan, and the heartless playboy her family want her to seduce. Leslie Caron is Gigi, while the man who she has a sisterly affection for is Gaston (Louis Jourdan), the man around town bored with all the artificiality around him. Both Gigi and Gaston are heavily guided by their mentors: in Gigi’s case her grandmother, famed former courtesan Madame Alvarez (Hermione Gingold), in Gaston’s his uncle Honoré (Maurice Chevalier) a charming old rake. Everyone wants the two of them to become lovers, but do Gigi and Gaston want the sort of relationship of convenience their mentors expect?

That the film exists at all is a triumph of careful negotiation between Freed and the Hays Code, not usually open to films about high-class prostitutes and their marks. It does make for an occasional bit of confusion from the viewer – and a truncated plot as key ideas are circuited around (or over) – but also marvellous scenes, well written by Alan Jay Lerner, where Madame Alvarez and her sister (and courtesan trainer) Aunt Alicia (Isabel Jeans) discuss Gigi having “matured” to the correct age to become Gaston’s mistress by using unfinished sentences and raised eyebrows.

It makes for a slightly odd viewing experience today, especially with our far more enlightened views of the role women can have in society. The film mines comic material out of Gaston’s jilting of an unfaithful mistress (including Honoré toasting him for having driven the poor girl to attempted suicide after her public humiliation), while the comedic training sequences as Alicia attempts to turn Gigi into every man’s dream of the perfect mistress carries more than a whiff of exploitation today. But the film comes from a different r time, where such matters wouldn’t have occurred to either audiences or film makers.

Theres is a similar vibe in the film’s now most notorious sequence (and its opening) as Maurice Chevalier’s Honoré introduces the film and its world by crooning “Thank Heaven For Little Girls”. It’s a great catchy song (wonderfully delivered by Chevalier) but its lyrics thankful that “little girls get/Bigger every day”, matched with the septuagenarian Chevalier leering at a group of schoolgirls playing in the park, carry more than a whiff of the paedophile today.

While you could say that this is all part of Minelli and Lerner’s intentions – that under the elaborate design of the film, there runs an undercurrent of selfish men carelessly using women for their own entertainment and many women enabling and encouraging this – it’s presented with such lightness, froth and charm that any potential darkness underneath it gets lost all together. Instead, its charming outer confection tends to obscure the difficult morals under the surface and prevents the viewer from engaging with them.

And the film’s design is what it’s really about. The first major musical to be shot largely on location – compare to An American in Paris which recreated the city of romance on a sound stage – its camera work is fairly reserved and focused on admiring the sets and locations more than providing a bit more to really engage the eye with. The design is impressive, mixing art nouveau and Cecil Beaton’s elaborate style, and the sets and costume (all Oscar-winning of course) really impress, even if the opulence ends up becoming overwhelming, not least with the overpowering reds that fill Gigi’s rooms. Minelli’s love of opulence and art ends up crushing the film.

That design also overwhelms the character. It’s telling that among its nine nominations, not a single one was for acting. Leslie Caron and Louis Jourdan do perfectly acceptable jobs, but their characters are not particularly interesting. Surprisingly for a musical – one starring Leslie Caron! – there is no dancing either. The film really misses the presence of people like Gene Kelly, the kind of leading man or woman who could carry a film on charisma. The real charisma comes from Chevalier (the one surprise to miss an Oscar nomination), who is so perfect as Honoré, so charming and dry (and who delivers his songs so well) that the film flags dramatically when he is absent (which he is for much of the final act). But the film misses a real heart.

It makes for a film that looks good, but is more a triumph of style and ingenious storytelling than it is storytelling with impact. Its Oscar win is perhaps a tribute to its faultless opulence and big budget spectacle. Because, boiled down to it, it’s a film with a story that hinges slightly on things that aren’t exactly tasteful revolving around people who aren’t very interesting. It has some good songs and moments from the Alan Jay Lerner script, but there is a reason this Best Picture winner has stuck in the collective memory so little, despite its record-breaking haul.
Email ThisBlogThis!Share to TwitterShare to FacebookShare to Pinterest
Labels: Best Picture, Eva Gabor, Hermione Gingold, Leslie Caron, Louis Jourdan, Maurice Chevalier, Musicals, Vincente Minnelli